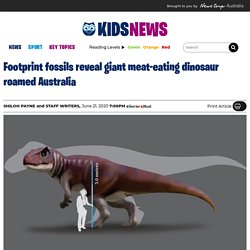 The gigantic dinosaurs once roamed the lands that now are home to Toowoomba, Oakey and Ipswich in Queensland, new research has revealed. The University of Queensland study, led by palaeontologist* Dr Anthony Romilio, looked at southern Queensland dinosaur footprint fossils* dated to the latter part of the Jurassic Period*, between 165 and 151 million years ago. “I’ve always wondered, where were Australia’s big carnivorous* dinosaurs,” Dr Romilio said. “But I think we’ve found them, right here in Queensland. “The specimens* of these gigantic dinosaurs were not fossilised bones, which are the sorts of things that are typically housed at museums. “Rather, we looked at footprints, which, in Australia, are much more abundant*. Biggest ever dinosaur – Kiwi Kids News. Fossilised last meal of plant-eating dinosaur found in Alberta, Canada. Scientists have found a beautifully preserved, fossilised meal inside the skeleton of a dinosaur. 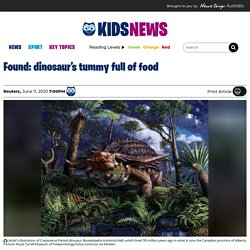 The meal of tender fern fronds — eaten in a forest regrowing after a bushfire 110 million years ago — was the armoured dinosaur’s last. It died soon after, perhaps drowning in a river or a flash flood, and was washed out to sea. The Sahara Desert Was Once Home To Earth's Most Vicious Dinosaurs Kids News Article. The Sahara Desert, which encompasses over 3.6 million square miles of Northern Africa, is one of the harshest and most inhospitable places on the planet today. 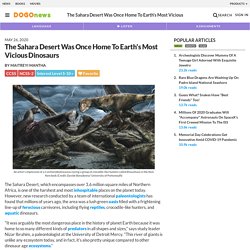 However, new research conducted by a team of international paleontologists has found that millions of years ago, the area was a lush green oasis filled with a frightening line-up of ferocious carnivores, including flying reptiles, crocodile-like hunters, and aquatic dinosaurs. "It was arguably the most dangerous place in the history of planet Earth because it was home to so many different kinds of predators in all shapes and sizes," says study leader Nizar Ibrahim, a paleontologist at the University of Detroit Mercy. "This river of giants is unlike any ecosystem today, and in fact, it's also pretty unique compared to other dinosaur age ecosystems.

" The team's findings are based on the thousands of fossils recovered from two decades of paleontology expeditions to the Kem Kem beds. Resources: udmercy.edu, www.ibtimes.com, yahoo.com. Elaphrosaur vertebra fossil found at Eric the Red West dig site in Victoria, Australia. A volunteer archaeologist* has dug up the first fossil ever found in Australia of a long-necked dinosaur called elaphrosaur. 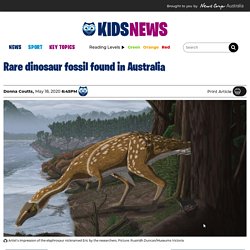 The rare find extends the global range of this cousin of T-rex and Velociraptor. Experts know from Jurassic-era* fossils found in China that these theropods had teeth when young but a beak when an adult, indicating it may have begun life as a carnivorous predator but changed to be a plant eater as it matured. The theropod family of dinosaurs includes all of the known predators. Elaphrosaur was about 2m long from head to tail, had short front arms with four fingers on each and would have been a fast runner. There are just three known elaphrosaur species from fossils found in China, Argentina and Tanzania.

River dinosaur Spinosaurus aegyptiacus hunted prey across Sahara using powerful tail as propeller. A terrifying river “monster” was so big, so powerful and so different scientists believe it could topple T-rex as the most famous and exciting meat-eating dinosaur. 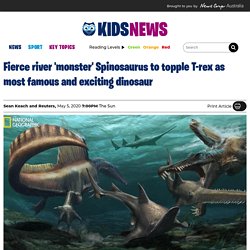 Spinosaurus aegyptiacus hunted prey across the Sahara Desert 95-100 million years ago and is the first aquatic* dinosaur known to science. This 6-7 tonne predator is believed to have been an excellent swimmer. It would’ve been propelled by a huge finlike tail, allowing it to hunt for prey in what were once vast river systems across the Sahara. Vicious ancient crocodile 'ruled before the dinosaurs' - CBBC Newsround.

Jorge Gonzales Scientists have discovered a vicious type of crocodile that they say would have been one of the top predators before the dinosaurs came along. 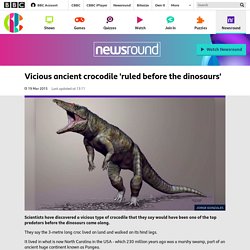 They say the 3-metre long croc lived on land and walked on its hind legs. It lived in what is now North Carolina in the USA - which 230 million years ago was a marshy swamp, part of an ancient huge continent known as Pangea. The croc would have competed with other snappy reptile predators, eating smaller reptiles and mammals. How long was a dinosaur’s day? - Double Helix. By David, 12 March 2020 News Fossil shells like this one contain details of dinosaur day lengths Image: Wikimedia commons/Wilson44691 The dinosaurs lived many millions of years ago. 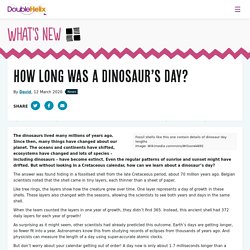 Since then, many things have changed about our planet. The oceans and continents have shifted, ecosystems have changed and lots of species – including dinosaurs – have become extinct. Ancient circle of Ice Age woolly mammoth bones. Archaeologists are uncovering a mysterious ring of mammoth bones built by our ancient ancestors. 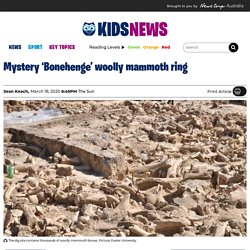 Nicknamed ‘Bonehenge*’ the structure has been dated to around 20,000 years ago – during the last Ice Age. The ring is located on the Russian Plain*, and was likely built by Palaeolithic* hunter-gatherers. And it was created at a time where temperatures in the winter were often as low as -20C. There are more than 70 strange bone structures in the area, but this site – named Kostenki 11 – is believed to be the oldest. “These finds shed new light on the purpose of these mysterious sites,” said Dr Alexander Pryor, of the University of Exeter, UK, who led the study of the structures, first discovered in 2014. “Archaeology is showing us more about how our ancestors survived in this desperately cold and hostile* environment at the climax* of the last ice age. Archaeological dating puts the bone circle at around 20,000 years old, when the last Ice Age was reaching its coldest point. 2.

Small birdlike dinosaur head found embedded in amber in Myanmar. The world’s smallest dinosaur has been discovered — and it looks like a miniature pigeon. 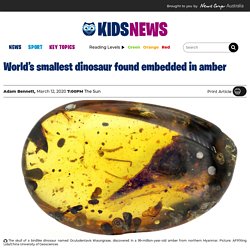 The 100 million-year-old bird, just 5cm long, had bulging lizard-like eyes and a beak packed with 100 sharp teeth. Its tiny head was found preserved in amber — fossilised tree resin or sap — and has “blown away” scientists, who said it “looks like it died yesterday”. The dinosaur, named Oculudentavis khaungraae, lived in present-day Myanmar 100 million years ago and would have weighed less than 28g. It would have been roughly the same size as today’s smallest bird — the bee hummingbird. The fossil’s head is smaller than a blueberry but the perfectly preserved details are visible using 3D imaging. New-view-of-dinosaurs-could-radically-reshape-their-family-tree-20170323-gv4zir. Science News for Students. Some 90 million years ago, two-footed meat-eating dinosaurs began undergoing big changes. 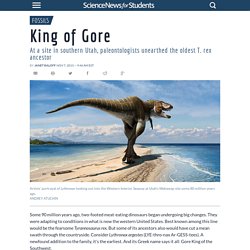 They were adapting to conditions in what is now the western United States. Best known among this line would be the fearsome Tyrannosaurus rex. 'Big-nose horn-face' dino found, in Utah desert in US - CBBC Newsround. Bus-Size Sea Monster Found, Took On Prey Its Own Size. A new species of prehistoric sea monster unearthed in Nevada chowed down on prey its own size—the first ocean predator that evolved to do so, a new study says.

(Explore a sea monster interactive in National Geographic magazine.) Thalattoarchon saurophagis—which translates to "lizard-eating sovereign of the sea"—was at least 28 feet (8.6 meters) long and lived about 244 million years ago during the Triassic period, said study co-author Nadia Fröbisch of Berlin's Museum of Natural History. The bus-size beast was an early ichthyosaur, part of a group of reptiles that prowled the world's seas during the dinosaur era. The Thalattoarchon fossil, partially excavated in 1998, was unusually well preserved, including the skull, fins, and entire vertebral column. "It is pretty amazing, particularly for an animal this size," said Fröbisch, who is also a National Geographic explorer.

Three new dinosaurs found in Australia. Big news for dinosaur fans - experts on the scaly beasts reckon they've discovered three new species after checking fossils dug up in Australia. One of the creatures is thought to have been a fearsome predator, with three large slashing claws on each hand. The others were plant-eaters, with one being tall and giraffe-like and the other more stocky, like a hippo. The fossils date back nearly 100m years and were found in rocks known as the Winton Formation in Queensland. Palaeontologist Scott Hucknell, from the Queensland Museum, said carnivore Australovenator wintonensis - who's been given the nickname Bingo - was even bigger and more terrifying than velociraptors. "Banjo was light and agile," he said. CBBC - Newsround - Fossils discovered of a new gigantic dinosaur.

Unearthed in northeastern China, Linhenykus monodactylus is a member of the theropod dinosaurs, the group of two-legged carnivores that includes Tyrannosaurus rex and Velociraptor. Most theropods had three fingers on each hand. But Linhenykus belongs to a family known as the alvarezsauroids: small, long-legged dinosaurs that had one big finger alongside two barely functional nub fingers. CBBC - Newsround - T-rex dinosaur cousin discovered. Chinese baby dragon: the new feathered species of dinosaur - CBBC Newsround. Image copyright Zhao Chuang/PA Wire We've all heard of the Stegosaurus, Triceratops and, of course, the Tyrannosaurus rex. New type of Jurassic dinosaur crocodile is discovered! - CBBC Newsround. Image copyright Fabio Manucci/University of Edinburgh.