Top 10 Animal Adaptations. The blue-tongued skink scares away predators with its horrific UV tongue. When cornered by predators, some animals use "deimatic displays" to scare their stalkers into leaving them alone. 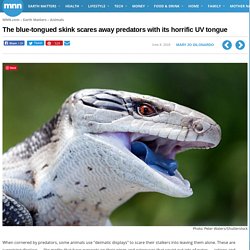 These are surprising displays — like moths that have eyespots on their wings and octopuses that squirt out jets of water — actions and details intended to momentarily startle the predator. The blue-tongued skink has a colorful variation on this theme. When attacked, the lizard opens its mouth wide and reveals its bright blue, ultraviolet-reflective tongue. The flash of color startles predators, often giving the skink a chance to escape.

New research from Macquarie University in Australia finds that the very back of the tongue of the northern blue-tongued skink is much more UV-intense and luminous than the front. The northern blue-tongued skink (Tiliqua scincoides intermedia) lives in northern Australia and is the largest of the blue-tongued skinks. The researchers found that the skink waited until the final stages of a predator attack to show the full display of its tongue. Why bluetongue lizards’ tongues are blue. Bluetongue lizards use their tongues as a last-ditch effort to avoid being eaten, according to the latest research from the Lizard Lab at Macquarie University in Sydney. 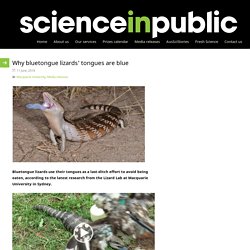 Other videos and images at The base of their tongue is particularly bright under UV light – which birds can see clearly. The lizard relies on camouflage to avoid hawks and other predators. When that fails, the lizards poke out their tongues as far as possible distracting the birds with a flash of bright blue and ultra violet tongues. And yes, you would see the bright tongue under disco lights. “Blue tongue lizards have a highly conspicuous tongue, but unlike many other kinds of lizards, it’s a big tongue—the surface area is large. “Blueys did not respond much to the piece of wood (control) while they showed a strong response to the model predators that would normally represent the greatest threat. Full release from Macquarie at.

Why do tapirs like being underwater? Animal Adaptations. Penguin wave better than a group hug! Animal and plant adaptations. Variations and adaptations. Adaptations and survival. Why pandas are black and white - CBBC Newsround. How Do Flamingos Stand on One Leg? Today’s Wonder of the Day was inspired by Bob. 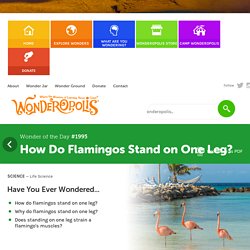 Bob Wonders, “How can flamingos balance with one leg?” Thanks for WONDERing with us, Bob! We were getting ready to watch the sun set over the Wonderopolis waterfront the other day when we overheard an interesting conversation between a sea gull and a flamingo: Sea Gull: Hey there! My name's Babs. Flamingo: Nice to meet you, Babs. Sea Gull: I'm new to the area. Flamingo: Oh year? Sea Gull: No, I know you're pink because of what you eat. Flamingo: Ha! We firmly believe that Frank was just pulling Babs' leg, but their conversation did make us WONDER about exactly why — and how — flamingos stand on one leg while they sleep. Standing on one leg is not natural — or easy — for human beings to do for any length of time.

Scientists who have studied flamingos have observed this behavior for a long time. Some think that flamingos stand on one leg to dry it off from time to time, since they spend so much time in the water. Variations and Adaptations. Students discover that variation in plants allows some varieties to survive in near-drought conditions. 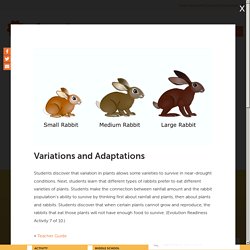 Next, students learn that different types of rabbits prefer to eat different varieties of plants. Students make the connection between rainfall amount and the rabbit population's ability to survive by thinking first about rainfall and plants, then about plants and rabbits. Students discover that when certain plants cannot grow and reproduce, the rabbits that eat those plants will not have enough food to survive. (Evolution Readiness Activity 7 of 10.) » Teacher Guide PLEASE NOTE: This activity can be assigned, but student responses will not be saved. Requirements This resource requires Java. Using OS X 10.9 or newer? Skoool™ - Adaptations and survival. BBC Nature - Adaptations and behaviours.