One Flew Over the Cuckoo's Nest

5 Psychological Experiments That Prove Humanity is Doomed. One Flew Over the Cuckoo's Nest - EFHS American Literature. OFOTCN themes & examples. Ken Kesey describes his first LSD trip. Indian termination policy. Indian termination was the policy of the United States from the mid-1940s to the mid-1960s.[1] The belief was that Native Americans would be better off if assimilated as individuals into mainstream American society. 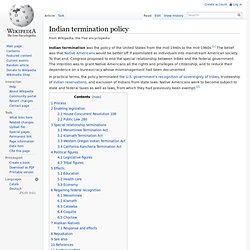 To that end, Congress proposed to end the special relationship between tribes and the federal government. The intention was to grant Native Americans all the rights and privileges of citizenship, and to reduce their dependence on a bureaucracy whose mismanagement had been documented. In practical terms, the policy terminated the U.S. government's recognition of sovereignty of tribes, trusteeship of Indian reservations, and exclusion of Indians from state laws. Native Americans were to become subject to state and federal taxes as well as laws, from which they had previously been exempt.[2] Process[edit] TIL that in the 50s & 60s the American gov forcibly removed Native American children from their parents and put them up for adoption or into institutions, in order to have them assimilate into "white culture". : todayilearned. 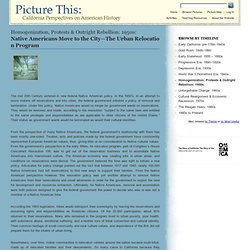 In the 1950’s, in an attempt to move Indians off reservations and into cities, the federal government initiated a policy of removal and termination. Under this policy, Native Americans would no longer be government wards on reservations. They would be removed and made, according to the resolution: “subject to the same laws and entitled to the same privileges and responsibilities as are applicable to other citizens of the United States.” Their status as government wards would be terminated as would their cultural identities.

From the perspective of many Native Americans, the federal government’s relationship with them has been mostly one-sided. According the 1953 legislation, tribes would relinquish their sovereignty by leaving the reservations and assuming rights and responsibilities as American citizens. It's my life: Being 'mentally ill' does not make you incompetent, says Clare Allan. Contributors from the BBC's How Mad Are You? 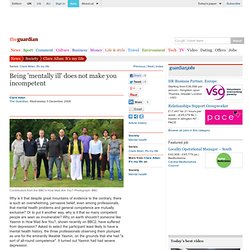 Photograph: BBC Why is it that despite great mountains of evidence to the contrary, there is such an overwhelming, pervasive belief, even among professionals, that mental health problems and general competence are mutually exclusive? Or to put it another way, why is it that so many competent people are seen as invulnerable? Why on earth shouldn't someone like Yasmin in How Mad Are You? , shown recently on BBC2, have suffered from depression? It was a highly emotional, revealing moment. How Mad Are You? "It should be easy", the voiceover told us. The History of Shock Therapy in Psychiatry. Renato M.E. 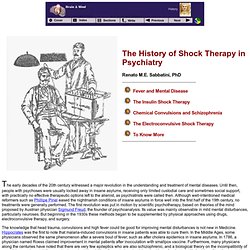 Sabbatini, PhD Fever and Mental Disease. Discuss: The Surprising History of the Lobotomy - Psych Central. Picture Book Report. He Made Things on the Ward Pretty Interesting “[...] 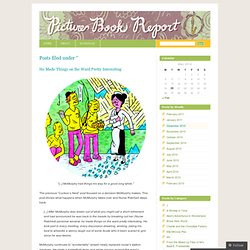 McMurphy had things his way for a good long while.” The previous “Cuckoo’s Nest” post focused on a decision McMurphy makes. This post shows what happens when McMurphy takes over and Nurse Ratched steps back. [...] McMurphy continues to “accidentally” smash newly replaced nurse’s station windows. Inspired by the other P.B.Reporters, I wanted to try hand painting this one. January 21, 2011 at 9:40 am PMurphy “Sorry, Ma’am” “That window glass was so spick and span I com-pletely forgot it was there.” Hi there! McMurphy is pushed over the edge when Nurse Ratched takes away the patients privilege to use the tub room as a place for them to play their card games.

“I’m sure sorry, ma’am,” he said. Sorry I couldn’t provide a more elaborate drawing for today but I wanted to post something since I missed last month’s post. Asch Conformity Experiment. Elevator Groupthink: A Psychology Experiment in Conformity, 1962. By Maria Popova What vintage Candid Camera can teach us about the cultural role of the global Occupy movement. 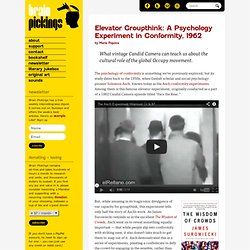 The psychology of conformity is something we’ve previously explored, but its study dates back to the 1950s, when Gestalt scholar and social psychology pioneer Solomon Asch, known today as the Asch conformity experiments. Among them is this famous elevator experiment, originally conducted as a part of a 1962 Candid Camera episode titled “Face the Rear.” But, while amusing in its tragicomic divulgence of our capacity for groupthink, this experiment tells only half the story of Asch’s work. As James Surowiecki reminds us in the excellent The Wisdom of Crowds, Asch went on to reveal something equally important — that while people slip into conformity with striking ease, it also doesn’t take much to get them to snap out of it. HT Not Exactly Rocket Science Donating = Loving Bringing you (ad-free) Brain Pickings takes hundreds of hours each month. Share on Tumblr. NY Times on Kesey's Death. Ken Kesey, the Pied Piper of the psychedelic era, who was best known as the author of the novel ''One Flew Over the Cuckoo's Nest,'' died yesterday in a hospital in Eugene, Ore., said his wife, Faye. 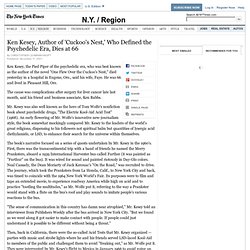 He was 66 and lived in Pleasant Hill, Ore. The cause was complications after surgery for liver cancer late last month, said his friend and business associate, Ken Babbs. Mr. Kesey was also well known as the hero of Tom Wolfe's nonfiction book about psychedelic drugs, ''The Electric Kool-Aid Acid Test'' (1968). An early flowering of Mr. The book's narrative focused on a series of quests undertaken by Mr. ''The sense of communication in this country has damn near atrophied,'' Mr. Kesey Interviews. One Flew Over The Cuckoo’s Nest. Here's an experiment for you, Shmoopers. 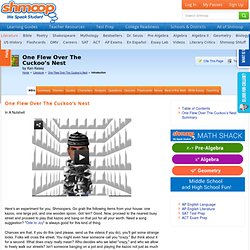 Go grab the following items from your house: one kazoo, one large pot, and one wooden spoon. Got 'em? Good. Now, proceed to the nearest busy street and proceed to play that kazoo and bang on that pot for all your worth.