Participation of Women in Politics. Empowerment of women in politics, governance, entrepreneurship-B.PAC. Women in Public Policy and Politics. CCTV Camera Installation at Police Stations- B.PAC. B.PAC objected to KERC about BESCOM’s tariff hike proposal- B.PAC. B.SAFE Constituency. B.SAFE Citizen Campaign. B.SAFE Heads Gender Sensitisation Of BMTC Staff. Regulatory Ecosystem in Bengaluru Mobility - Round Table-B.MOBILE. Over the last decade, there has been a phenomenal growth in the population of vehicles in Bengaluru. 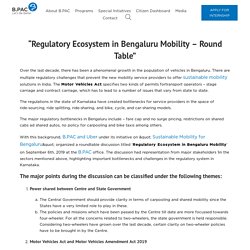 There are multiple regulatory challenges that prevent the new mobility service providers to offer sustainable mobility solutions in India. The Motor Vehicles Act specifies two kinds of permits fortransport operators – stage carriage and contract carriage, which has to lead to a number of issues that vary from state to state. The regulations in the state of Karnataka have created bottlenecks for service providers in the space of ride-sourcing, ride splitting, ride-sharing, and bike, cycle, and car-sharing models. The major regulatory bottlenecks in Bengaluru include – fare cap and no surge pricing, restrictions on shared cabs ad shared autos, no policy for carpooling and bike taxis among others. Participatory Democracy Fellowship Program ( PDFP) - B.PAC. About Fellowship Participatory Democracy Fellowship Program (PDFP) is an initiative of the Bangalore Political Action Committee (B.PAC) to bridge the gap between classroom learning and on-ground experience for public policy students. 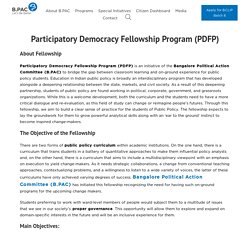 Education in Indian public policy is broadly an interdisciplinary program that has developed alongside a deepening relationship between the state, markets, and civil society. As a result of this deepening partnership, students of public policy are found working in political, corporate, government, and grassroots organizations. While this is a welcome development, both the curriculum and the students need to have a more critical dialogue and re-evaluation, as this field of study can change or reimagine people’s futures. B.SAFE Constituency Program. About B.SAFE CONSTITUENCY Our country has massive human capital but nearly half of these helping hands receive little or no help of their own. 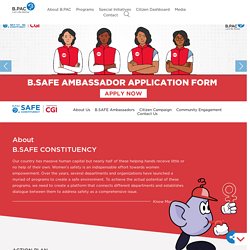 Women’s safety is an indispensable effort towards women empowerment. Over the years, several departments and organizations have launched a myriad of programs to create a safe environment. To achieve the actual potential of these programs, we need to create a platform that connects different departments and establishes dialogue between them to address safety as a comprehensive issue. The action plan for safer constituency is prepared by concerted efforts of audits, interviews of duty bearers, perception survey of users, focus group discussions and information obtained from various government departments through research and Right to Information Act. This document lays out steps that various departments must take to both make public places safer and enhance the perception of safety. 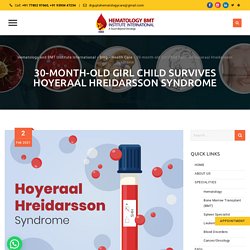 Bennett. Meera’s (name changed) sufferings had no end. Corporator Engagement Program-B.CLIP. To enhance the quality of life of citizens, promote and sustain good governance practices and policies for the economic competitiveness, social well-being, and inclusive growth of the city through strengthening political engagement, encouraging greater citizen participation and constant interaction with the bureaucracy, as defined in the B.PAC’s Agenda for Bengaluru. 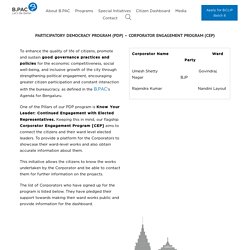 One of the Pillars of our PDP program is Know Your Leader: Continued Engagement with Elected Representatives. Keeping this in mind, our flagship Corporator Engagement Program [CEP] aims to connect the citizens and their ward level elected leaders. To provide a platform for the Corporators to showcase their ward-level works and also obtain accurate information about them. This initiative allows the citizens to know the works undertaken by the Corporator and be able to contact them for further information on the projects. The list of Corporators who have signed up for the program is listed below. B.SAFE Community Engagement. COVID Relief Response in Bengaluru during COVID-19 pandemic. The COVID-19 virus has proliferated across the globe causing large-scale destruction to mankind. 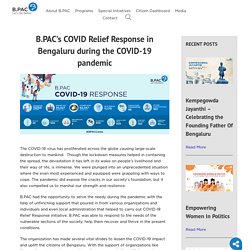 Though the lockdown measures have helped in containing the spread, the devastation it has left in its wake on people’s livelihood and their way of life is immense. For the past three to four months, the world, including India, has been hit by coronavirus. Economies across the world have fallen. What does democracy mean to a 16 year old? - B.PAC. Democracy to me essentially means power in the hands of the people, because we as citizens of our country have the right to elect our leaders and choose who represents us. 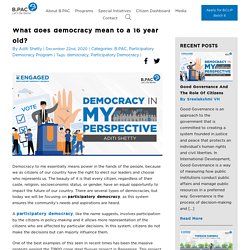 The beauty of it is that every citizen, regardless of their caste, religion, socioeconomic status, or gender, have an equal opportunity to impact the future of our country. There are several types of democracies, but today we will be focusing on participatory democracy, as this system ensures the community’s needs and aspirations are heard.

A participatory democracy, like the name suggests, involves participation by the citizens in policy-making and it allows more representation of the citizens who are affected by particular decisions. In this system, citizens do not make the decisions but can majorly influence them. Embracing democracy and its imperfections - B.PAC. Democracy is far from perfect. 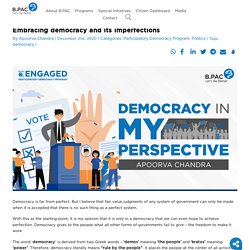 But I believe that fair value judgments of any system of government can only be made when it is accepted that there is no such thing as a perfect system. With this as the starting point, it is my opinion that it is only in a democracy that we can even hope to achieve perfection. IDEA OF GOOD GOVERNANCE AND CITIZEN ENGAGEMENT - B.PAC. In the last decade of the 20th century, the need for good governance has been an important and recurring theme in the literature dealing with human development – both research and popular. 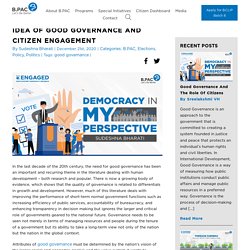 There is now a growing body of evidence, which shows that the quality of governance is related to differentials in growth and development. However, much of this literature deals with improving the performance of short-term normal government functions such as increasing efficiency of public services, accountability of bureaucracy, and enhancing transparency in decision making but ignores the larger and critical role of governments geared to the national future. Governance needs to be seen not merely in terms of managing resources and people during the tenure of a government but its ability to take a long-term view not only of the nation but the nation in the global context.

Good Governance And The Role Of Citizens - B.PAC. Good Governance is an approach to the government that is committed to creating a system founded in justice and peace that protects an individual’s human rights and civil liberties. 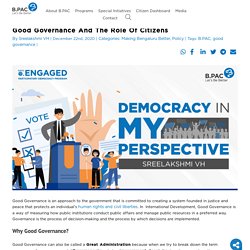 In International Development, Good Governance is a way of measuring how public institutions conduct public affairs and manage public resources in a preferred way. Governance is the process of decision-making and the process by which decisions are implemented. Functioning democracy - B.PAC. Democracy, the great experiment of the west. Not a perfect system, but the next best thing. For any functioning democracy, the four pillars that hold it up must gleam in the light of this new dawn.

Terrace Farming: Agriculture in the urban jungle - B.GREEN. If you live in a dense and populous city such as Bangalore, space comes at an absolute premium. Chances are that you might not have access to an expansive backyard for all your gardening needs. This is where terrace gardening comes into play. In a world where healthy eating habits, organic food, and environmental awareness are rapidly becoming more widespread, terrace farming can be an extremely worthwhile pursuit.

Before we get into how you can start your very own terrace garden, let us take a look at some of the benefits: A healthy source of vegetables: Terrace gardens are capable of producing herbs, tomatoes, potatoes, and much more. Tackle sexual harrasment cases. One of the big issues in India to tackle cases of sexual harassment of children have been poor compliance of the POCSO Act and poor functioning of the fast track / special courts to try these horrendous crimes.

Fast track courts were initially established by the Central Government to dispose of long-pending cases, especially session’s court cases, across a variety of subject matters using a grant from the 11th Finance Commission (2000-2005). Pursuant to the scheme for which the grant was sanctioned, a total of 1,734 such fast track courts were established across the country. The term of this grant came to an end in 2005 and was renewed by the 12th Finance Commission for the maintenance of 1,562 existing fast track courts for another 5 years, up to 2010. Active Citizen Participation in the electoral process, Bangalore. Introduction Bengaluru has entered an “electoral-hatrick year” which is a unique situation where for the next three years Bengaluru will witness elections at three levels i.e. Vidhan Sabha in 2018, Lok Sabha in 2019, and BBMP in 2020.

Participation of Women in Politics: A Case study of Karnataka State. B.PAC undertook a study to assess the participation of women in politics in the state of Karnataka. The study suggests that between 1957 to 2018 elections, the participation of women has increased from 4 % to 8 %, while the representation of women in the KLA has fallen from 7 % in 1957 to 4 % in 2018. The study is based on the analysis of secondary data available in the public domain supplemented by qualitative interviews with women and male political leaders. B.CLIP Leaders in Party Positions. Our flagship initiative, B.CLIP – B.PAC Civic Leadership Incubator Program has been grooming civic leaders for Namma Bengaluru for the past 7 years.

B.SAFE- Child Protection and Development Program in Bangalore. A Billion Eyes for Safer Bengaluru. B.PAC, in association with Bangalore City Police, launched ‘A Billon Eyes – For a Safer Bengaluru’ Campaign, to build awareness on Bystander Intervention. Research shows that Bystander intervention helps prevent harassment and increases the sense of safety among women.

The theme of ‘A Billion Eyes’ is based on the concept that ‘It Takes All of Us’. Often, men or women who intend to help find themselves helpless in such situations due to the lack of knowledge. The journey of Non-Kannadiga to Naanu Kannadiga. B.CLIP Leaders in Party Positions. Sustainability and Environmental Preservation. It is a common sight in any city in India, to be walking down a lane and finding a heap of garbage which generally doesn’t belong there. Waste management has been in the talks for as long as one can remember but was officially launched into a scheme in 2014 as Swachh Bharat Abhiyan. At this point, waste management has become a colloquial term and is used in everyday conversations by environmentalists as well as the common public alike. And yet, does one see the internalization of that term? Bangalore as a city, has been pioneering the waste management drive since 2006.