The 61 Best Teacher Memes On The Internet. Prankster Swaps Out Labels At Local Pet Store...Hilarious! 15 Cheesy Teacher Jokes That Crack Us Up. 52 Of The Most Common Myths and Misconceptions Debunked In One Infographic. Did you know that black belts do not indicate ninja-level mastery, adding only a sprinkle of salt to fresh water does not make it boil quicker, and that sharks do get cancer? 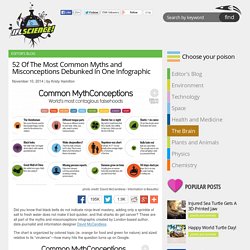 These are all part of the myths and misconceptions infographic created by London-based author, data-journalist and information designer David McCandless. The chart is organized by colored topic (ie. orange for food and green for nature) and sized relative to its “virulence”—how many hits the question turns up on Google. David McCandless / Information is Beautiful To see all eighty myths and misconceptions, check out the infographic mega-tome Knowledge is Beautiful by David McCandless. Read this next: Apparently, Burning NH4Cr2O7 With HgSCN Opens A Portal To Hell. WeAreTeachers — 12 Reasons Teachers Have the Best Job in the World.

Spurious Correlations. The Office Stare Machine. Some Humor From Science (19 Pics) Love, Teach: 16 Things You Can Do While Actively Monitoring during Standardized Testing (or the next time you’re crazy bored) I know I use a lot of superlatives, but administering standardized tests is pretty close to the worst. 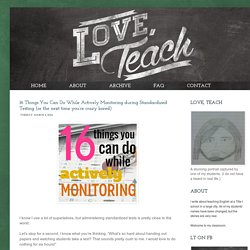 Let’s stop for a second. I know what you’re thinking. “What’s so hard about handing out papers and watching students take a test? That sounds pretty cush to me. I would love to do nothing for six hours!” Wrong-o, my friend. The type of “nothing” that you are thinking of probably involves a lot of things—reading a magazine or a book, checking your phone, looking around idly—but this is not the “doing nothing” of standardized test administration. No computer/phone/technology of any kind. No writing, drawing, doing crossword puzzles, or Sudoku. No lunges, jumping jacks, or anything that would distract students. No grading papers or getting caught up on work. No sitting for more than a few minutes. No standing in one place. No zoning out. The State would call this "actively monitoring. 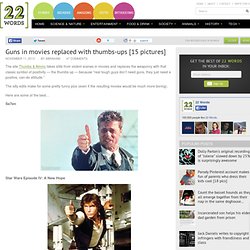 The silly edits make for some pretty funny pics (even if the resulting movies would be much more boring). Here are some of the best… Se7en Star Wars Episode IV: A New Hope Mission Impossible 3 Rambo Reservoir Dogs Die Hard Hellboy Robocop Django Unchained The Big Lebowski Star Trek Looper Scarface Pulp Fiction (via Taste of Cinema) And the Big Brain Behind It" 8 New and Necessary Punctuation Marks. 33 Teachers Who Got The Last Laugh. Certainty. The Difference. 6 Most Hilarious & Fun Science Websites. Are you still searching for the fun in science? Maybe you need to take a look at its other side, the less serious and factual one.

Let me tell you it exists, after all science is made by humans. Like anywhere else, you will find all sorts of characters among scientists. Think about this: everything humans have created is so complex and diverse because it reflects the minds behind it. Just think of relationships or laws. So let’s inspect the surprising, puzzling and fun side of science, the one you may not have expected or the one you never really took seriously.