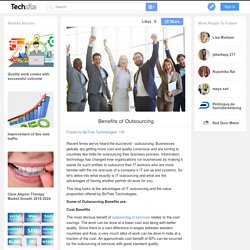 Businesses globally are getting more cost and quality conscious and are turning to countries like India for outsourcing their business process. Information technology has changed how organizations run businesses by making it easier for such entities to outsource their IT workers who are more familiar with the ins-and-outs of a company’s IT set-up and systems. So let’s delve into what exactly is IT outsourcing and what are the advantages of having another partner do work for you. This blog looks at the advantages of IT outsourcing and the value proposition offered by BoTree Technologies.

RPA - OCR Technologies & Types - BoTreeTechnologies. Securely Send Large Files for Free Using Ruby with Firefox Send. Popular SaaS Solutions Built with Ruby on Rails Framework. Ruby on Rails is a popular web development framework that has been used by developers all over the world. 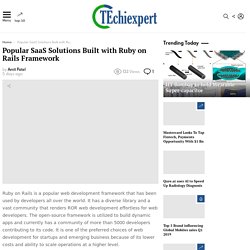 It has a diverse library and a vast community that renders ROR web development effortless for web developers. The open-source framework is utilized to build dynamic apps and currently has a community of more than 5000 developers contributing to its code. It is one of the preferred choices of web development for startups and emerging business because of its lower costs and ability to scale operations at a higher level. Action Mailbox - Unboxing. Improve React App Performance by Lazy Loading ReactJS Components! Equipping your Organization with Robotic Process Automation Technology. Top Libraries to use with Advanced React JS Applications! Know Python: Is it a Programming Language or a Scripting Language? Python, the object-oriented language, has recently gained wide popularity due to its diverse applications in machine learning and artificial intelligence. 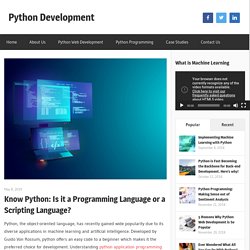 But with time, the responsibilities need to be divided. The compiled languages came to be known as programming languages and the ones that utilized an interpreter were known as scripting languages. Case Studies : BLISS. BLISS stands for The Breitenbush Living Information Sharing System, and was envisioned as being a central repository and management system for all aspects of guest stays, including reservations for Personal Retreats, Events, Day Use and Massages, cabin cleaning and maintenance, guest satisfaction and feedback, and all financial transactions of the business. 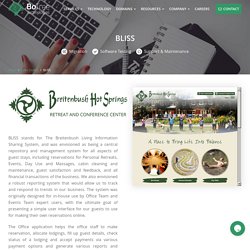 We also envisioned a robust reporting system that would allow us to track and respond to trends in our business. The system was originally designed for in-house use by Office Team and Events Team expert users, with the ultimate goal of presenting a simple user interface for our guests to use for making their own reservations online. The Office application helps the office staff to make reservation, allocate lodgings, fill up guest details, check status of a lodging and accept payments via various payment options and generate various reports and display analytics. 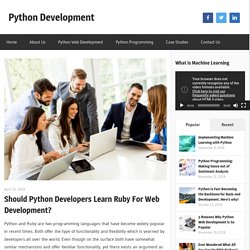 Developers interested in data analytics and data science have an obvious inclination towards python development. Ruby is more of a language that is the perfect resource for startups as the development doesn’t involve high costs and there’s a lot of learning to be done.Ruby is nearly similar to python and involves nearly identical decisions making it easier to learn for developers who already have experience with python. React Native Vs. Ionic? Which Mobile Framework Holds The Future? - BoTree Technologies. Here’s a comparison between React App Development and Ionic Framework DevelopmentMobile app development is booming at exponential rate. 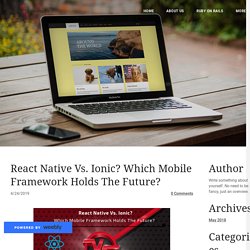 However, the app development process is not easy and one might need separate teams for iOS and Android platforms. Facebook introduced React Native for developers to easily create native apps. Ionic is another framework, which was developed to escalate & simplify mobile app development process. So React Native or Ionic? Ruby on Rails, Python and Mobile App Development Consulting Company: BoTree Technologies: Beyond Just Costs, Outsourcing Puts Your Nose Ahead in The Race to The Top!

Deploy New Feature on Production in Controlled Way - Rollout Gem. Learning Python In One Month – BoTreeTechnologies. What is an Ideal Checklist to Learn Python in 30 days? 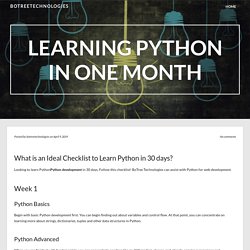 Looking to learn PythonPython development in 30 days. Follow this checklist! BoTree Technologies can assist with Python for web development. RPA - Future of Manual Testing - Where Are The IT Engineers Today Who Started 25... - BoTree Quora Blog - Quora. IT industry is growing at a rapid pace and people are eager to join it. 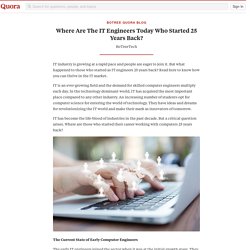 But what happened to those who started as IT engineers 25 years back? Read here to know how you can thrive in the IT market. IT is an ever-growing field and the demand for skilled computer engineers multiply each day. In the technology dominant world, IT has acquired the most important place compared to any other industry. The Django Framework and Its Applications - Python Development. Django is an open-source python web framework which is used for accelerated development, efficient, conceivable, neat design and website security. 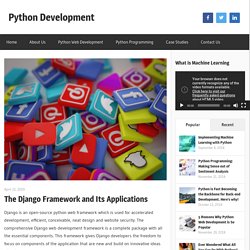 The comprehensive Django web development framework is a complete package with all the essential components. This framework gives Django developers the freedom to focus on components of the application that are new and build on innovative ideas ahead. There are various technologies in the market today that have used the Django framework such as Disqus, Instagram, Spotify, YouTube, The Washington Post, Dropbox, Bitbucket, Eventbrite, Mozilla, Prezi and many more. Pagy - A New Pagination Gem in the Realm of Rails World. Finding the Right Outsourcing Service Company for IT Tasks in India. How to build a chatbot in React Native using react-native-chatbot? 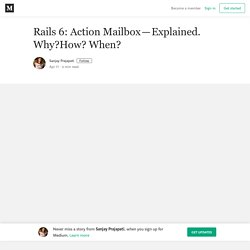 New methods for ActiveRecord, ActionText, Action Mailbox are some of them. We are going to talk about Action Mailbox today. Becoming an Expert in Python Development: The Basics & Tools. Which is More Scalable: Laravel, Rails or Django? - BoTree Technologies - Pennsylvania, PA. There are three major application frameworks: Laravel, Rails, and Django. All of them are full-stack frameworks containing all the vital features to build a web application. Though, each has its own unique characteristics, structure and programming language. Laravel Laravel is a web-based framework created in PHP. A Guide for “Web Application Developer’s Manual Testing” Why Python Development is Preferred over other Programming Languages? The world of software development is jam-packed with programming languages that enable developers to build dynamic web applications.

From the historical C & C# to the latest Google Go, there have been a plethora of languages that have been separately advocated by developers all over the world. Yet, as is the case with every collective, some are better than the rest. Ruby, JavaScript, PHP, Go, Swift, and python for web development are preferred by developers, leaving little room for countless other programming languages that struggle to compete with them. But which language ranks as the hot favorite of engineers in the software world? Bringing Ruby Metaprogramming Closer to Ruby on Rails Developers.

It offers high-level programming for small and large applications and has fast become the favored platform for developers. Here are the main areas where python is used. 1. The Rising Popularity of ReactJS in the IT Industry. Integrating Google Cloud Vision API with Ruby for Image Object Detection. Top Expertise Requirement For A Full Stack Developer. Outlining Processes with Outsourcing Service Company can lead to Outstanding Results. Yourstory. Extracting text from image using Google Cloud vision OCR with Ruby. The ultimate guide to critical e-commerce KPI metrics. Why have both Amazon and eCommerce, and why not just one? How fashion labels are riding the retail e-commerce trends?

Difference Between Git and GitHub - BoTree Quora Blog - Quora. Let’s first see what Git is! Git is a distributed version control system (DVCS) used during software development. It enhances speed, takes care of data integrity, and support for non-linear workflows. Know About Intra-business Ecommerce. Cloud Computing: Speed Up your Digital Transformation Process. The Benefits of Robotic Process Automation in the Service Industry. Stock Management for Ecommerce Business. Simplifying reporting and analytics with RPA technology. BoTree Technologies — Why Do Many Startups Use Ruby on Rails - Its... Tips for Writing Pythonic Code - Python Development.

In case you’re new to Programming, and python programming specifically, you may have heard the term Pythonic being raised at tech gatherings, meetups and even at your own office. You may have also asked why the term is used and whether they’re simply looking at composing Python code. Here we will comprehend what the term Pythonic means and why you ought to be keen on figuring out how to not simply compose Python code, rather compose Pythonic code.

Building a Startup Business Plan for Your Mobile App Development.