Scientists found the origins of the Ebola outbreak — by tracking its mutations. One of the big mysteries in the Ebola outbreak in West Africa is where the virus came from in the first place — and whether it's changed in any significant ways. 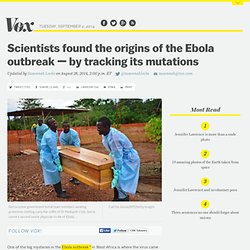 These unanswered questions could be making it more difficult to diagnose the disease and find treatments. A new analysis could help show if Ebola is changing over time Now scientists are starting to get some answers. In a new paper in Science, researchers reveal that they have sequenced the genomes of Ebola from 78 patients in Sierra Leone who contracted the disease in May and June. Those sequences revealed some 300 mutations specific to this outbreak. Ebola outbreak: Five co-authors of latest study killed by virus before their research was published - Africa. The study, published on Thursday, discovered the virus has mutated many times during the outbreak in West Africa, making establishing a treatment more difficult. 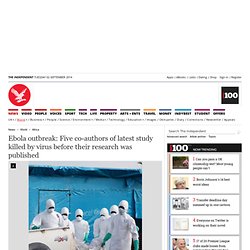 Mbalu Fonnie, Alex Moigboi, Alice Kovoma, Mohamed Fullah and Sheik Umar Khan worked with lead researchers at Harvard University to examine the current outbreak. Science Mag said all five were experienced members of the Kenema Government Hospital’s (KGH) Lassa fever team. Lassa fever infections have similar symptoms to Ebola. Their work sequenced the virus genomes from 78 patients and traced the outbreak in Sierra Leone to a funeral of a healer, which a pregnant Kenema Government Hospital Ebola patient and other women who were also infected had attended.

Loading gallery. Ebola virus: Liberia, Sierra Leone, Guinea, Nigeria, and Senegal’s grisly reality as virus hits West Africa. When it comes to surviving one of the world's deadliest diseases, there are few options and no guarantees. 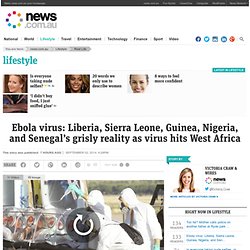 Australian spy agency ASIO says it needs better tools to rein in an expanding terrorism threat. A special church service is held for James Foley, the American journalist killed by Islamic State militants in Iraq. Vanessa Johnston reports. Sports journalist Erin Molan is bombarded with inappropriate and sexist questions during her weekly sports chat with Kyle and Jackie O on Kiis FM. Courtesy: Kiis FM IS militants have released a video purportedly showing the beheading of US journalist James Foley.

The genius comedian and Academy award-winning actor has died aged 63. Animals Australia - footage of a chicken farm Watch this behind the scenes video for the hit television show 'Arrow' and see cast members preparing for the biggest fight scene ever in television history. News.com.au's Debra Killalea sits down with adult film superstar, James Deen. An empty flight bound for Monrovia. Will Ebola End In Port Harcourt? By Arnold Obomanu. Why would a practicing medical doctor hide an Ebola case? 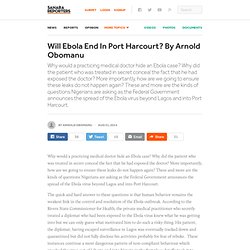 Why did the patient who was treated in secret conceal the fact that he had exposed the doctor? More importantly, how are we going to ensure these leaks do not happen again? These and more are the kinds of questions Nigerians are asking as the Federal Government announces the spread of the Ebola virus beyond Lagos and into Port Harcourt. The quick and hard answer to these questions is that human behavior remains the weakest link in the control and resolution of the Ebola outbreak. According to the Rivers State Commissioner for Health, the private medical practitioner who secretly treated a diplomat who had been exposed to the Ebola virus knew what he was getting into but we can only guess what motivated him to do such a risky thing. Another Liberian diagnosed with Ebola virus in Lagos. Ebolavirus. This article is about a biological genus. 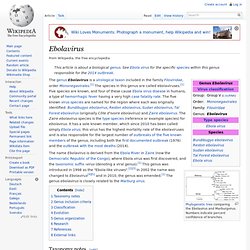 See Ebola virus for the specific species within this genus responsible for the 2014 outbreak. Phylogenetic tree comparing the Ebolavirus and Marburgvirus. Numbers indicate percent confidence of branches. The genus Ebolavirus is a virological taxon included in the family Filoviridae, order Mononegavirales.[1] The species in this genus are called ebolaviruses.[1] Five species are known, and four of these cause Ebola virus disease in humans, a type of hemorrhagic fever having a very high case fatality rate. The five known virus species are named for the region where each was originally identified: Bundibugyo ebolavirus, Reston ebolavirus, Sudan ebolavirus, Taï Forest ebolavirus (originally Côte d'Ivoire ebolavirus) and Zaire ebolavirus. 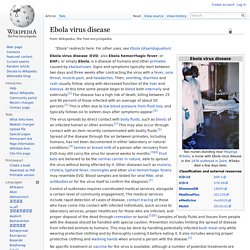 Signs and symptoms typically start between two days and three weeks after contracting the virus with a fever, sore throat, muscle pain, and headaches. Then, vomiting, diarrhea and rash usually follow, along with decreased function of the liver and kidneys. At this time some people begin to bleed both internally and externally.[1] The disease has a high risk of death, killing between 25 and 90 percent of those infected with an average of about 50 percent.[1] This is often due to low blood pressure from fluid loss, and typically follows six to sixteen days after symptoms appear.[2] Control of outbreaks requires coordinated medical services, alongside a certain level of community engagement. No specific treatment or vaccine for the virus is available, although a number of potential treatments are being studied.