Are you a beer boffin? Take the quiz to find out. Strange Brews: 4 Of The Weirdest Beers London Ever Drank. It's nothing out of the ordinary in today's London to order a glass of earl grey IPA, an imperial pumpkin stout or a wine-barrel aged sour beer. 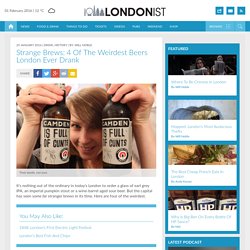 But the capital has seen some far stranger brews in its time. The death and life of the great British pub. The Murphy family, John, Mary and their adult son Dave, were preparing to spend a 33rd Christmas as landlords of the Golden Lion pub in Camden, north London when they heard the rumours. 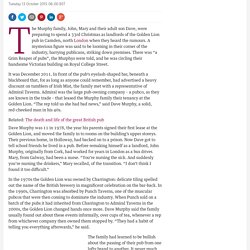 A mysterious figure was said to be looming in their corner of the industry, harrying publicans, striking down premises. There was “a Grim Reaper of pubs”, the Murphys were told, and he was circling their handsome Victorian building on Royal College Street. It was December 2011. Beer-world-map-3000-full-web.jpg (JPEG Image, 3750 × 2455 pixels) - Scaled (27%) Community fixers? The mighty rise of the micropub. British pubs are closing at a rate of 31 a week, according to figures released by the Campaign for Real Ale (CAMRA) in August, but a new type of drinking establishment is emerging: the micropub. 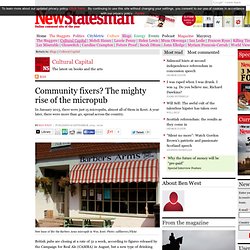 In January 2013, there were just 15 micropubs, almost all of them in Kent. A year later, there were more than 40, spread across the country. The Just Reproach in Deal, Kent, was Britain’s eighth micropub. Its walls are decorated with dried hops, pub signs and other paraphernalia – including several mobile phones, nailed up as a stern warning to anyone considering using one in the room. The six chunky wooden tables have kegs of beer stored underneath and can seat some 18 people. The return of the dimpled pint glass. A History Of London In Five Beers. Not these five beers, though. 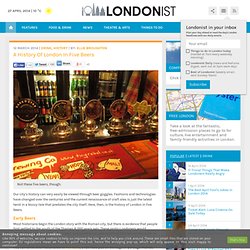 Our city’s history can very easily be viewed through beer goggles. Fashions and technologies have changed over the centuries and the current renaissance of craft ales is just the latest twist in a boozy tale that predates the city itself. Here, then, is the history of London in five beers. Early Beers Most historians begin the London story with the Roman city, but there is evidence that people first settled to the south of the Thames 8,000 years ago.

Mead By medieval times, Londoners had upgraded from ‘fermented anything’ to a fermented honey drink: mead. There is still at least one company that brews mead in London: Gosnells. You can drink it in Oskar’s Bar at Dabbous on Whitfield Street, or Reverend JW Simpson on Goodge Street. Beer: The women taking over the world of brewing. 23 January 2014Last updated at 18:41 ET By Denise Winterman BBC News Magazine Inside Sara Barton's brewery The number of professional women brewers is on the rise in the UK and they are becoming increasingly influential, according to leading industry figures. 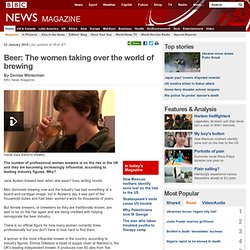 Why? Jane Austen brewed beer when she wasn't busy writing novels. Men dominate brewing now and the industry has had something of a beard-and-cardigan image, but in Austen's day it was part of her household duties and had been women's work for thousands of years. But female brewers, or brewsters as they are traditionally known, are said to be on the rise again and are being credited with helping reinvigorate the beer industry. There is no official figure for how many women currently brew professionally but you don't have to look hard to find them.

Crap pubs: 10 things that bad boozers get wrong. Beer History - Beer Genie. All for the sake of a pint In the Middle East, hunter-gatherers learn how to make beer from the wild wheat and barley they find growing in the foothills. 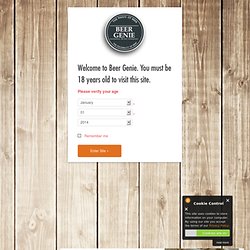 They quickly become tired of trekking up into the hills every time they want to make a pint, and start growing the grain for their beer down in the valleys – thus, according to some historians, inventing farming and civilisation, all for the sake of a drink. Sisters were brewing it for themselves (and the men too) As Mesopotamian man is busy hunting, gathering, fighting each other, pottering about etc the role of brewing is left to the ladies. In fact, blokes aren’t allowed to brew or keep taverns. Dodgy pint? Various water recipes - German brewing and more. It is not often that I come across actual brewing water analysis data in the literature but the Markus Hermann's dissertation gave an insight into the water that is used for brewing studies at the Weihenstephan brewing school in Freising, Germany. 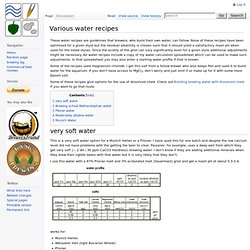 While it makes a great water for Weissbier, in fact the dissertation was about brewing Weissbier, it is not necessarily the water that the Weihenstephan brewery uses. with unsdissolved chalk: with chalk dissolved with CO2: water_weihenstephan_dissolved_chalk.xls works well for: 7 questions on binge-drinking history. Has Britain fallen out of love with lager? 2 March 2012Last updated at 11:11 By Jon Kelly BBC News Magazine Once synonymous with the British night out, sales of lager have slumped. 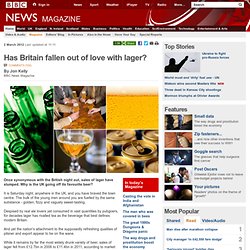 Why is the UK going off its favourite beer? It is Saturday night, anywhere in the UK, and you have braved the town centre. The bulk of the young men around you are fuelled by the same substance - golden, fizzy and vaguely sweet-tasting. Despised by real ale lovers yet consumed in vast quantities by pubgoers, for decades lager has rivalled tea as the beverage that best defines modern Britain. And yet the nation's attachment to the supposedly refreshing qualities of pilsner and export appear to be on the wane. While it remains by far the most widely drunk variety of beer, sales of lager fell from £12.7bn in 2006 to £11.4bn in 2011, according to market researchers Mintel - a decline that appears even sharper when a succession of above-average price increases is taken into account. Continue reading the main story All about lager.

Four IPA myths that need to be stamped out for #IPAday. There’s an amazing amount of inaccurate, made-up rubbish that has been written about the history and origins of IPA, or India Pale Ale. 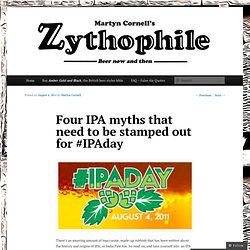 So read on, and turn yourself into an IPA mythbuster for #IPA day: Myth 1: “IPA was invented by a brewer called George Hodgson from Bow, in East London.” Realale.com. Compiled by the staff of Realale.com In the Beginning In Britain alone, there is evidence of brewing taking place from about 6000 years ago. 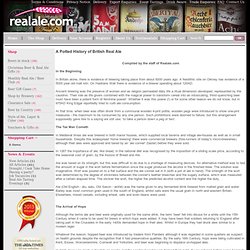 A Neolithic site on Orkney has evidence of a 5000 year old malt kiln. On Hadrians Wall there is evidence of a brewer operating about 120AD. Portal:Beer. BeerAdvocate - Respect Beer. Beer: The Midwife of Civilization. Every work dealing with the history of beer, it seems, starts out talking blithely about the Sumerians of ancient Mesopotamia as the first brewers, the inventors of beer, some eight to ten thousand years ago. However, what is usually lacking from of the published histories of beer is a meaningful treatise of the most obvious question: Why in Mesopotamia? Why at that point in time? And what, if anything, does it mean for us today?

Water. Malt. Hops. Beer Bloggers Unite - Making noise in the blogosphere with beer. Pencil and Spoon. How Beer Works" All you need to know about beer. Beer making by Tom Cannavan and Tom Stevenson Beer is made by adding water to a grain like barley or wheat. The grain is malted (allowed to germinate and then heated or roasted) and the brew is invariably flavoured with hops. Hops are the flowers of a climbing vine that contain compounds and acids that impart flavours and aromas to beer. Beer: how much would you pay? How much is too much for a pint of beer? Photograph: Getty I have a friend who won't pay more than £3 for a pint or £10 for a haircut. While the measures announced yesterday to put a minimum price on alcohol are aimed at curbing binge drinking and shouldn't affect the average beer drinker, last week's news that the average price of a pint in the UK has passed £3 will hit him hard.

The news gets worse: after the VAT increase earlier in the month, Britain's largest breweries have warned it's likely there will be a further 5-10p added to the cost of a pint in February thanks to rising raw material prices and increasing brewery overheads.

Beer Types. English Beer,real ale, list of english beer, english beers list. US craft beer: How it inspired British brewers. 11 April 2013Last updated at 19:18 ET By Jon Kelly BBC News Magazine, Washington DC How Brooklyn's breweries came back to life. The BBC's Matt Danzico reports Once widely mocked, US beer is now popular globally with hipsters and connoisseurs alike. Why is the world buying in to the American brewing revolution? Not so very long ago, American beer was a joke. To international tastebuds, it meant bottled lagers like Budweiser, Miller or Coors - commonly regarded by self-respecting drinkers as bland, corporate and lacking in credibility.

Fancy a pint of bacon beer? "The inspiration lies somewhere between the need to explore and wanting to entertain," explains Stuart Howe, the head brewer at Sharp's Brewery, who is creating 52 unique small batch beers this year and chronicling them on his blog. "The most important part of tasting is the undertaken by your brain. Unusual ingredients ensure that the brain is excited, which means it's more receptive to what's going on in your olfactory equipment. " But he warns: "None of the beers are going to be average! " Some of the beers are relatively normal: a Chilli IPA; a hop-free ale with yarrow, turmeric, bay and lemon balm; Shellfish Stout, brewed with oysters, cockles and mussels (oyster stout is a traditional style, many of them brewed with actual molluscs); a beer brewed with seawater; a Barley Tikka Vindaloo which includes chilli, ginger, coriander, cumin, cardamom and fennel; and one with added apple juice and crushed blackcurrants to recreate the perennial student favourite: Snakebite and Black.

Mark Dredge. Beer: drinking in the seasons. The British Summer of Beer - Inside Beer: Beer News, Beer Reviews and Beer Tasting Events. With The Queen’s Diamond Jubilee to celebrate and the Olympic Games taking place in Britain for the first time since 1948, it’s going to be quite a summer in the UK. Visitors to these shores will have plenty to keep them entertained, even if the British weather lives down to its usual expectations.