A Look Back: 1972 Munich Games. The 1972 Summer Olympics in Munich, Germany, were known as the "Games of Peace and Joy," but they turned into a high-stakes game of terror when 11 Israeli athletes were taken hostage by Palestinian terrorists. 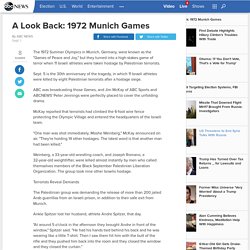 Sept. 5 is the 30th anniversary of the tragedy, in which 11 Israeli athletes were killed by eight Palestinian terrorists after a hostage siege. ABC was broadcasting those Games, and Jim McKay of ABC Sports and ABCNEWS' Peter Jennings were perfectly placed to cover the unfolding drama. Moscow Olympic Games 1980. The 1980 Moscow Olympics are perhaps most famous for the US-led boycott that saw only 80 out of 147 nations compete, the lowest number since the 1956 Melbourne Games. 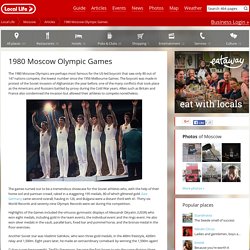 The boycott was made in protest of the Soviet invasion of Afghanistan the year before, one of the many conflicts that took place as the Americans and Russians battled by proxy during the Cold War years. Allies such as Britain and France also condemned the invasion but allowed their athletes to compete nonetheless. The games turned out to be a tremendous showcase for the Soviet athletes who, with the help of their home soil and partisan crowd, raked in a staggering 195 medals, 80 of which glittered gold. East Germany came second overall, hauling in 126, and Bulgaria were a distant third with 41. 1976: African countries boycott Olympics. 1976: African countries boycott Olympics The opening ceremony of the 21st Olympic Games in Montreal has been marred by the withdrawal of 25 African countries. 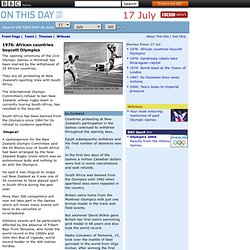 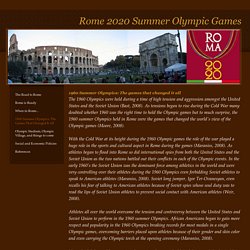 As tensions began to rise during the Cold War many doubted whether 1960 was the right time to hold the Olympic games but to much surprise, the 1960 summer Olympics held in Rome were the games that changed the world's view of the Olympic games (Moore, 2008). Carter announces Olympic boycott - Mar 21, 1980. Also on this day Lead Story On this day in 1871, journalist Henry Morton Stanley begins his famous search through Africa for the missing British explorer Dr. 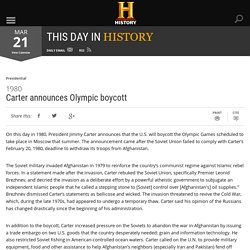 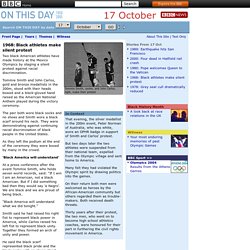 Tommie Smith and John Carlos, gold and bronze medallists in the 200m, stood with their heads bowed and a black-gloved hand raised as the American National Anthem played during the victory ceremony.