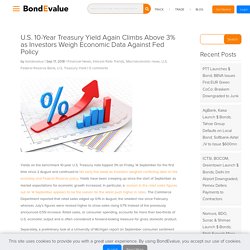 Treasury note topped 3% on Friday, 14 September for the first time since 2 August and continued to fall early this week as investors weighed conflicting data on the economy and Federal Reserve policy. Yields have been creeping up since the start of September as market expectations for economic growth increased. In particular, a revision in the retail sales figures out on 14 September appears to be the reason for the latest push higher in rates. The Commerce Department reported that retail sales edged up 0.1% in August, the smallest rise since February whereas July’s figures were revised higher to show sales rising 0.7% instead of the previously announced 0.5% increase. Retail sales, or consumer spending, accounts for more than two-thirds of U.S. economic output and is often considered a forward-looking measure for gross domestic product. Callable Bonds - BondEvalue. Bond Investors Take Flight to Safety Amid Trade War Tensions. The month of May was characterized by heightened trade tensions between US and China, as both superpowers failed to arrive at an agreement during trade talks held in Washington. 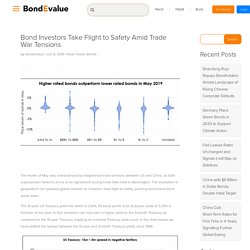 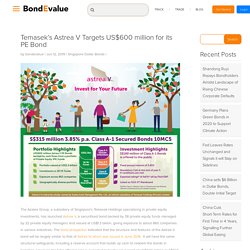 The bond prospectus indicated that the structure and features of the Astrea V bond will be largely similar to that of Astrea IV which was issued in June 2018. It will have the same structural safeguards, including a reserve account that builds up cash to redeem the bonds in tranches. However, the total offering size is expected to be the equivalent of US$600 million or S$827 million, on the back of orders of over US$4.3 billion across 3 tranches, as compared to Astrea IV’s US$500 million equivalent offering size. Class A-1 (rated A+/A by S&P/Fitch), the least risky tranche, will be S$315 million in size. Renewed Trade Tensions Trigger Risk-Off in Bonds - BondEvalue. Renewed trade tensions coupled with neutral commentary from the Fed Chair, after the FOMC cut interest rates by 25 basis points, triggered a move towards safer assets globally in the early days of August. 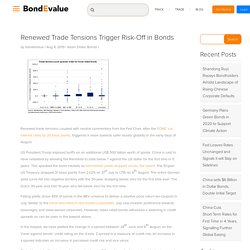 US President Trump imposed tariffs on an additional US$ 300 billion worth of goods. China is said to have retaliated by allowing the Renminbi to slide below 7 against the US dollar for the first time in 11 years. This spooked the bond markets as benchmark yields dropped across the board. The 10-year US Treasury dropped 31 basis points from 2.02% on 31st July to 1.71% on 6th August.

US Ultra-Long Treasury Bonds Likely to Meet Resistance - BondEvalue. The U.S. government’s most recent re-look at plans to issue treasuries beyond 30-years will likely not only encounter resistance from the Treasury Borrowing Advisory Committee but also risk unsettling markets. 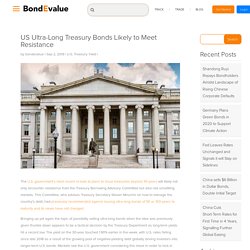 Flight to Quality Continues for Bond Investors - BondEvalue. Bond investors continued to move towards safety and quality amid negative sentiment world over. 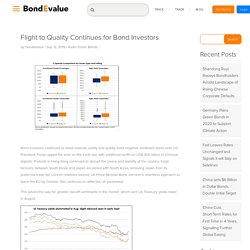 US President Trump upped the ante on the trade war with additional tariffs on US$ 300 billion in Chinese imports. Protests in Hong Kong continued to disrupt the peace and stability of the country; trade tensions between South Korea and Japan escalated with South Korea removing Japan from its preferred trade list; US-Iran relations soured; UK Prime Minister Boris Johnson’s relentless approach to leave the EU by October 31st continues to rattle the UK parliament. Hong Kong’s Rating Outlook by Moody’s Turns Negative - BondEvalue. Hong Kong’s rating outlook has been downgraded by Moody’s to “negative” from “stable” as a result of the weakening of the Special Administrative Region’s (SAR’s) institutions amid ongoing protests in the city. 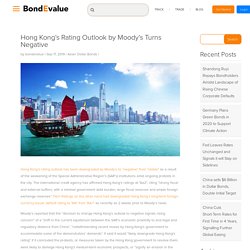 The international credit agency has affirmed Hong Kong’s ratings at “Aa2”, citing “strong fiscal and external buffers, with a minimal government debt burden, large fiscal reserves and ample foreign exchange reserves”. HY Bonds Outperform in Sept Amid Record 9M19 Issuance - BondEvalue. The month of September was mixed for bond investors with 41% of bonds in the BEV universe having a positive price return (ex-coupon), while 59% delivered a negative price return. 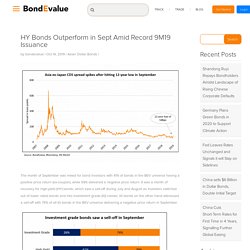 A similar trend was seen from the Markit iTraxx Asia ex-Japan CDX Index, which represents CDS spreads for investment grade bonds from the Asia ex-Japan region. The index fell to a 12-year low of 54bps, a level last seen in November 2007 (pre-financial crisis), on 19th September before climbing ~24bps to close at 78bps on 10th October. BondEvalue Unveils BondbloX – World’s First Blockchain-Based Bond Exchange. Press Release4 November 2019 Platform to launch via the Monetary Authority of Singapore’s Sandbox ExpressBondEvalue to make bonds accessible by reducing denominations to US$1,000 Singapore, 4 November 2019 – Singapore based BondEvalue today announced that it has been approved to enter the Monetary Authority of Singapore’s (MAS) Sandbox Express to launch a blockchain-based bond exchange. 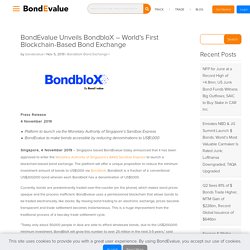 The platform will offer a unique proposition to reduce the minimum investment amount of bonds to US$1,000 via BondbloX. BondbloX is a fraction of a conventional US$200,000 bond wherein each BondbloX has a denomination of US$1,000. Where Can Bond Investors Find Bond Prices? - BondEvalue. Before we get into details about where investors can find bond prices, it is important to understand how bonds are traded and how the trading process is different from stocks. 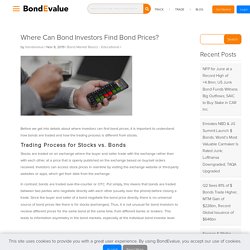 Trading Process for Stocks vs. Bonds Stocks are traded on an exchange where the buyer and seller trade with the exchange rather than with each other, at a price that is openly published on the exchange based on buy/sell orders received. State-Backed Chinese Chipmaker Tsinghua Unigroup’s Bonds Selloff, Highlighting Investor Concerns. Tsinghua Unigroup Co., one of China’s most strategically important technology companies, has seen the price of its dollar-denominated bonds sink as investors expressed fears over the chipmaker’s financial health. Its Hong Kong-traded $750 million bonds due in 2023 plunged to as low as 75 cents on the dollar earlier this month, before recovering 0.8 cents in the morning of the next trading day. The selloff was a result of concerns about Tshinghua Unigroup’s rapid buildup in debt in recent years and its ability to repay its bonds, and highlighted investors’ doubts over the strength of state support it would enjoy if its bonds were to default.

This is despite the state-owned company being among a handful of chipmakers with central government backing, having spearheaded China’s developing microchip industry and is being tasked with helping President Xi Jinping achieve his goal of challenging the U.S.’s global dominance in technology. China Cuts Short-Term Rates for First Time in 4 Years, Signalling Further Global Easing - BondEvalue. The People’s Bank of China (PBOC) lowered one of its key interest rates for the first time since 2015, signaling further easing across the globe. China’s central bank cut its seven-day reverse repurchase rate to 2.50% from 2.55%, bringing a spark of optimism to China’s bond market. Its benchmark 10-year treasury futures for December delivery gained more than 0.4% after the news. This unexpected move is the first such action the PBOC has made in more than 4 years and a hint to markets that policymakers stand ready to prop up slowing growth.

Fed Leaves Rates Unchanged and Signals it will Stay on Sidelines - BondEvalue. The US Federal Reserve left the fed funds rate range unchanged earlier this week at 1.50% to 1.75%, indicating that it intends to remain sidelined for the moment. Both comments made by Fed Chairman Jerome Powell and the Fed statement confirmed this as the central bank’s stance going forward unless there is a change in the outlook for the economy or inflation. Despite Chairman Powell saying that the Fed does not respond to headlines on trade developments, economists believe that with the trade tariff dateline looming on December 15, outcomes on trade could change the Fed’s position especially if it alters economic outlook.

He also expressed that the Fed needs to see a move in inflation – which currently is at a level stubbornly below the Fed’s target – that is significant and persistent before it raises interest rates again. Shandong Ruyi Repays Bondholders Amidst Landscape of Rising Chinese Corporate Defaults - BondEvalue. Shandong Ruyi Techonology Group unexpectedly repaid bondholders on the maturity of its $345 million dollar bonds that came due on December 19. This comes against a backdrop of investor concerns over rising corporate bond defaults in China. U.S.Treasury Yields Again Climbs Against Fed Policy. Bond Yields – Everything You Need to Know. A bond’s yield or return is one of the key things that investors assess when evaluating the quality of a bond investment.

However, there are many ways in which bond yields are expressed, making it difficult for an investor to understand and compare the target returns on different types of bonds. The Different Types of Bond Yields A. Nominal Yield. Get Complete Knowledge Of High Yield Bonds For Better Returns. Egypt, Mongolia, Argentina lead the Market Sovereign Bonds. As a result of investors seeking higher yields, sub-investment grade bonds from emerging market sovereigns such as Nigeria have enjoyed stellar performance this year.

The Wall Street Journal reports that BoA Merrill Lynch’s ‘BB’ rated and lower sovereign bond index achieved a 10.2% year-to-date return as compared to U.S. corporate non-investment grade bonds that returned just 7.3%. In particular, some of the best performing bonds are those issued by countries that were until recently struggling financially. According to BondEvalue’s pricing data, these sovereign bonds issued this year have since inception returned yields in the double digits, such as Egypt’s 8.5% bonds due 2047 that have risen 18.3%, El Salvador’s 8.625% bonds that have risen 17.9% and Nigeria’s 7.875% bonds that have returned 14.6%. Even Argentina, who has had a history of defaults, returned 15.4% and 14.8% respectively on its 9 and 29-year bonds issued in April this year.

We ought to make them as we all eventually toil hard to make a career which can fetch us with financial stability. We study, we learn and ultimately we tend to apply our learning in our work area. Money is the basic requirement of life. However, it is not the availability of finances that matters. Another very important thing that matters is the management of finances. Merely earning and saving money isn’t what our lives demands from us. 1) The platform/person who provides bond offers and binds the receiver with some principle amount 2) The receiver takes the principle amount and is bound to return the amount with interest after a span of respective time.

Binding takes place both the ways. With Bond E Value, you do not have to worry about anything. Bond Prices live checking. High yield bond vs. investment grade bonds – Stunttag. High yield bonds and investment grade bonds are the two terms that confuse many people who are starting their journey as an investor. These words are not similar, but they tend to confuse the listener as they function inversely to each other. In this post, we will elaborate both of these terms along with their advantages and disadvantages. Advantages and disadvantages of raising the debt by an issue of Bonds – Perunity. Many companies issue bonds to raise funds to support their operations. Some companies need finance to expand their business operations while others want to diversify it. Companies also issue bonds when they are facing financial troubles to fund their present operations. Any reason can cause a new bond issue. However, selling bonds to raise money is still considered a bad move by many financial analysts.

Strike Profitable Deals in Bonds with the help of an Experienced Platform - Jobeth.