Forefoot Running. Youtube. Runyourbq. The Principle of Progression: How to Consistently Get Faster. A lot of runners are realizing that mainstream advice is leaving them injured, frustrated, and slow: “I booked a sports physio session. 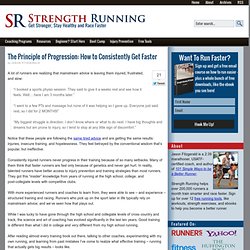 They said to give it a weeks rest and see how it feels. Well….here I am 3 months later.” “I went to a few PTs and massage but none of it was helping so I gave up. Everyone just said rest, so I did for 2 MONTHS!” Notice that these people are following the same tired advice and are getting the same results: injuries, insecure training, and hopelessness. Consistently injured runners never progress in their training because of so many setbacks.

With more experienced runners and coaches to learn from, they were able to see – and experience – structured training and racing. While I was lucky to have gone through the high school and collegiate levels of cross country and track, the science and art of coaching has evolved significantly in the last ten years. Using Progression to Get Faster Questions about Run Your BQ Matt’s example is especially inspiring. The Best of Strength Running: Endurance and Marathon Training. This is the second article in a 3-part series focusing on the best material on Strength Running. 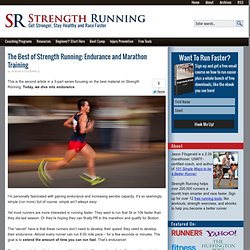 Today, we dive into endurance. I’m personally fascinated with gaining endurance and increasing aerobic capacity. It’s so seemingly simple (run more) but of course, simple ain’t always easy. Yet most runners are more interested in running faster. They want to run that 5k or 10k faster than they did last season. Half Marathon Training Schedule for Beginning Runners - HalfMarathons.Net.

Training Plans > Half Marathon Training Schedule for Beginning Runners Before starting any training for running the 13.1-mile half marathon distance, whether it's in an organized race or on your own, you should be regularly running approximately 10 to 15 miles per week. 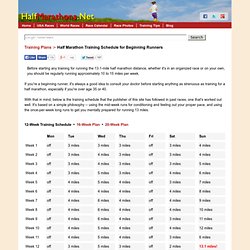 If you're a beginning runner, it's always a good idea to consult your doctor before starting anything as strenuous as training for a half marathon, especially if you're over age 35 or 40. With that in mind, below is the training schedule that the publisher of this site has followed in past races, one that's worked out well. It's based on a simple philosophy -- using the mid-week runs for conditioning and feeling out your proper pace, and using the once-per-week long runs to get you mentally prepared for running 13 miles. 12-Week Training Schedule • 16-Week Plan • 20-Week Plan Rest Days Water On your weekend long runs, make sure to bring plenty of water to drink after your run and during your run. 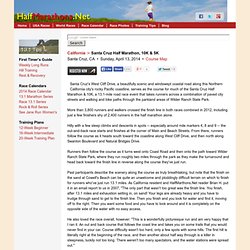 More than 3,800 runners and walkers crossed the finish line in both races combined in 2012, including just a few finishers shy of 2,400 runners in the half marathon alone. Asthma. Running Workouts - Training Tips and Techniques. Thinking about training techniques to improve your running? 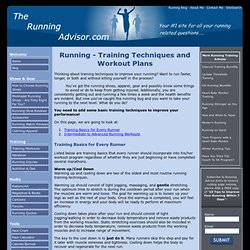 Want to run faster, longer, or both and without killing yourself in the process? You've got the running shoes, apparel, gear and possibly know some things to avoid or do to keep from getting injured. Additionally, you are consistently getting out and running a few times a week and the health benefits are evident. But now you've caught the running bug and you want to take your running to the next level. What do you do? You need to add some basic training techniques to improve your performance! Half marathon. A half marathon is a road running event of 21.0975 kilometres (13.1094 mi).[1] It is half the distance of a marathon and usually run on roads. 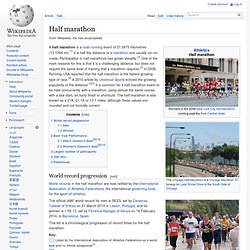 Participation in half marathons has grown steadily.[2] One of the main reasons for this is that it is a challenging distance, but does not require the same level of training that a marathon requires.[2] In 2008, Running USA reported that the half marathon is the fastest growing type of race.[2] A 2010 article by Universal Sports echoed the growing popularity of the distance.[2][3] It is common for a half marathon event to be held concurrently with a marathon, using almost the same course with a late start, an early finish or shortcuts.

The half marathon is also known as a 21K, 21.1K or 13.1 miles, although these values are rounded and not formally correct. World record progression[edit] This list is a chronological progression of record times for the half marathon. Men[edit] Women[edit] Best Year Performance[edit] Men's Season's Best[9][10][edit] Half Marathon Guide - Directory of USA and International Half Marathons. Buteyko method. Konstantin Pavlovich Buteyko The Buteyko method or Buteyko Breathing Technique is a form of complementary or alternative physical therapy that proposes the use of breathing exercises as a treatment for asthma as well as other conditions. 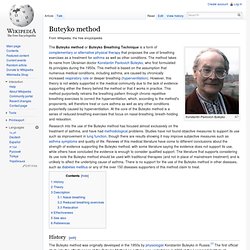 The method takes its name from Ukrainian doctor Konstantin Pavlovich Buteyko, who first formulated its principles during the 1950s. This method is based on the assumption that numerous medical conditions, including asthma, are caused by chronically increased respiratory rate or deeper breathing (hyperventilation). However, this theory is not widely supported in the medical community due to the lack of evidence supporting either the theory behind the method or that it works in practice. Research into the use of the Buteyko method has focused almost exclusively on the treatment of asthma, and have had methodological problems. Asthma 101: What Is It, Who Has It, & What Causes It.

Have you ever exercised so hard that you couldn't catch your breath? 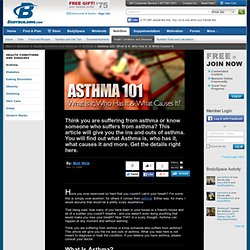 For some this is simply over exertion, for others it comes from asthma. Triathlon. A triathlon is a multiple-stage competition involving the completion of three continuous and sequential endurance disciplines.[1] While many variations of the sport exist, triathlon, in its most popular form, involves swimming, cycling, and running in immediate succession over various distances. 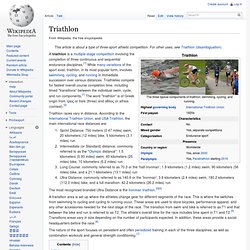 Triathletes compete for fastest overall course completion time, including timed "transitions" between the individual swim, cycle, and run components.[1] The word "triathlon" is of Greek origin from τρεις or treis (three) and αθλος or athlos (contest).[2] Triathlon races vary in distance. According to the International Triathlon Union, and USA Triathlon, the main international race distances are: The most recognized branded Ultra Distance is the Ironman triathlon.[3][4] A transition area is set up where the athletes change gear for different segments of the race.