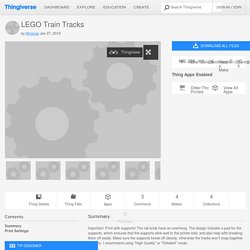 The rail ends have an overhang. The design includes a pad for the supports, which ensures that the supports stick well to the printer bed, and also help with breaking them off easily. Make sure the supports break off cleanly, otherwise the tracks won't snap together properly. I recommend using "High Quality" or "Detailed" mode.

Prints well with either PLA or ABS. A set of train tracks compatible with LEGO battery powered trains. Straight tracks are identified by number of ties. For the pieces which match standard LEGO train elements, it is probably more economical to just buy them, unless you buy your filament on sale, or have some filament left that you just want to finsh. A good source of information about LEGO track geometry is here: Lithophanes Photo Holder (Stand) by clavenmoo. Super Mario Pen/Pencil Holder by AndrewBougie. V29 by jzisa. Update By popular demand I have added a de-badged version of the V29. It is labeled V29D in the thing files section. I originally put the version number on the whistle to tell them all apart as I was developing them. I kept it on the final design because as I went through version after version it became part of the whistles story for me.

A few people have asked for a version without the text and recently Fusion 360 posted a video where they, among other things, removed the lettering from the V29 using Meshmixer. I was thrilled to see my design on my absolute favorite youtube channel and I decided to trust your feedback. The MakeItLoud V29 got its name because it is the 29th version I designed for this challenge. For ruggedness testing I spiked it into the pavement as hard as I could repeatedly. The design is meant to look as clean and simple as possible while still looking like a whistle. For loudest results blow as hards as you can in a burst!

Low poly ring by levenement71. GD Ring - Edge by GirgisDesigns. Bottle Opener Ring by O3D. 3D-printed Watch with Tourbillon by TheGoofy. This is a mechanical watch with tourbillon driven by a 3d-printed mainspring. 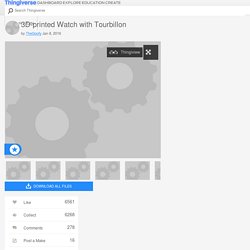 The watch has a Swiss lever escapement. The mainspring inside the going barrel keeps the watch running for approximately 30-45 Minutes. Accuracy is roughly one Second deviation within one Minute (depending on print-settings). The project demonstrates that the 3D-printing technology is developing. Compared with earlier generations of 3d-printers, the process works more reliable and more accurately. The watch is designed with Autodesk Fusion 360, and printed with Ultimaker 2. How it's made: Assembly: (Thanks to Assembly Time Lapse: Autodesk Fusion 360 Design: (all parts assembled) (main spring relaxed) Many thanks to Nicholas Manousos for his great article in HODINKEE explaining the importance of my project from a watchmakers perspective.

Printer Brand: Printer: Rafts: Supports: Resolution: Infill: Notes: 0.4 mm Nozzle Only the Pawl Unlock Key needs to be printed with support. The Hairspring needs to be printed in PLA. Modular Mounting System by yyh1002. This project is a mounting system for phones and lightweight cameras. 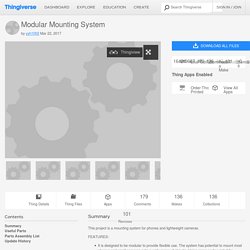 It is designed to be modular to provide flexible use. The system has potential to mount most phones and small cameras onto a wide range of objects. Using same parts printed for different purpose is the major approach. The included phone clamp can grab phones very firmly. And it is suitable for phones from about 55mm wide to 80mm wide (iPhone 4 - iPhone 7 Plus and bigger). Phone/Camera/GoPro mount for Ultimaker 2 monitoring.Phone/Camera/GoPro mount for Aluminum extrusion printers.Desk clamp for phone/camera (get the bolt from original author page).Stand for phone/camera.Headphone stand.Bike mount for phone (in remixes)And much more applications in REMIX section In order for the bolts to be strong enough to take pulling force, they cannot be printed vertically.