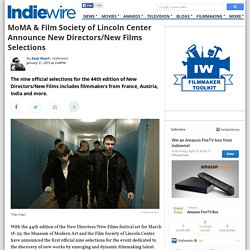 Drafthouse Films "The Tribe" With the 44th edition of the New Directors/New Films festival set for March 18-29, the Museum of Modern Art and the Film Society of Lincoln Center have announced the first official nine selections for the event dedicated to the discovery of new works by emerging and dynamic filmmaking talent. Representing 11 countries from around the world, the initial nine selections include: "Christmas, Again"Charles Poekel, USA (79 min)A forlorn Noel (Kentucker Audley) pulls long, cold nights as a Christmas-tree vendor in Greenpoint, Brooklyn. The 25 Best Films About Character’s Descent Into Madness. ‘Whom God wishes to destroy, he first turns mad.’ 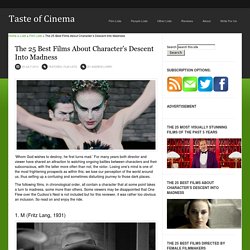 For many years both director and viewer have shared an attraction to watching ongoing battles between characters and their subconscious, with the latter more often than not, the victor. Losing one’s mind is one of the most frightening prospects as within this; we lose our perception of the world around us, thus setting up a confusing and sometimes disturbing journey to those dark places. The following films, in chronological order, all contain a character that at some point takes a turn to madness, some more than others. Independent film. 20 Essential French New Wave And Left Bank Films. Post-WWII France was a different environment for French cinema. 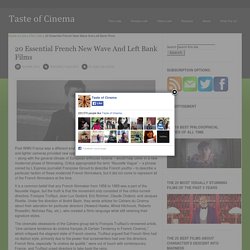 Government funding and lighter cameras provided new opportunities for aspiring filmmakers, whose innovations – along with the general climate of European arthouse cinema – would help usher in a new modernist phase of filmmaking. Critics appropriated the term “Nouvelle Vague” – a phrase coined by L’Express journalist Françoise Giroud to describe French youths – to describe a particular faction of these modernist French filmmakers, but it did not come to represent all of the French filmmakers at the time.

It is a common belief that any French filmmaker from 1958 to 1969 was a part of the Nouvelle Vague, but the truth is that the movement only consisted of five critics-turned-directors: François Truffaut, Jean-Luc Godard, Eric Rohmer, Claude Chabrol, and Jacques Rivette. The Left Bank and the New Wave were never in opposition, but they co-existed, and often times intermingled with one another. 20. 19. 18. 17. 16. 15. 14. 13. Get Accepted Into Film Festivals.

There isn't a one-size-fits-all festival plan, so we'll look at the different elements to consider when creating a festival strategy for your film. 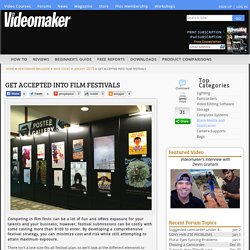 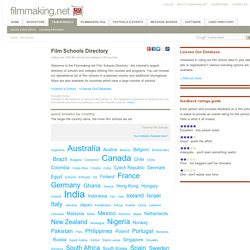 You can browse our alphabetical list of film schools in a selected country and additional city/regional filters are also available for countries which have a large number of schools. +Submit a School +License Our Database Copyright NoticeCopyright in this database is owned by filmmaking.net. The database is presented for personal use only. The Top 50 Foreign Films of the Last Decade.

It is quite clear that mainstream cinema no longer applies just to Hollywood blockbusters, or the odd British comedy. 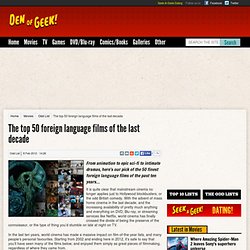 With the advent of mass home cinema in the last decade, and the increasing availability of pretty much anything and everything on DVD, Blu-ray, or streaming services like Netflix, world cinema has finally crossed the divide of being the preserve of the connoisseur, or the type of thing you’d stumble on late at night on TV. Creative Media Production (Film Making) - Summary. Why study this course Is your future in film? 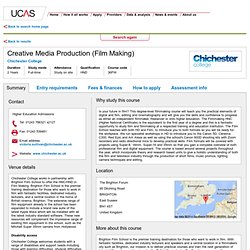 This degree-level filmmaking course will teach you the practical elements of digital and film, editing and cinematography and will give you the skills and confidence to progress as either an independent filmmaker, freelancer or onto higher education. The Filmmaking HNC (Higher National Certificate) is the equivalent to the first year of a degree and this is a fantastic opportunity to study film and filmmaking at a respected training and education institution. Werner Herzog's Rogue Film School. Is not available. TSPDT - 1,000 Greatest Films (Full List) Brighton Film School. The 25 Most Visually Stunning Films of The Past 5 Years. When someone mentions “visually stunning films”, it’s easy to associate this with films that lack real content, and instead are based mainly on images without portraying anything truly significant. 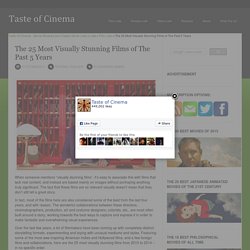 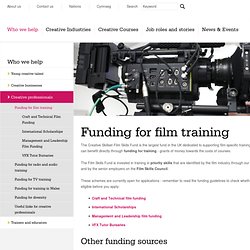 You can benefit directly through funding for training - grants of money towards the costs of courses. The Film Skills Fund is invested in training in priority skills that are identified by the film industry through our research and by the senior employers on the Film Skills Council. These schemes are currently open for applications - remember to read the funding guidelines to check whether you're eligible before you apply: Other funding sources If the training for which you wish to find funding does not fall within these priorities, there are other funding organisations that may be able to help. Other funding sources. Top 10 UK Film Schools. Choosing a film school is always tough, you have to weigh up location, course choice, and fees to name a few. 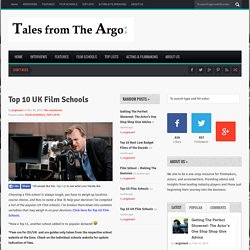 To help your decision I’ve compiled a list of the popular UK Film schools. I’ve broken them down into common variables that may weigh in on your decision. Click here for Top US Film Schools. *Now a Top 11, another school added to to popular demand! NISIMASA. Taught postgraduate courses - search results. MA Moving Image is designed to develop creative conceptual thinkers, who can deliver ideas across media using a variety of methods. Jim Jarmusch's 5 Golden Rules (or non-rules) of Moviemaking by Jim Jarmusch. Jim Jarmusch is a major proponent of independent cinema, directing features such as Dead Man, Ghost Dog: The Way of the Samurai, Coffee and Cigarettes, Broken Flowers, and The Limits of Control .

His latest film, Only Lovers Left Aliv e, premiered at the 2013 Cannes Film Festival and was nominated for the prestigious Palme d’Or. Only Lovers Left Alive stars Tom Hiddleston and Tilda Swinton as two vampires in love. Reality Bites: The 25 Best and Worst Biopics Pictures. Sundance Institute. Sparkcharts.sparknotes.com/film/film/section7.php. By the 1960s, Hollywood was in decline, unable to keep up with the radical political and cultural developments transforming American society. European films, however, fueled by government funding of film production, achieved unprecedented levels of critical acclaim and box-office success. The sophistication and creativity of these films led to the recognition of cinema as an artistic medium, not simply a form of mass entertainment.

So we’ve compiled our list of recommended titles for you—whether you love classics, comedies, documentaries or just good ol’ fashioned kung-fu. The genres vary greatly here—and range in age from brand new to 87-years-old—but all 50 of these films come with the Paste stamp of approval. The list is up to date as of February 2013, but we’ll continue to update the list from time to time as Netflix Instant changes its offerings. 50. In the LoopYear: 2009Director: Armando Iannucci If clever verbal humor were easy, we’d have more comedies like In the Loop. 49. 48. 47. 46. 45. 44. 43. 42. 41. 40. 39. 38. 37. Filmmaking Infographics.