Play Glissaria, a free online game on Kongregate. Main/Match Three Game. Casual Game Reviews Don’t Matter. On: December 14th, 2007 “[Casual gamers] are not swayed by a low score on IGN or a low score out of one of these gaming sites,” she continues. 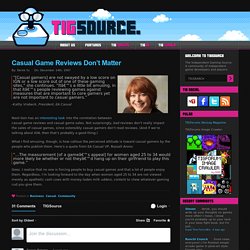 “Itâ€™s a little bit amusing, in that itâ€™s people reviewing games against measures that are important to core gamers yet are not important to casual gamers.” -Kathy Vrabeck, President, EA Casual Next-Gen has an interesting look into the correlation between casual game reviews and casual game sales. Not surprisingly, bad reviews don’t really impact the sales of casual games, since ostensibly casual gamers don’t read reviews. What I find amusing, though, is how callous the perceived attitude is toward casual gamers by the people who publish them. “…The measurement [of a gameâ€™s appeal] for women aged 25 to 34 would more likely be whether or not theyâ€™d hang up on their girlfriend to play this game.” Geez. Kloonigames » Blog Archive » M3 - Molesting the Match-3 Market. Edit 19th Dec 2007: I did a small update on the game. 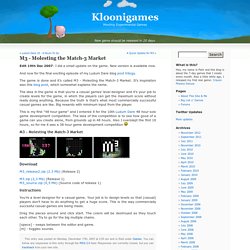 New version is available now. And now for the final exciting episode of my Ludum Dare blog post trilogy. The game is done and it’s called M3 - Molesting the Match-3 Market. It’s inspiration was this blog post, which somewhat explains the name. The idea in the game is that you’re a casual games’ level designer and it’s your job to create levels for the game, in which the players can get the maximum score without really doing anything. This is my first “48 hour game” and I entered it for the 10th Ludum Dare 48 hour solo game development competition. Swap Adjacent Gems to Make Sets of Three: A History of Matching Tile Games. A History of Matching Tile Games Jesper Juul Juul, Jesper. 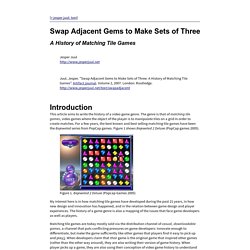 "Swap Adjacent Gems to Make Sets of Three: A History of Matching Tile Games". Artifact journal. Volume 2, 2007. London: Routledge. This article aims to write the history of a video game genre. Figure 1. My interest here is in how matching tile games have developed during the past 21 years, in how new design and innovation has happened, and in the relation between game design and player experiences. Matching tile games are today mostly sold via the distribution channel of casual, downloadable games, a channel that puts conflicting pressures on game developers: Innovate enough to differentiate, but make the game sufficiently like other games that players find it easy to pick up and play1.

Video game history is everywhere, in the development of games, in the selling of games, in the consumption of games. A popular genre with no vocal proponents Q. Aaron Steed's Blog - Match 3. The following blog post, unless otherwise noted, was written by a member of Gamasutra’s community. 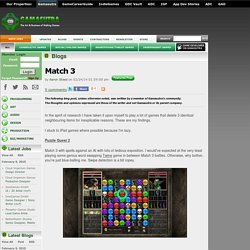 The thoughts and opinions expressed are those of the writer and not Gamasutra or its parent company. In the spirit of research I have taken it upon myself to play a lot of games that delete 3 identical neighbouring items for inexplicable reasons. These are my findings. I stuck to iPad games where possible because I'm lazy. Puzzle Quest 2 Match 3 with spells against an AI with lots of tedious exposition. I first tried Puzzle Quest on the DS. Zoo Keeper Collect matched items against the clock. Zoo Keeper has the chunky trappings of a Gobot yet its arms refuse to fall off, its decals go unblemished. Candy Crush Saga Match 3 with power ups for complex matching, environmental level objectives and mild F2P bullshit. I've already written about this. Farm Heroes Saga This is basically a Candy Crush clone relegated to the quantity of matched items objective. CC is evil, but it's an evil you respect.

From Bejeweled to Candy Crush: Finding the key to match-3. The match-3 puzzle game market is a cluttered space. 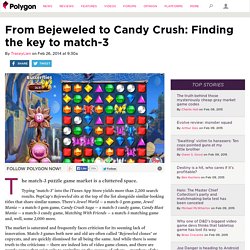 Typing "match-3" into the iTunes App Store yields more than 2,200 search results. PopCap's Bejeweled sits at the top of the list alongside similar-looking titles that share similar names. There's Jewel World — a match-3 gem game, Jewel Mania — a match-3 gem game, Candy Crush Saga — a match-3 candy game, Candy Blast Mania — a match-3 candy game, Matching With Friends — a match-3 matching game and, well, some 2,000 more. The market is saturated and frequently faces criticism for its seeming lack of innovation. Match-3 games both new and old are often called "Bejeweled clones" or copycats, and are quickly dismissed for all being the same. There was a time when all first-person shooters were known as Doom clones... " According to Knutsson, it's easy for people to be myopic and make sweeping generalizations about entire game genres and categories when they're not familiar with them.

The DNA of Candy Crush Saga and Other Successful Match-3 Games. This is the first in a series of posts analysing the most popular games genres. 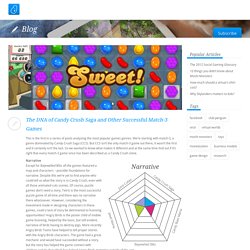 We’re starting with match-3, a genre dominated by Candy Crush Saga (CCS). But CCS isn’t the only match-3 game out there, it wasn’t the first and it certainly isn’t the last. So we wanted to know what makes it different and at the same time find out if it’s right that every match-3 game since has been described as a Candy Crush clone. Narrative Except for Bejewelled Blitz all the games featured a map and characters – possible foundations for narrative. Social Only Bejewelled Blitz and Candy Crush scored highly for social, due to the lack of competitive social elements and competitive play in both Mania games and Juice Cubes.