The “Word Gap”: A Reader. The AMC series, based on the iconic graphic series The Walking Dead, has finally included Rick admitting, “We are the walking dead” (Season 5, Episode 10). 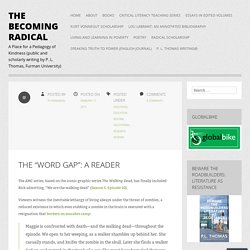 Viewers witness the inevitable lethargy of living always under the threat of zombies, a reduced existence in which even stabbing a zombie in the brain is executed with a resignation that borders on macabre camp: Maggie is confronted with death—and the walking dead—throughout the episode. We open to her weeping, as a walker shambles up behind her. She casually stands, and knifes the zombie in the skull.

Later she finds a walker tied up and gagged in the trunk of a car. Stop blaming poor parents for their children's vocabulary. While the reading wars in education have raged for decades, most people agree that literacy is crucial for children and that the path to strong reading and writing skills begins in the home. 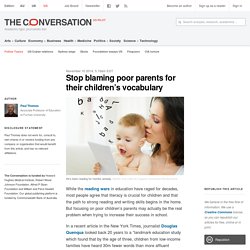 But focusing on poor children’s parents may actually be the real problem when trying to increase their success in school. In a recent article in the New York Times, journalist Douglas Quenqua looked back 20 years to a “landmark education study which found that by the age of three, children from low-income families have heard 30m fewer words than more affluent children, putting them at an educational disadvantage before they even began school.”

He detailed new research by Kathryn Hirsh-Pasek, professor of psychology at Temple University, challenging the importance of the quantity of words a child hears and emphasising the quality of language in each child’s home. That “landmark study” refers to a 1995 study by American psychologists Betty Hart and Todd Risley. Poor Kids and the 'Word Gap' According to a new initiative, launched at the White House on Thursday, the "word gap" that afflicts low-income children needs to be addressed with the same passion as child hunger. 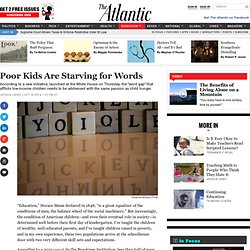 Susanne Nilsson/Flickr “Education,” Horace Mann declared in 1848, “is a great equalizer of the conditions of men, the balance wheel of the social machinery.” But increasingly, the condition of American children—and even their eventual role in society—is determined well before their first day of kindergarten. Shifting Our Deficit Gaze, Asking Different Questions about Literacy. Poor Kids and the “Word Gap” opens with an important admission by Jessica Lahey: The Horace Mann ideal that education is the “great equalizer” has not materialized (or at least, has eroded). 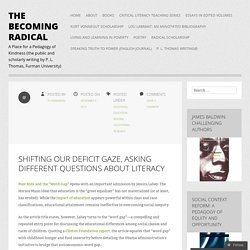 While the impact of education appears powerful within class and race classifications, educational attainment remains ineffective in overcoming social inequity. As the article title states, however, Lahey turns to the “word gap”—a compelling and repeated entry point for discussing the educational differences among social classes and races of children. Quoting a Clinton Foundation report, the article equates that “word gap” with childhood hunger and food insecurity before detailing the Obama administration’s initiative to bridge that socioeconomic word gap. But, once again, the problem persists that we remain committed to a deficit gaze, one that ultimately blames the parents of children in poverty (often the mother) for the “word gap.” Parents and Language: The Good, the Bad, and the Ugly. The Good Middle-class and affluent parents are good because they pass on to their children good cultural capital (such as good literacy). 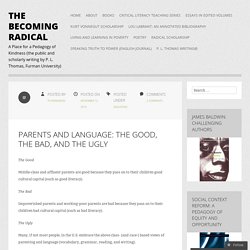 The Bad Impoverished parents and working-poor parents are bad because they pass on to their children bad cultural capital (such as bad literacy). The Ugly Many, if not most people, in the U.S. embrace the above class- (and race-) based views of parenting and language (vocabulary, grammar, reading, and writing). Grit and growth: who’s to blame for low achievement? I’ve recently read a couple of interesting articles which question the efficacy of the research of Carol Dweck (Mindset) and Angela Duckworth (Grit). 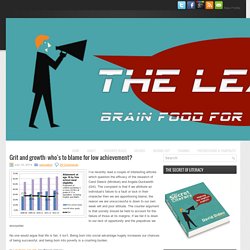 The complaint is that if we attribute an individual’s failure to a fault or lack in their character then we are apportioning blame; the reason we are unsuccessful is down to our own weak will and poor attitude. The counter argument is that society should be held to account for the failure of those at its margins; if we fail it is down to our lack of opportunity and the prejudices we encounter. No one would argue that life is fair; it isn’t. Being born into social advantage hugely increases our chances of being successful, and being born into poverty is a crushing burden. Stop blaming poor parents for their children’s limited vocabulary.

By Paul ThomasNovember 10 at 9:48 AM Paul Thomas is associate professor of education at Furman University in South Carolina. 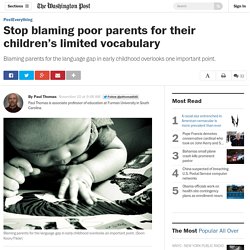 Blaming parents for the language gap in early childhood overlooks an important point. (Soon Koon/Flickr) While the reading wars in education have raged for decades, most people agree that literacy is crucial for children and that the path to strong reading and writing skills begin in the home. But focusing on poor children’s parents may actually be the real problem when trying to increase their success in school. Poor Teaching for Poor Children. April 27, 2011 Poor Teaching for Poor Children … in the Name of Reform By Alfie Kohn [This is a slightly expanded version of the published article.] 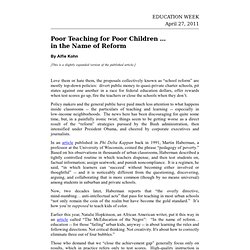 Love them or hate them, the proposals collectively known as “school reform” are mostly top-down policies: divert public money to quasi-private charter schools, pit states against one another in a race for federal education dollars, offer rewards when test scores go up, fire the teachers or close the schools when they don’t. Policy makers and the general public have paid much less attention to what happens inside classrooms -- the particulars of teaching and learning -- especially in low-income neighborhoods.

Poverty and Learning:The Myth of the Culture of Poverty. Journal of Educational Controversy - Article: Return of the Deficit. Return of the Deficit Curt Dudley-Marling Lynch School of Education, Boston College What is it about school that manages to transform children who are good at learning . . . regardless of their economic and cultural differences, into children who are not good at learning, if they are poor or members of certain minority groups?” 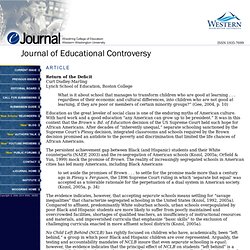 (Gee, 2004, p. 10) “What These Children Are Like”: Rejecting Deficit Views of Poverty and Language. “I am an invisible man,” begins Ralph Ellison‘s enduring modern classic Invisible Man, which transforms a science fiction standard into a metaphor for the African American condition in the U.S. 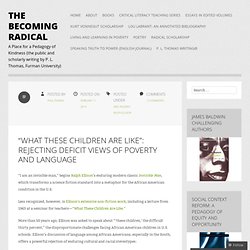 Less recognized, however, is Ellison’s extensive non-fiction work, including a lecture from 1963 at a seminar for teachers—“What These Children Are Like.” More than 50 years ago, Ellison was asked to speak about “‘these children,’ the difficult thirty percent,” the disproportionate challenges facing African American children in U.S. schools. Ellison’s discussion of language among African Americans, especially in the South, offers a powerful rejection of enduring cultural and racial stereotypes: