Curb Antibiotic Use in Farm Animals. Feedly. Read more, know more. Radiation from the Chernobyl disaster is getting worse. Nearly 30 years ago, the Chernobyl Nuclear Power Plant saw one of the worst nuclear meltdowns in history. 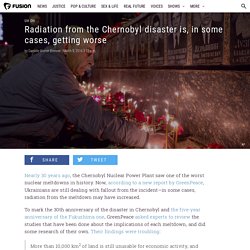 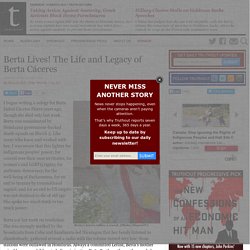 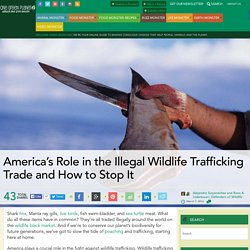 What do all these items have in common? They’re all traded illegally around the world on the wildlife black market. And if we’re to conserve our planet’s biodiversity for future generations, we’ve got to slow the tide of poaching and trafficking, starting here at home. America plays a crucial role in the fight against wildlife trafficking. Wildlife trafficking is one of the most lucrative forms of illegal activity, with an estimated annual global value of $7 billion to $23 billion. Wildlife Trafficking in the United States: The Numbers Defenders of Wildlife has spent the last year analyzing wildlife trade data from the U.S.

Between 2005 and 2014, the U.S. How Philanthropist David Rubenstein Helped Save the Carried-Interest Tax Loophole. On Aug. 23, 2011, a magnitude-5.8 earthquake shook the Washington Monument for about 20 seconds, sending tourists on the observation deck down eight hundred and ninety-seven steps. 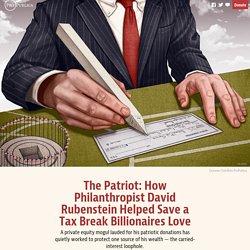 One of the two strongest quakes ever recorded east of the Rockies, it fractured two dozen of the stone protrusions that hold up the marble slabs at the monument’s peak. That December, Congress appropriated half of the $15 million required to repair the obelisk, saying that the rest would have to be raised from private citizens. Within weeks, David Rubenstein, the co-founder of the Carlyle Group, a private-equity firm, announced that he would provide the funds. CNS - <center>Study Finds Climate Change. (CN) - Rising ocean temperatures caused by climate change are driving fish populations to cooler water, and the changes will have an "inevitable and unpredictable" impact on the world's economy, according to a study by university researchers. 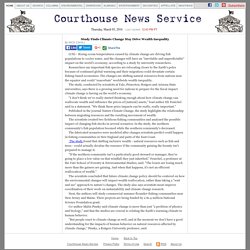 Researchers say important fish species are relocating closer to the Earth's poles because of continued global warming and their migration could devastate certain fishing-based economies. The changes are shifting natural resources from nations near the equator and could "exacerbate" worldwide wealth inequality. US presidential race: why the world should be afraid of a Trump presidency. In 1948, more than half a century ago, Harry Truman was re-elected president of the United States after pollsters had tipped a win for his Republican rival, Thomas Dewey. 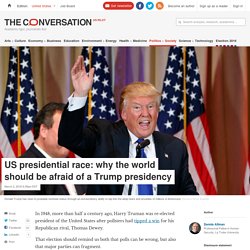 That election should remind us both that polls can be wrong, but also that major parties can fragment. Truman lost four deep southern states to Dixiecrat Strom Thurmond. This was a harbinger of the shift that has turned the American South into the bastion of the Republican Party. The electoral map of 1948 is almost a mirror image of current alignments, although the large states of the industrial mid-West remain the most contested terrain. 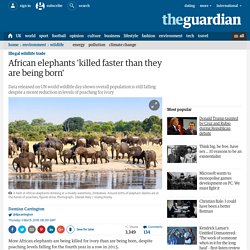 How to Make Sense of Your Cholesterol Levels (Infographic) Understanding Cholesterol: How to Stay Within the Healthy Range High cholesterol has been associated with poor health and an increased risk of heart disease for the last two decades. 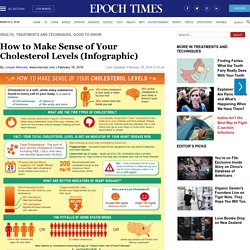 This idea immediately spawned myths about saturated fats, which demonized certain categories of food, like eggs and healthy oils. Most physicians will advise you to keep your cholesterol levels as low as possible, or else suffer serious complications. But did you know that high cholesterol is not necessarily a precursor to poor health nor is it an indicator of heart disease? In my years of practice, I have seen people whose total cholesterol levels were over 250 but had a low risk of developing heart disease. 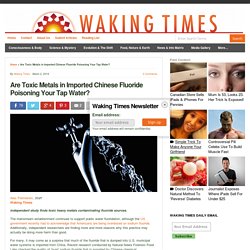 Poisoned City: Flint and the Specter of Domestic Terrorism. (Image: Lauren Walker / Truthout)In the current age of free-market frenzy, privatization, commodification and deregulation, Americans are no longer bound by or interested in historical memory, connecting narratives or modes of thinking that allow them to translate private troubles into broader systemic considerations. 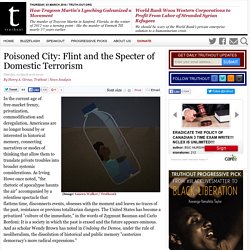 As Irving Howe once noted, "the rhetoric of apocalypse haunts the air" accompanied by a relentless spectacle that flattens time, disconnects events, obsesses with the moment and leaves no traces of the past, resistance or previous totalitarian dangers. The United States has become a privatized "culture of the immediate," in the words of Zygmunt Bauman and Carlo Bordoni: It is a society in which the past is erased and the future appears ominous.

And as scholar Wendy Brown has noted in Undoing the Demos, under the rule of neoliberalism, the dissolution of historical and public memory "cauterizes democracy's more radical expressions. " To read more articles by Henry A. Will South Korea End its Dog Meat Trade in Time for the Winter Olympics? South Korea is the only country in the world known to commercially farm dogs to supply the nation’s demand for dog meat and associated products. Thousands of farms are located throughout the peninsula, ranging in size from small, backyard enterprises to huge farms housing thousands of dogs. What Stark Images of Two Seals Swimming Show Us About How Our Daily Choices Impact the Oceans. When we think about the most influential marine species, animals like sharks and whales typically come to mind, but in the past few decades, a new species has emerged as a driving force behind the shifting marine environment: humans. Although we are a terrestrial species, humans have had an enormous impact on the world’s oceans, and our actions have shaped and formed the underwater world that we know today.

Unfortunately, this influence is not a positive one. Between ocean acidification driven by greenhouse gas emissions, overfishing, agricultural runoff, and pollution, we’ve turned the world’s pristine waters into a bit of a glorified dumping ground. As a result, the marine species that we might associate with dominating the oceans are in decline. Not to mention, our ever-growing obsession with plastics is also causing serious damage.

Coral Reef Die-Off Breaks History Records Due To Climate Change, El Niño. Scientists have warned that one of the biggest global bleaching of coral reefs in history is underway, due to El Niño. By Amanda Cristina | Feb 25, 2016 02:55 PM EST Scientists warn of one of the biggest coral reef die-offs in history, due to the climate change effect of El Niño. (Photo : Twitter/Joseph_Causes) Scientists have warned that a global coral reef die-off is expected to be the biggest in history, due to climate change and a very strong El Niño. This latest event began in 2014 in the western Pacific Ocean and could continue to 2017, according to the National Oceanic and Atmospheric Administration. Farm report: Montana to lose millions to climate change.

BILLINGS – Montana agriculture losses to climate change could total $736 million a year, estimates an economic study prepared for Montana Farmers Union. Warmer temperatures and drier summers are withering the future of Montana spring wheat, a major cash crop for state farmers, according to the report released recently. Over time, those changing conditions will cost the state $372 million on labor earnings due to 12,167 jobs lost to declined production.

Range land losses due to dry conditions and changing plant life, will cut labor earnings related to cattle production by $364 million, and job losses similar to those for grain. “As far as most of us are concerned, it’s already happening and we’re trying to figure out how to make money with what’s already happening and stay in business,” said Erik Somerfeld, and MFU member who farms in the Golden Triangle of northcentral Montana. Finally! U.S. Bans Imports of Illegal Seafood Caught by Slave Labor. Does China Have Enough Reserves to Defend Its Currency? Shorting the Chinese currency is the most popular trade among hedge funds in 2016. As Rivers Run Black in Peru, Indigenous Tribes Left Cleaning Big Oil's Disaster. We Can't Solve Climate Change Without Teaching It - Why More Classes Are Heading Outside. (Image: Environmental study via Shutterstock)

Nevada's solar workers and customers reel as new rules 'shut down' industry. WTO swats down India’s massive solar initiative. As Trump Gains Momentum, Both Sides Ask: Who Can Stop Him? Glyphosate is Ruining Your Gut and Triggering Autoimmune Disorders. Dr. Sugar Identified as a Top Cause of the Global Cancer Epidemic. Nevada Residents Fight Energy Monopoly's Attempts to Control Solar Power. Australia's digital divide is narrowing, but getting deeper. FactCheck: do Australians with an average seafood diet ingest 11,000 pieces of plastic a year? Energy markets: the planet's unlikely new ally in the emissions effort. What Your Food Choices Have to do With Rhinos, Elephants, and Orangutans.

Elephants Are Harmed for More Than Their Ivory – Here Are Three Products to Avoid. The Newest Strategy for Saving Bees Is Really, Really Old. China's Economic Recession Shatters Global Dreams of Prosperity. Trickle-down economics is the greatest broken promise of our lifetime. Nothing Less Than Fate of Planet Hinges on Next Supreme Court Nominee. Landmark Survey Shows For-Profit Water is a Risky Rip-Off. Beached America. The IMF Confirms That 'Trickle-Down' Economics Is, Indeed, a Joke. Ivory Might be On the Way Out … But Elephant Leather Sales Are on the Rise. The Department of Defense Is the Third Largest Polluter of US Waterways. Blowing the Whistle on Monsanto Might Pay Off Big Time for Former Employee.