We tend to get the World we deserve - if we collectively abuse it there will be abysmal outcomes that we, or our descendents, will decidedly regret.

It is time to ACT and the action folks starts with YOU and I.

Most are just willing to "free load" and leave the "hard yards" to others and that is untenable and deplorable! Such inaction has seen the willing "burn out" through over-work while the apathetic can live the "easy life" and foster selfish interest.

As a mature guy I will say it as it is - get off that "rear end" and become involved - we are heading for times where our collective future is most definitely being decided by Mother Nature. Our "easy options" to many important issues no longer exist! Aboriginal fire management – part of the solution to destructive bushfires. As destructive bushfires become more common there is increasing political discussion how we manage them sustainably. 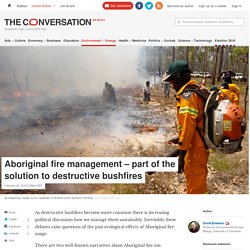 Inevitably these debates raise questions of the past ecological effects of Aboriginal fire usage.

Poachers Killed More Than 1,000 Rhinos for the Third Year in a Row. How Japan is Fueling the Slaughter of Elephants. Before Chinese demand for ivory began driving the black market and illegal killing of tens of thousands of elephants each year, it was Japan’s market for hanko, personal seals used to sign contracts, that fueled the ivory trade. 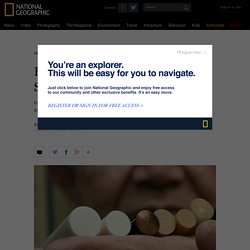 For at least a thousand years, they’ve been made in Japan out of a variety of materials. In the early part of the 20th century, most were created from water buffalo horn, wood, or crystal. But as the Japanese economy began to grow in the 1950s, ivory hankos rose in popularity. Crop Failure and Fading Food Supplies: Climate Change's Lasting Impact. Marlene Cimons is a Washington, D.C. based freelance writer who specializes in science, health and the environment. 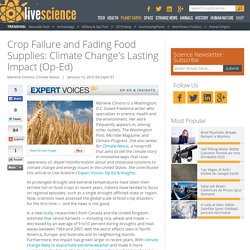 Her work frequently appears in, among other outlets, The Washington Post, Microbe Magazine, and Climate Progress. She also writes for Climate Nexus, a nonprofit that aims to tell the climate story in innovative ways that raise awareness of, dispel misinformation about and showcase solutions to climate change and energy issues in the United States. She contributed this article to Live Science's Expert Voices: Op-Ed & Insights.

As prolonged drought and extreme temperatures have taken their terrible toll on food crops in recent years, nations have tended to focus on regional episodes, such as a single drought-afflicted state or region. Now, scientists have assessed the global scale of food crop disasters for the first time — and the news is not good. Fading food supplies Keeping food on the table. Instead Of Ice, This Polar Bear Has Trash to Live On – How We Can All Act to Change This. A polar bear foraging through a garbage dump … not exactly the place one would expect to see one of these iconic animals. 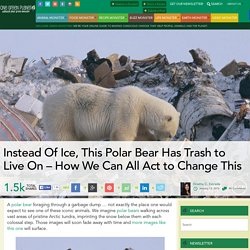 We imagine polar bears walking across vast areas of pristine Arctic tundra, imprinting the snow below them with each colossal step. Those images will soon fade away with time and more images like this one will surface. Why oil prices are plunging - again. Despite sharply rising tensions in the Middle East, oil prices had seemed fairly stable - if quite low - as 2016 began. 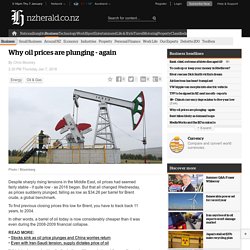 But that all changed Wednesday, as prices suddenly plunged, falling as low as $34.26 per barrel for Brent crude, a global benchmark. To find previous closing prices this low for Brent, you have to track back 11 years, to 2004. Rate of climate change unseen in history of the planet. The pace of climate change is unprecedented in the history of the planet, new research suggests. 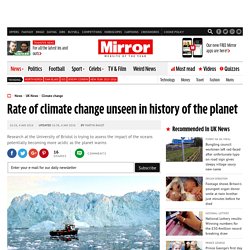 The study has assessed the current rate at which carbon dioxide is increasing in the atmosphere and compared it to the rise during a natural environmental change that happened 120 million years ago. It found previous natural increases in CO2 before humans evolved were not as steep as those being seen today. Scary Truth Behind Global Carbon Dioxide Levels and Why We Need to Act NOW! Not to be too much of a Debby Downer, but we really need to talk about some not-so-good news that’s recently developed in our battle with climate change. 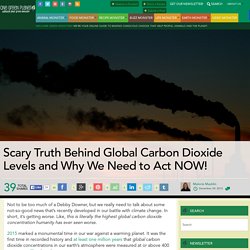 In short, it’s getting worse. Like, this is literally the highest global carbon dioxide concentration humanity has ever seen worse. 2015 marked a monumental time in our war against a warming planet. It was the first time in recorded history and at least one million years that global carbon dioxide concentrations in our earth’s atmosphere were measured at or above 400 parts per million (ppm).

The news that global carbon dioxide concentrations are inching ever higher by the year is very unwelcome, but it’s important to understand what this data has to teach us so that we might act accordingly. Nun killed in Brazil an unflinching advocate / Peasants' defender buried in Amazon. People carry the casket containing the body of American missionary Dorothy Stang, from Ohio, to the cementery in Anapu, 2,100 kilometers (1,300 miles) north of Sao Paulo, Brazil, on Tuesday, Feb. 15, 2005. 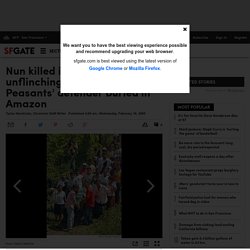 How Slowing Down Can Make Room for Kindness. This might be the coolest photo of a farm you'll ever see. When Brazilian farmer Ernst Gotsch bought 1,200 acres of completely deforested land on the edge of the rainforest in 1984, it was known as "Dry Lands. 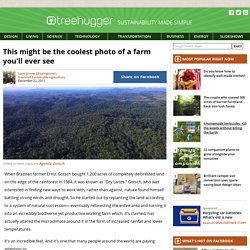 " Gotsch, who was interested in finding new ways to work with, rather than against, nature found himself battling strong winds and drought. So he started out by replanting the land according to a system of natural succession—eventually reforesting the entire area and turning it into an incredibly biodiverse yet productive working farm which, it's claimed, has actually altered the microclimate around it in the form of increased rainfall and lower temperatures.

It's an incredible feat. And it's one that many people around the world are paying attention to. $100 Billion in Tax Revenue Lost Every Year Due to Loopholes for Multinationals. On 60 minutes, Apple CEO Tim Cook says accusations of tax avoidance schemes are 'total political crap', but economist James Henry says it's unfair for corporations to simply wash their hands of having to share the costs of government - Bio James S. 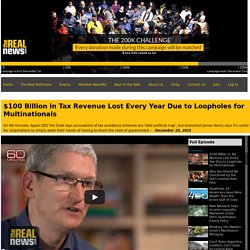 Henry is a leading economist, attorney and investigative journalist who has written extensively about global issues. James served as Chief Economist at the international consultancy firm McKinsey & Co. Brazil’s government charged with ethnocide in building of Amazon dam. Brazil’s Public Federal Ministry (Ministério Público Federal, MPF), an independent state body, has started legal proceedings to have it recognised that the crime of “ethnocide” was committed on seven indigenous groups due to the severe detrimental impacts on their lives made by the building of the giant Belo Monte hydroelectric power station that will soon begin operating on the Xingu River in eastern Amazonia.

The charges have been made against Brazil’s federal government and Norte Energia, the contractor that built the dam. After carrying out a lengthy study that fills 50 books and includes contributions from a wide range of experts, the MPF has concluded that the “social organization, customs, languages and traditions” of the indigenous groups have been destroyed by the construction of the dam. Antibiotics Expert Warns It's 'Almost Too Late' to Stop Global Superbug.

Following the discovery in the UK of bacteria that resist the most common antibiotic of last resort, a leading British expert is warning it is "almost too late" to stop a global superbug crisis. "The routine preventative use in farming of colistin, and all antibiotics important in human medicine, needs to be banned immediately. "—Cóilín Nunan, Alliance to Save Our Antibiotics News outlets reported Monday that UK government scientists have found a gene, known as mcr-1, that gives bacteria resistance to colistin, often used by doctors when other antibiotics fail.

Such resistance was first discovered last month in China, and in the past few weeks, the resistance gene has also been found in Denmark, France, the Netherlands, Portugal, and in several Asian and African countries. Montana Faces The Devastating Economic Costs Of Climate Inaction. Global warming could severely hamper the outdoor economy of the nature rich state of Montana, a new study by the state’s oldest conservation organization found.

Thousands of jobs and about a billion dollars in earnings may be at jeopardy in the coming decades, the group found. As many as 36,000 jobs and slightly over a billion dollars in labor earning could be lost in the next 35 years if greenhouse gas emissions don’t decline, according to the study commissioned by Montana Wildlife Federation. Mass Atrocity in China Remains Out of Media Limelight. World Climate Change Conference Confirms Near Term Human Extinction - GOP Candidates Receive Failing Grades on Climate as 2015 Smashes Global Temperature Records. Gmail - Free Storage and Email from Google. After 40 Years of Pain, 'Napalm Girl' May Find Relief With Laser Treatment. Takepart.

Takepart. The Biggest Climate-Change Stories in 2015. This Is the Missing Ingredient in the Climate Change Fight. Missing Tropical Animals Could Hasten Climate Change. As go toucans, spider monkeys and tapirs, so goes the climate. Put another way, the hunting and poaching of tropical animals could change the face of rainforests such as the Amazon, diminishing their ability to store global carbon dioxide emissions by up to 20 percent. Coal's Hidden "Double Whammy" When forests are cleared for coal mines, the threat to the planet multiplies through increased carbon emissions, and the lives of those living in the forests are often devastated. As flames devour Brazil's Indigenous Lands, communities go hungry.

This Is What It's Like to Make a Discovery in the Amazon Rainforest  See What Climate Change Means for the World’s Poor. Amazon rainforest UNDER THREAT: El Nino fans forest fires into DEVASTATING infernos. Climate change is the challenge of our generation - here's how we tackle it. How Anxiety Around Climate Change Blocks Us From Taking Action. 19 VIPs Who Get Climate Change Better Than Congress.

Borneo orangutans survive forest fires and village attack. On the Verge of the Great Unraveling. Bernie Sanders: Climate Change Is A 'Major Planetary Crisis' And The U.S. Must Act Now. Scientists Say The Amazon Is Still Teaching Us New Lessons. Brazil on fire: The Amazon and its guardians are under constant threat – Latin Correspondent. The Eco-Apocalypse in Indonesia That No One is Talking About.

Seething With Anger, Probe Demanded into Exxon's Unparalleled Climate Crime. Rampant wildfires in Indonesia are accelerated by El Niño and releasing epic proportions of GHGs. Indonesia is burning. So why is the world looking away? How U.S. Citizens Are Stepping Up and Helping to Shut Down the Illegal Wildlife Trade. Can Peru stop ‘ethical chocolate’ from destroying the Amazon? Australia's climate change 'debate' all talk and no action.