Turmeric Golden Milk - The Ancient Drink That Will Change Your Life. Golden milk is a delicious drink made from turmeric and it has many health benefits for the whole family. 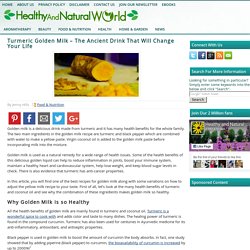 The two main ingredients in the golden milk recipe are turmeric and black pepper which are combined with water to make a yellow paste. Virgin coconut oil is added to the golden milk paste before incorporating milk into the mixture. Golden milk is used as a natural remedy for a wide range of health issues. Some of the health benefits of this delicious golden liquid can help to reduce inflammation in joints, boost your immune system, maintain a healthy heart and cardiovascular system, help lose weight, and keep blood sugar levels in check. There is also evidence that turmeric has anti-cancer properties. MAHAMASHA THAILAM - Kerala Ayurveda Limited.

Candida Overgrowth: How To Tell If You Have Candida & A Candida Diet Solution - mindbodygreen. You might be wondering: What on earth is candida? 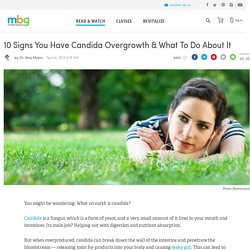 Candida is a fungus, which is a form of yeast, and a very small amount of it lives in your mouth and intestines. Its main job? Helping out with digestion and nutrient absorption. But when overproduced, candida can break down the wall of the intestine and penetrate the bloodstream — releasing toxic by-products into your body and causing leaky gut. Caprylic Acid: Coconut Oil’s Secret. Coconut oil has recently become one of the hottest trends. 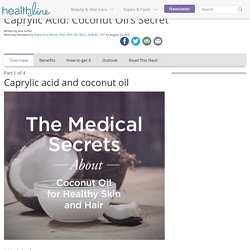 It’s touted as a one-stop solution to everything. Although it’s commonly used for cooking, coconut oil has many everyday uses. It can be used to moisturize skin, remove makeup, repel bugs, and clean laundry. Coconut oil also has medicinal uses. 4 Steps to Heal Leaky Gut and Autoimmune Disease. Bacterial imbalance The most common components of food that can damage your intestinal lining are the proteins found in un-sprouted grains, sugar, GMO’s and conventional dairy.The problem with un-sprouted grains is that they contain large amounts of antinutrients or nutrient blockers called phytates and lectins. 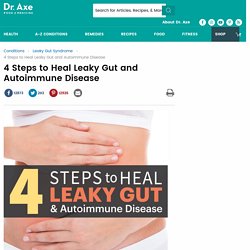 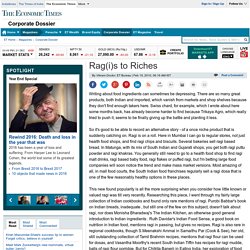 There are so many great products, both Indian and imported, which vanish from markets and shop shelves because they don't find enough takers here. Swiss chard, for example, which I wrote about here some months back, has already become harder to find because Trikaya Agro, which really tried to push it, seems to be finally giving up the battle and planting it less. So it's good to be able to record an alternative story - of a once niche product that is suddenly catching on. Ragi is on a roll. Kurakkan Flour Faltbreads - Ragi Roti - My SriLankan Recipes. Kurakkan is one of the staple food in Sri Lanka, especially in the drier areas. 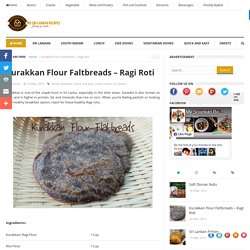 Karaoke is also known as Ragi, and is higher in protein, fat and minerals than rice or corn. When you’re feeling peckish or looking for a healthy breakfast option, reach for these healthy Ragi rotis. Ingredients:- How I made it:- Sift the both of the flours into a bowl and mix with, grated coconut, Ghee, salt and add sufficient water in a medium bowl.Form a soft and smooth dough that does not stick to the hands. Related. □Ragi Almond Drink - Ragi Malt Recipe - Ragi Badam Shake. Ragi Almond Drink Calcuim-rich wonder grain, Finger millet aka Ragi helps cool our body during summer. 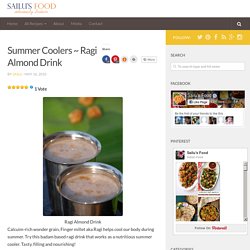 Coconut Ragi Pancake - All. Dr Bach's system of 38 flower remedies. Each of the 38 remedies discovered by Dr Bach is directed at a particular characteristic or emotional state. 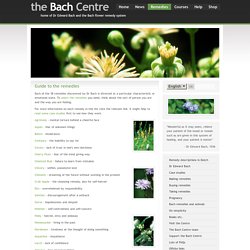 To select the remedies you need, think about the sort of person you are and the way you are feeling. For more information on each remedy in this list click the relevant link. It might help to read some case studies first to see how they work. Agrimony - mental torture behind a cheerful face Aspen - fear of unknown things Beech - intolerance Centaury - the inability to say 'no' Cerato - lack of trust in one's own decisions Cherry Plum - fear of the mind giving way Chestnut Bud - failure to learn from mistakes Chicory - selfish, possessive love Clematis - dreaming of the future without working in the present.

Impatiens. ...is, as its name suggests, the remedy for impatience and the frustration and irritability that often go with it. 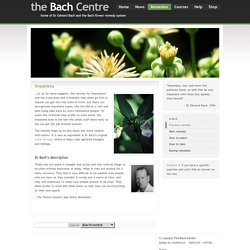 Anyone can get into this state of mind, but there are also genuine Impatiens types, who live life at a rush and hate being held back by more methodical people. To avoid this irritation they prefer to work alone: the Impatiens boss is the one who sends staff home early so she can get the job finished quicker. The remedy helps us be less hasty and more relaxed with others. Star of Bethlehem. ...is one of the remedies in the traditional crisis formula. 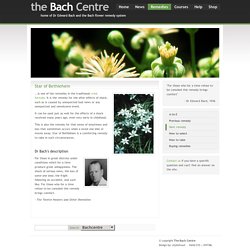 It is the remedy for the after-effects of shock, such as is caused by unexpected bad news or any unexpected and unwelcome event. It can be used just as well for the effects of a shock received many years ago, even very early in childhood. Walnut. ...is the remedy to help protect us against outside influences in general, and against the effects of change in particular. Walnut people are fulfilling their purpose in life but sometimes doubt their path when they hear the opinions, theories or beliefs of others. Unlike Cerato people, those in a Walnut state don't actively seek out the opinions of others.

But opinions are offered anyway: they may be affected almost despite themselves. Star of Bethlehem. Gentian. ...is for that relatively mild downheartedness we sometimes feel when things go wrong. We miss a bus; fail an exam; miss out on an opportunity: it knocks us back. Often the feeling lifts by itself, but the remedy can be used to lift it sooner so that we are able to make things go right instead of just hoping they will. Gentian is often confused with Gorse, which is also a remedy for feeling down when things go wrong. The difference is largely one of degree. Dr Bach's system of 38 flower remedies.