The Swiss Ramble. PSG move would be a ‘dream’ for Neymar, says player’s agent. Neymar could be tempted by a move from Barcelona to Paris Saint-Germain, the Brazil forward’s agent has claimed. 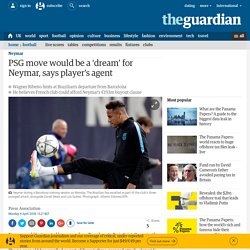 The 24-year-old has excelled as part of Barça’s three-pronged attack, alongside Lionel Messi and Luis Suárez, with the club six points clear at the top of the La Liga, through to the final of the Copa del Rey final and into the Champions League quarter-finals. He has a release clause of €193m (£154m) in his contract according to his representative Wagner Ribeiro, who nevertheless feels a “dream” move to PSG is a possibility. “Neymar has a contract with Barça until 2018,” Ribeiro told L’Equipe. “He feels good in Barcelona, he’s loved over there and he’s playing for the best team in the world. It’s no small feat to impose yourself at such an enormous club. “We’ll see in two years, when he will be at the end of his contract.”

A move could happen even before then, though, with Ribeiro acknowledging PSG are one of the few teams in the world capable of funding a move for the player. The Swiss Ramble: Leicester City. The story of the season is undoubtedly Leicester City. 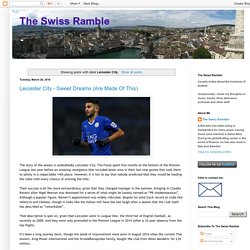 The Foxes spent five months at the bottom of the Premier League last year before an amazing resurgence that included seven wins in their last nine games that took them to safety in a respectable 14th place. However, it is fair to say that nobody predicted that they would be leading the table with every chance of winning the title. Their success is all the more extraordinary, given that they changed manager in the summer, bringing in Claudio Ranieri after Nigel Pearson was dismissed for a series of what might be loosely termed as “PR misdemeanours”. Although a popular figure, Ranieri’s appointment was widely ridiculed, despite his solid track record at clubs like Valencia and Chelsea, though it looks like the Italian will have the last laugh after a season that the club itself has described as “remarkable”.

"Keep the party going" "Happy talk" The club’s ambitions are altogether different these days. "Wes One (shine on me)" "Born to run" The Swiss Ramble: Paris Saint-Germain. So, barring any problems with a medical, Zlatan Ibrahimovic will today sign for Paris-Saint Germain. 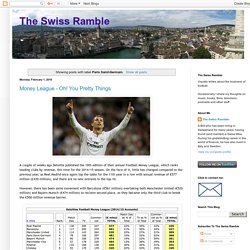 Many in the football world have been shocked by PSG’s audacious €65 million swoop for the Milan duo of Ibrahimovic and Thiago Silva, but it really should come as no surprise given the club’s massive transfer outlay ever since it was purchased by Qatar Sports Investments (QSI) last summer. In much the same way as Manchester City did when they signed Robinho after their Abu Dhabi takeover, PSG immediately made a resounding statement of intent when they shattered the French transfer record with the €42 million purchase of Argentine playmaker Javier Pastore from Palermo.

They also scooped up the cream of French football, buying Ligue 1 leading scorer Kevin Gameiro and powerful midfielder Blaise Matuidi, while raiding Serie A for Jérémy Menez (from Roma), Mohamed Sissoko (Juventus) and Salvatore Sirigu (Palermo), and securing the services of the Uruguayan captain Diego Lugano (Fenerbahce). 2106899 DOWNLOAD. Paris Saint-Germain may have up to £228m to spend this summer after FFP restrictions.

PSG have ambitions to establish themselves as member of Europe's eliteFinancial Fair Play restrictions have reined in their spending recentlyBut French league leaders should be free to splash out in summer 2016Press in France believe they will have €300m (£228m) available to spend By Oliver Todd for MailOnline Published: 10:22 GMT, 27 January 2016 | Updated: 12:24 GMT, 27 January 2016 Paris Saint-Germain expect to have the shackles of Financial Fair Play almost-fully removed this summer to open the door for a huge spend of up to £228million. 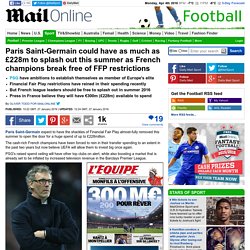 The cash-rich French champions have been forced to rein in their transfer spending to an extent in the past two years but now believe UEFA will allow them to invest big once again. PSG's raised spend ceiling will have other top clubs on alert, while also boosting a market that is already set to be inflated by increased television revenue in the Barclays Premier League. They had suffered the limitation of a €60m (£42.5m) transfer budget last summer. Paris strengthens its position among the top 10 - Club. The club was one of European football’s fastest-growing brands and thus strengthened the top 10 position which it had achieved the previous year. 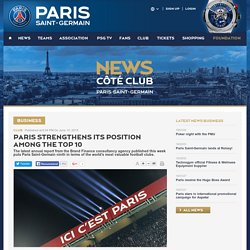 The study reports that the brand has increased its value by 67% in the space of a year. This can be particularly attributed to Match Day revenues which rose by 57%, commercial revenue which was up USD 182 million year-on-year as well as a fast-increasing international fan base. "These constantly growing results prove that our project is moving ahead in the right direction," said Nasser Al-Khelaifi, President of Paris Saint-Germain. “We remain focused on our goal to become one of the top 10 global sports brands. Next season we will have to continue our hard work to keep on growing our club reputation both in France and in the world. " In terms of Match Day revenue, Paris Saint-Germain focused investment on renovation work at the Parc des Princes to expand its hospitality packages. Charlie stillinano. Charlie Stillitano’s Champions League plans are an insult to Leicester ... www.theguardian.com/football/2016/mar/04/charlie-stillitano-champions-league-leicester Charlie Stillitano’s Champions League plans are an insult to Leicester City – and football Man Utd, Leicester, Champions League Discussed by Charlie Stillitano bleacherreport.com/articles/2621827-manchester-united-leicester-champions-league-discussed-by-charlie-stillitano Charlie Stillitano, an American sports executive and chairman of Relevent Sports —which hosts the pre-season International Champions Cup tournament ... 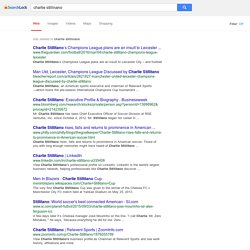