Boarding Edu Patna India - boarding school,educational institutions. Sainik School, Lucknow, Uttar Pradesh , Boarding Edu. Much before anyone in the country thought of setting up an institution as a nursery for the National Defence Academy (NDA), Dr Sampurnanad, the then Chief Minister of Uttar Pradesh, had the vision and foresight of conceiving the idea. 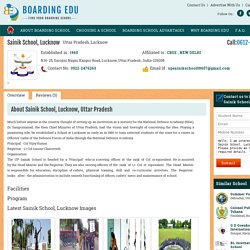 Playing a pioneering role, he established a School at Lucknow as early as in 1960 to train selected students of the state for a career in Officers’ cadre of the Defence Forces of India through the National Defence Academy. Principal - Col Vijay Kumar Registrar - Lt Col Gaurav Chaturvedi Organisation: The UP Sainik School is headed by a ‘Principal’ who is a serving officer of the rank of Col or equivalent. 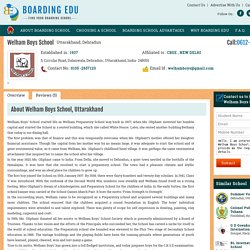 Oliphant invested her humble capital and started the School in a rented building, which she called White House. Later, she rented another building Bethany that today is our dining hall. The first problem was that of finance and this was temporarily overcome when Ms. Oliphant’s mother offered her daughter financial assistance. Though the capital from her mother was by no means large, it was adequate to start the school and of great sentimental value, as it came from Welham, Ms.

In the year 1920, Ms. The first boy joined the School on 15th January 1937. In the succeeding years, Welham came to be recognized as a Preparatory school and acquired several buildings and many more children. In 1956, Ms. True to its motto, Welham Boys’ has grown into a full fledged institution, and today prepares boys for the C.B.S.E examination. 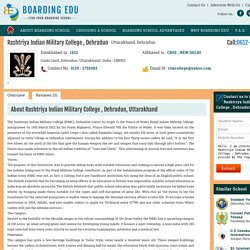 It was then located on the premises of the erstwhile Imperial Cadet Corps ( also called Rajwada Camp), set amidst 138 acres of lush green countryside adjacent to Garhi Village in Dehradun Cantonment. During his address to the first thirty-seven cadets he said, "It is the first few blows on the anvil of the life that give the human weapon the set and temper that carry him through life's battles". The Prince also made reference to the old Indian tradition of "Guru and Chela". This relationship of mutual love and reverence has formed the basis of RIMC ethos. Vision : The Campus : Panorama: The campus has quite a few heritage buildings in Tudor Style, some nearly a hundred years old. Ramakrishna Mission Vidyalaya, Kolkata , Boarding Edu. Swami Vivekananda used to say that education is the panacea of all social evils. 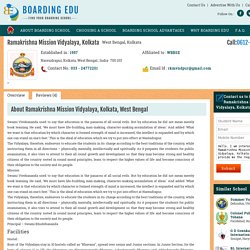 But by education he did not mean merely book learning. He said, 'We must have life-building, man-making, character-making assimilation of ideas.' And added 'What we want is that education by which character is formed strength of mind is increased, the intellect is expanded and by which one can stand on one's feet.' This is the ideal of education which we try to put into effect at Narendrapur. Jawahar Navodaya Vidyalaya, Chandigarh , Boarding Edu. In accordance of the National Policy of Education (1986) Government of India started JawaharNavodayaVidyalayas (JNVs). 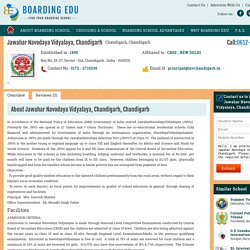 Presently the JNVs are spread in 27 States and 7 Union Territories. These are co-educational residential schools fully financed and administered by Government of India through an autonomous organization, NavodayaVidyalayaSamiti. Admission in JNVs are made through the JawaharNavodaya Selection Test (JNVST) at Class VI. The medium of instruction in JNVs is the mother-toung or regional language up to class VIII and English thereafter for Maths and Science and Hindi for Social Science. Sainik School , Tamilnadu , Boarding Edu. Sainik school, Amaravathinagar is an English medium, residential school for boys providing Public School Education with a military bias, located at Udumalpet, Tirupur Dist, Tamil Nadu. 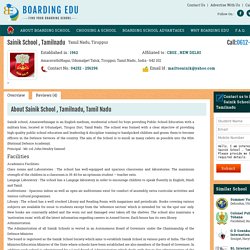 The school was formed with a clear objective of providing high-quality public school education and leadership & discipline training to handpicked children and groom them to become officers in the Defence Services of the country. The aim of the School is to enroll as many cadets as possible into the NDA (National Defence Academy). Principal - Mr. col John Hendry Samuel Facilities Academics Facilities: Class rooms and Laboratories : The school has well-equipped and spacious classrooms and laboratories. Languge Laboratory : The school has a Languge laboratory in order to encourage children to speak fluently in English, Hindi and Tamil. Auditoriums : Spacious indoor as well as open-air auditoriums exist for conduct of assembly, extra curricular activities and various cultural programmes. Administration Program. Residential School in India - Boarding Edu.