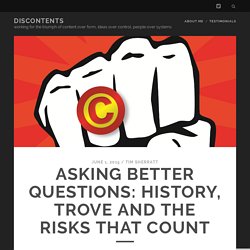 It’s reproduced here with the permission of the publishers. You can buy a copy of the book from NewSouth Press or just about any bookstore. You can also download a pdf version of this chapter. A few years ago historian Kate Bagnall and I created ‘The real face of White Australia’. In 1901 the Immigration Restriction Act gave legislative force to a system of racial exclusion and control that came to be known as the White Australia Policy.

The faces come from portrait photographs that were attached to official certificates. To extract the faces I reverse-engineered the National Archives’ online database to automatically harvest images of the documents. The whole thing was a quick experiment, mostly completed over the space of a weekend, but its influence has been widely felt. Surely there are better questions to ask? TROVE 7 is coming soon. Trove and the world cultural collections in a global environment. Seams and edges: Dreams of aggregation, access & discovery in a broken world – discontents. Presented at ALIA Online 2015, 3 February 2015 in Sydney. 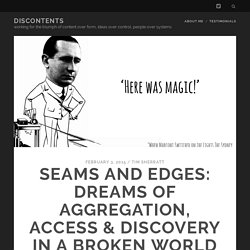 A longer version with bonus references will be made available on the ALIA Online site. Slides are on Slideshare. In March 1930 the Sydney Electrical and Radio Exhibition opened in a blaze of excitement. Aboard his yacht in Genoa, inventor Guglielmo Marconi triggered a radio signal that reached across the world and switched on more than 2800 electric lights at the Sydney Town Hall. ‘All in less than a second!’ According to the Sydney Morning Herald, radio had ‘eliminated time and distance’. About a month later the British and Australian Prime Ministers spoke for the first time via wireless telephone. Sounds familiar? From railways to the telegraph, radio, and the internet, the progress of technology has often been imagined as a battle against time and space. Remember when we used to talk about the ‘Information superhighway’? Technology promises instant access to information — a future beyond silos. 10E. Trove. Introducing Trove 7. Trove—the National Library's online discovery service—has had some work done and is even better! 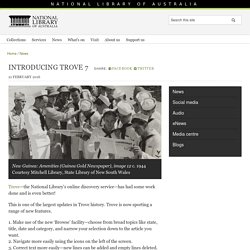 This is one of the largest updates in Trove history. Trove is now sporting a range of new features. 1. Make use of the new ‘Browse’ facility—choose from broad topics like state, title, date and category, and narrow your selection down to the article you want.2. Home. Trove Other National Library Treasures Chinchilla Jul 2013. Trove support zones. National Library of Australia Using Trove This zone explains how Trove works and gives answers to some common questions. 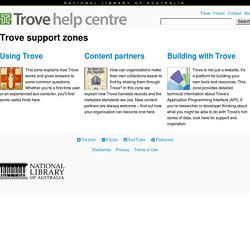 Whether you're a first-time user or an experienced text-corrector, you'll find some useful hints here. Content partners How can organisations make their own collections easier to find by sharing them through Trove? Using digitised newspapers FAQ. Can I copy the images and use them in Wikipedia, and how should I cite/credit them? 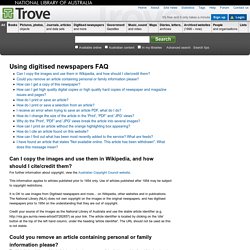 For further information about copyright, view the Australian Copyright Council website. This information applies to articles published prior to 1954 only. Use of articles published after 1954 may be subject to copyright restrictions. It is OK to use images from Digitised newspapers and more... on Wikipedia, other websites and in publications. Trove Content Inclusion Policy. Trove: Innovation in Access to Information in Australia. Trove. History[edit] Trove's origins can be seen in the development of earlier services such as the Australian Bibliographic Network.[6] It was originally known as the Single Business Discovery Service, a project that was launched in August 2008.[7] The intention was to create a single point of entry for the public to the various online discovery services developed by the library between 1997 and 2008 including Register of Australian Archives and Manuscripts, Picture Australia, Libraries Australia, Music Australia, Australia Dancing, PANDORA search service, ARROW Discovery Service and the Australian Newspapers Beta service.[7][8] The key features of the service were designed to create a faceted search system specifically for Australian content. 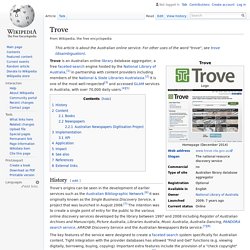 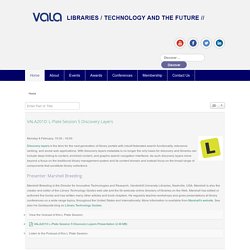 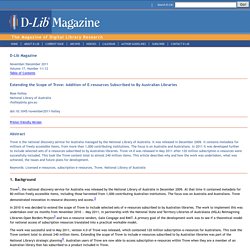