Features of Style help for composition

Popular music wiki. Popular music is music with wide appeal[1][2][3] that is typically distributed to large audiences through the music industry. 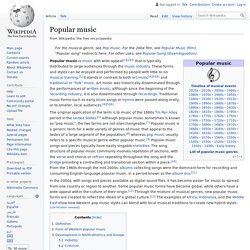 These forms and styles can be enjoyed and performed by people with little or no musical training.[1] It stands in contrast to both art music[4][5][6] and traditional or "folk" music. Art music was historically disseminated through the performances of written music, although since the beginning of the recording industry, it is also disseminated through recordings. Traditional music forms such as early blues songs or hymns were passed along orally, or to smaller, local audiences.[4][5][6] Characteristics of Pop by Lesly Calle on Prezi. Characteristics - American Country Music. Pop - Revision 1. Many British pop groups in the 1960s were heavily influenced by American blues and R&B. 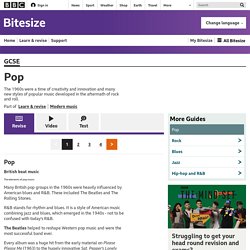 These included The Beatles and The Rolling Stones. R&B stands for rhythm and blues. It is a style of American music combining jazz and blues, which emerged in the 1940s - not to be confused with today's R&B. The Beatles helped to reshape Western pop music and were the most successful band ever. Every album was a huge hit from the early material on Please Please Me (1963) to the hugely innovative Sgt.

The Beatles, from left to right: George Harrison, John Lennon, Ringo Starr and Paul McCartney The Beatles helped to create a distinctly British sound which used: British (rather than American) accentsstandard song formsdistinctive chord sequences and vocal harmoniesrhythmic guitar worksimple melodiesclever lyrics George Martin was their imaginative producer. The Beatles had a huge influence and pop groups sprang up all over the UK, usually writing their own songs. Genres & Definitions. Genre Definitions as used in the KOOP Music Library These definitions were compiled to aid Music Library volunteers when writing their reviews and categorizing/labelling music. 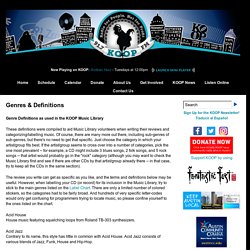 Of course, there are many more out there, including sub-genres of sub-genres, but there's no need to get that specific. Just choose the category in which your artist/group fits best. If the artist/group seems to cross over into a number of categories, pick the one most prevalent -- for example, a CD might include 3 blues songs, 2 folk songs, and 5 rock songs -- that artist would probably go in the "rock" category (although you may want to check the Music Library first and see if there are other CDs by that artist/group already there -- in that case, try to keep all the CDs in the same section).

The review you write can get as specific as you like, and the terms and definitions below may be useful. Acid House House music featuring squelching loops from Roland TB-303 synthesizers. Hip-hop and R&B - Revision 1. Rock - Revision 1. Jeff Buckley’s song Grace has several features that are commonly found in rock music such as four beats in a bar, the use of verse and chorus form and the instrumental line-up. 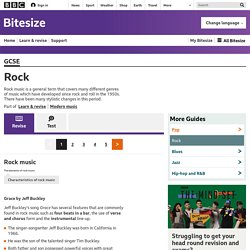 The singer-songwriter Jeff Buckley was born in California in 1966.He was the son of the talented singer Tim Buckley.Both father and son possessed powerful voices with great emotional depth.Tim Buckley died of a heroin overdose at the age of 29.Jeff Buckley died in a swimming accident at the age of 30.The song Grace is taken from the album with the same name.Grace (1994) was the only studio album Jeff Buckley completed.Jeff Buckley co-wrote the song Grace with the guitarist Gary Lucas.The song Grace is scored for two guitars, bass guitar, and drums.Jeff Buckley co-wrote the song Grace with the guitarist Gary Lucas. Grace could be described as a rock ballad. Country music. Country music often consists of ballads and dance tunes with generally simple forms, folk lyrics, and harmonies accompanied by mostly string instruments such as banjos, electric and acoustic guitars, steel guitars (such as pedal steels and dobros), and fiddles as well as harmonicas.[2][3][4] Blues modes have been used extensively throughout its recorded history.[5] The term country music is used today to describe many styles and subgenres. 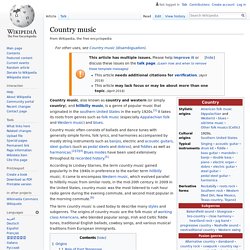 The origins of country music are the folk music of working class Americans, who blended popular songs, Irish and Celtic fiddle tunes, traditional English ballads, cowboy songs, and various musical traditions from European immigrants. Origins[edit] Immigrants to the southern Appalachian Mountains of eastern North America brought the music and instruments of Europe along with them for nearly 300 years. 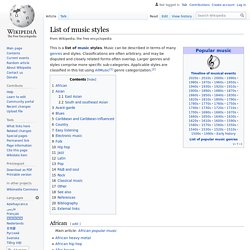