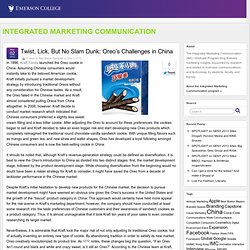 Assuming Chinese consumers would instantly take to the beloved American cookie, Kraft initially pursued a market development strategy by introducing traditional Oreos without any consideration for Chinese tastes. As a result, the Oreo failed in the Chinese market and Kraft almost considered pulling Oreos from China altogether. In 2006, however, Kraft decide to conduct market research which indicated that Chinese consumers preferred a slightly less sweet cream filling and a less bitter cookie. After adjusting the Oreo to account for these preferences, the cookies began to sell and Kraft decided to take an even bigger risk and start developing new Oreo products which completely reimagined the traditional round chocolate-vanilla sandwich cookie. Nevertheless, it is admirable that Kraft took the major risk of not only adjusting its traditional Oreo cookie, but of actually inventing an entirely new type of cookie. Oreo‘s Advertising & Communications Strategy: Is it effective?

How Kraft Foods made Oreo a global brand. Executive Summary: For most of its 100-year existence, Oreo was America's best loved cookie, but today it is a global brand. 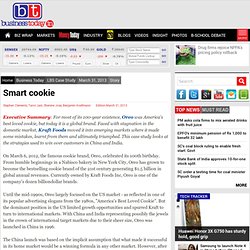 Faced with stagnation in the domestic market, Kraft Foods moved it into emerging markets where it made some mistakes, learnt from them and ultimately triumphed. This case study looks at the strategies used to win over customers in China and India. On March 6, 2012, the famous cookie brand, Oreo, celebrated its 100th birthday. From humble beginnings in a Nabisco bakery in New York City, Oreo has grown to become the bestselling cookie brand of the 21st century generating $1.5 billion in global annual revenues.

Currently owned by Kraft Foods Inc, Oreo is one of the company's dozen billiondollar brands. Oreo : un biscuit qui cache plus qu’un coeur crémeux. 5 Social Media Lessons to learn from @Oreo. Oreo is not only a sandwich cookie consisting of two chocolate disks with a cream filling in between but it’s a brand that really keeps you connected and attached. 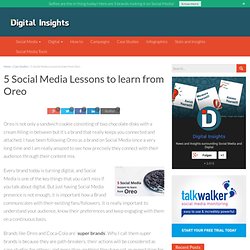 I have been following Oreo as a brand on Social Media since a very long time and I am really amazed to see how precisely they connect with their audience through their content mix. Every brand today is turning digital, and Social Media is one of the key things that you can’t miss if you talk about digital. But just having Social Media presence is not enough, it is important how a Brand communicates with their existing fans/followers. It is really important to understand your audience, know their preferences and keep engaging with them on a continuous basis. 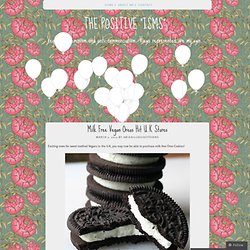 The popular treat formerly contained whey powder which is derived from milk. However some new packets of Oreos sold in U.K supermarkets and smaller retailers do not include this ingredient. Oreo : un biscuit qui cache plus qu’un coeur crémeux. Can Oreo win over British biscuit lovers? Oreo cookies are as much a part of the traditional American upbringing as Coca-Cola and hotdogs. 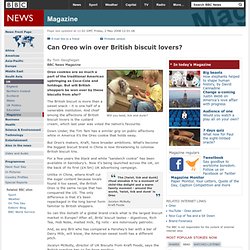 But will British shoppers be won over by these biscuits from afar? The British biscuit is more than a sweet snack - it is one half of a venerable institution. And chief among the affections of British biscuit lovers is the custard cream, which last year was voted the nation's favourite. Down Under, the Tim Tam has a similar grip on public affections while in America it's the Oreo cookie that holds sway. But Oreo's makers, Kraft, have broader ambitions. For a few years the black and white "sandwich cookie" has been available in Sainsbury's. Unlike in China, where Kraft cut the sugar content because locals found it too sweet, the British Oreo is the same recipe that has conquered the US. So can this Goliath of a global brand crack what is the largest biscuit market in Europe? Jocelyn McNulty, director of UK Biscuits from Kraft Foods, says the British reaction has so far been positive. Léchez un Oreo au lieu de vous battre ! La célèbre marque de biscuit a dévoilé cette semaine un nouveau spot TV en Angleterre. 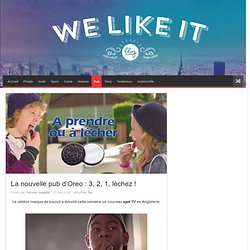 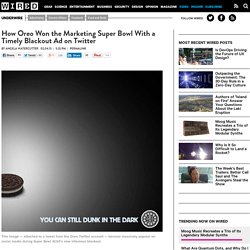 Now that watching sports is a two-screen – if not three-screen – experience, advertisers have to do more than just run commercials to get fans’ attention. They have to stay on their toes on Twitter, Facebook, and other social media channels to stay relevant – and during Sunday night’s Super Bowl, no brand pulled off more fancy footwork than Oreo. During the third quarter of Super Bowl XLVII when a power outage at the Superdome caused some of the lights to go out for 34 minutes, the sandwich cookie’s social media team jumped on the cultural moment, tweeting an ad that read “Power Out? How Oreo Cookies Adapted to the Chinese MarketKamigami. Oreo, the top-selling cookie in the U.S. market, were first introduced in 1912. 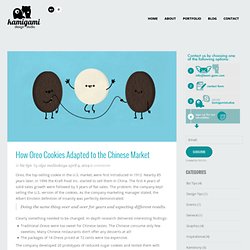 Nearby 85 years later, in 1996 the Kraft Food Inc. started to sell them in China. The first 4 years of solid sales growth were followed by 5 years of flat sales. The problem: the company kept selling the U.S. version of the cookies. As the company marketing manager stated, the Albert Einstein definition of insanity was perfectly demonstrated: Doing the same thing over and over for years and expecting different results. Des biscuits Oreo sur mesure. In the spotlight: Oreo's social media team. In his 1989 hit ‘Americanos’ ex-Frankie front-man Holly Johnson listed icons of US consumerism, singing: “Americanos, Blue Jeans and Chinos, Coke, Pepsi and Oreos”. 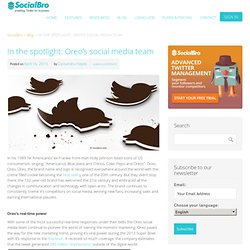 Oreo, Oreo, Oreo, the brand name and logo is recognised everywhere around the world with the creme filled cookie becoming the best selling one of the 20th century. But they didn’t stop there, the 102-year-old brand has welcomed the 21st century and embraced all the changes in communication and technology with open arms. How Oreo owns social media through Twitter, Instagram, Vine and Pinterest. Oreo was the brand with the highest increase of ‘buzz’ in 2012, with a 49% higher online chatter than in the previous year. 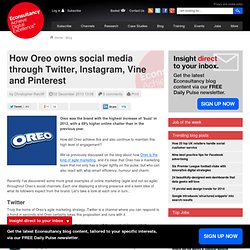 How did Oreo achieve this and also continue to maintain this high level of engagement? We’ve previously discussed on the blog about how Oreo is the king of agile marketing, and it's clear that Oreo has a marketing team that not only has a finger tightly on the pulse, but who can also react with whip-smart efficiency, humour and charm. Recently I’ve discovered some more great examples of online marketing (agile and not-so-agile) throughout Oreo’s social channels. Each one displaying a strong presence and a keen idea of what its followers expect from the brand. Global Marketing - Oreos (Kraft) Rectangle Oreos and cucumber gum, made in China for China. June 07, 2012|John Ruwitch | Reuters SUZHOU, China (Reuters) - There are no bad ideas inside Kraft Foods' biscuit research lab in China, according to director Maggie Wang.

Not even the chewing gum Oreo cookie that a colleague asked her to bite into one day. Instead of creamy white "stuff" in the centre, a glob of gum was sandwiched neatly between a pair of Oreo's iconic dark chocolate biscuits. "The taste was ok. The problem was that you could not swallow it," said Wang, a Kraft food scientist with two decades of experience in the biscuit industry. Investment may be powering the Chinese economy but experiments like the gum cookie - which, for better or worse, never made it to store shelves - are a reminder that consumption is rising sharply. Fortune cookie: selling Oreos in China — HSBC Global Connections. Kraft Foods had a problem—the Chinese weren’t buying Oreos. Introduced to the world’s most populous nation in 1996, the company’s most popular cookie saw only modest sales growth in the ensuing decade. By 2005, it controlled a mere 3% of the Chinese cookie market. For anyone raised in North America, this was a shocking fall for the King of All Cookies.

“When I worked in the U.S., it was the biggest mega-brand we had,” says Shawn Warren, a native of Kitchener, Ont., who arrived in 2005 as the company’s newly assigned vice-president of snacks for Asia-Pacific. Oreo's most effective Social Media marketing strategies. Marketing to China: Oreo's Chinese twist. Selling KFC’s egg tarts in China (Photo: EPA/Hu Sheng/Newscom) (Part 10 of the Business Without Borders series. An ongoing project chronicling the challenges, the opportunities, the strategies, and the models for Canada as it transforms from resource giant to global trading powerhouse.)

Kraft Foods had a problem—the Chinese weren’t buying Oreos. Introduced to the world’s most populous nation in 1996, the company’s most popular cookie saw only modest sales growth in the ensuing decade. By 2005, it controlled a mere 3% of the Chinese cookie market. For anyone raised in North America, this was a shocking fall for the King of All Cookies. More than 25 million Oreos are eaten every day in the U.S., but the company considered taking it off the shelves in the fastest-growing consumer market on earth. Oreo analysis. Oreos in China (Example of Product Adaptation Strategy in Global Marketing) Oreo's most effective Social Media marketing strategies.

Reasons for its sustainability in global markets and marketing strategies used in penetrating the Japanese markets have also been discussed. History of Oreos Cookies. The Success Secret Behind Oreo's Social Media Marketing Campaigns. Marketers at Oreo have been generating a lot of buzz about their cookies these days, and they're using social media to do it. The techniques they're using are extremely innovative, and they're not that difficult to replicate. Although this popular brand of cookie is known for its black-and-white striped appearance and its customers tendency to twist it apart or dunk it in milk, the brand is a social media powerhouse: 32M+ on Facebook 82K+ on Twitter 87K+ on Instagram 14M+ on YouTube Over the past few months, Oreo has hit more than a couple social media home runs. Their tweet during the Super Bowl, the 100-day “Daily Twist” Facebook campaign, the "Cookie Vs.