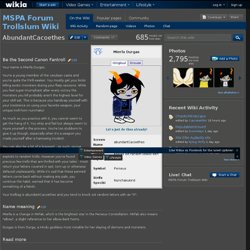 You're a young member of the cerulean caste and you're quite the thrill-seeker. You mostly get your kicks killing exotic monsters during your flarp sessions. While you feel super-triumphant after every victory the monsters you kill probably aren't the highest level for your skill set. As much as you practice with it, you cannot seem to get the hang of it. You can also be a bit of a braggart - as such, you've taken up crafting hand-written letters detailing your exploits to random trolls. Your trolltag is abundantCacoethes and you tend to knxck oxt randxm lettxrs with an "X".

Name meaning Mierfa is a change in Mirfak, which is the brightest star in the Perseus Constellation. FANTROLL REFERENCE LIST. HOW TO MAKE A GOOD FANTROLL: A SIMPLE GUIDE [Thunder Reign's post] Your name is VOUKALII CYETA, and everything is all about YOU YOU YOU. 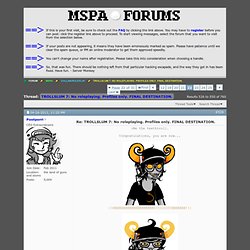 You have always craved ATTENTION, ever since you were a little grub. You are talented in MANY FIELDS, including SPORTS, COOKING, and especially MUSIC. And you know it. Of course, the only thing you really want is for people to appreciate your talent, but you usually just end up SCARING THEM OFF with your SELF-CENTERED ATTITUDE and OVERDRAMATICNESS. You really do try though. Well, not ONE person. You had been given the power to MAKE CLONES OF YOURSELF by your leader, Myestro. You have an exceptional singing voice, one almost powerful enough to break down walls with enough amping. Your trolltag is deviousOctaves, and *YOU* draw extra attentIon to *YOURSELF* at all tiMEs, sImIlarly makIng sure -everyone else- stays down. Fantroll Information Chart. How to Build a Basic Troll Sprite. References for all things homestuck. At no point have i said that vriska’s abuse of tavros is to be justified. it’s disgusting. but the issue is that vriska has depth and her own reasoning for why she does it. to vriska, she feels that she has to help her friends because they can’t do it themselves. she thinks she’s making tavros strong? 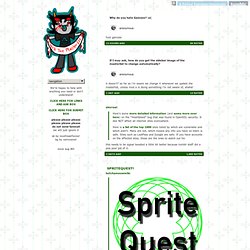 She lives with the burden of responsibility, she knows she can’t be weak or her lusus won’t survive: and then she won’t survive. but also she’s just.. antagonizing him too? Shes very complicated, it’s an insult to write her off as just a bitch. the thing is, you can take into account someones character development and rationale—even if you don’t agree with it. it’s like looking at explanations for why people do terrible things but not justifying it. vriska is someone who has everything ignored in favour of being this 2d bitch. her intentions were good but so terribly and horribly presented, making her so interesting? And to clarify once more, i am not saying vriska should be justified. 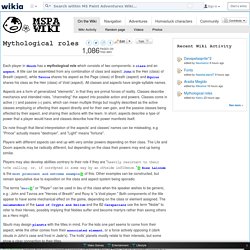 A title can be assembled from any combination of class and aspect: John is the Heir (class) of Breath (aspect), while Tavros shares his aspect as the Page (class) of Breath (aspect) and Equius shares his class as the Heir (class) of Void (aspect). All classes and aspects have single-syllable names. Aspects are a form of generalized "elements", in that they are primal forces of reality. Classes describe mechanics and intended roles, "channeling" the aspect into possible action and powers. Classes come in active (-) and passive (+) pairs, which can mean multiple things but roughly described as the active classes employing or affecting their aspect directly and for their own gain, and the passive classes being affected by their aspect, and sharing their actions with the team.

Do note though that literal interpretation of the aspects' and classes' names can be misleading, e.g. Class. Aspect. An aspect is an element assigned to a player of Sburb that dictates their role and powers. 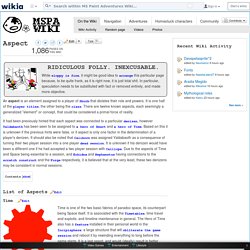 It is one half of the player titles, the other being the class. There are twelve known aspects, each seemingly a generalized "element" or concept, that could be considered a primal force of reality. It had been previously hinted that each aspect was connected to a particular denizen, however Yaldabaoth has been seen to be assigned to a hero of Heart and a hero of Time. Based on this it is unknown if the previous hints were false, or if aspect is only one factor in the determination of a player's denizen. It should also be noted that Caliborn was assigned Yaldabaoth as a consequence of turning their two player session into a one player dead session. List of Aspects Edit Time Edit Time is one of the two basic fabrics of paradox space, its counterpart being Space itself. According to Doc Scratch, there is a Hero of Time in every successful session.