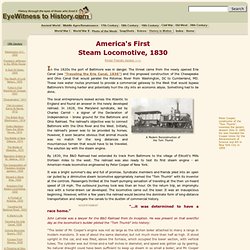 The threat came from the newly opened Erie Canal (see "Traveling the Erie Canal, 1836") and the proposed construction of the Chesapeake and Ohio Canal that would parallel the Potomac River from Washington, DC to Cumberland, MD. These new water routes promised to provide a commercial gateway to the West that would bypass Baltimore's thriving harbor and potentially hurl the city into an economic abyss. Something had to be done. S&D Models - 1/43 Scale Lamps - www.sandmodels.co.uk. Locoworks. Garden Railway Centres Ltd, uk garden railway suppliers, rare and exclusive model trains, scale model working steam engines, lgb train layouts. Garden Railway Specialists. San Diego. Nicor Home Solutions. Prehistoric man, the citizens of the Roman Empire and medieval travelers each enjoyed and benefited from personal mobility. 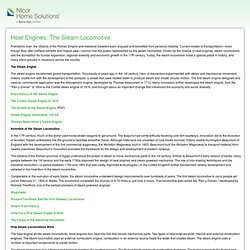 Current modes of transportation—even though they offer multiple benefits and inspire awe—cannot rival the power represented by the steam locomotive. Driven by the muscle of heat engines, steam locomotives laid the foundation for human expansion, regional diversity and economic growth in the 17th century. LightLine Homepage. eHow. I could never do that. Default. Roundhouse Online. My projects - summerlands-chuffer.co.uk. My name is Chris Bird and although I spend a huge amount of time on the design and marketing of the Summerlands Chuffer, I am a garden railway enthusiast, first and foremost. 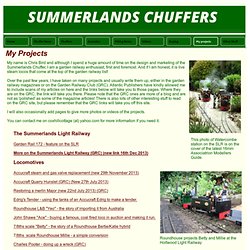 And if I am honest, it is live steam locos that come at the top of the garden railway list! Over the past few years, I have taken on many projects and usually write them up, either in the garden railway magazines or on the Garden Railway Club (GRC). Atlantic Publishers have kindly allowed me to include scans of my articles on here and the links below will take you to those pages. Where they are on the GRC, the link will take you there. Please note that the GRC ones are more of a blog and are not as 'polished' as some of the magazine articles! I will also occasionally add pages to give more photos or videos of the projects. You can contact me on coxhillcottage (at) yahoo.com for more information if you need it. Coaches. What's new in small-scale live steam. Locomotive Gallery. Prototype information The loco is based on the mills or tramroad locomotives built for Dinorwic quarry in north Wales by Hunslet. 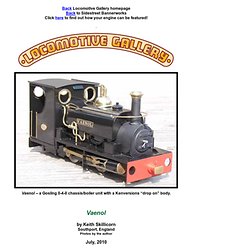 They where the largest engines to work there. The first of the pair of locomotives was named Vaenol, built in 1898. A sister locomotive, called Port Dinorwic, was purchased three years later. Both names where changed after a few years service. Vaenol became Gerry M and Port Dinorwic became Cackler. Background to the model Robin Gosling built these chassis/boiler units in the early 1980s. This particular one originally belonged to my good friend Frank Howell, who had it from new. Last year I had the good fortune to meet Ken Best of Kenversions fame (he used to build drop on bodies for Mamods in the 1980s). 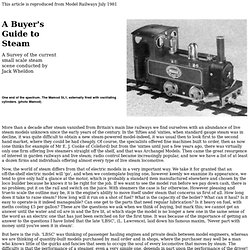 The Mamod SL1, externally fired with oscillating cylinders. (photo Mamod) Roundhouse Charles Pooter - Garden Railway Club. Before stripping the loco I decided to sort the wicks on the burner and give it another test run. 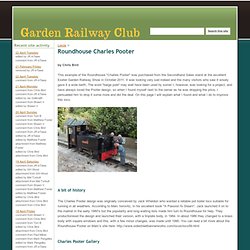 Once again it performed reasonably, but it struggled to maintain more than 20psi and there was clearly steam blowing by either the pistons or the valves. Then it was down to business. Four bolts held the body on (well three really as one was missing). Technical Information. 7/8N2 (USA) 7/8":1 foot scale (1:13.7) running on 45mm gauge track. 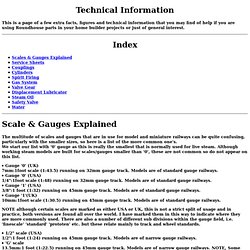 Models are of narrow gauge railways and represent 2 foot gauge. Garden railway scales and gauges A little extra information is added for what are generally termed the Garden railway scales as there are several which are normally used together and can cause confusion. Although any railway laid round a garden can be called a garden railway, today the term is normally applied to Gauge 1, 'G' scale, SM32 and SM45. 'G' scale, SM32 and SM45 are normally grouped together as size compatible, despite the scales being slightly different. Though we have two different gauges, 32 and 45mm, all three represent narrow gauge models and have similar overall sizes of locomotives and stock. How Stuff Works. Inventors were working on designs for steam-powered cars even as the first steam pumps were fine-tuned in the late 1600s. 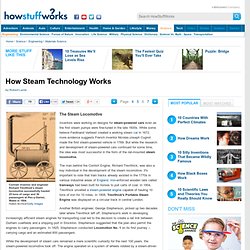 While some believe Ferdinand Verbiest created a working steam car in 1672, more evidence suggests French inventor Nicolas-Joseph Cugnot made the first steam-powered vehicle in 1769. But while the research and development of steam-powered cars continued for some time, the idea was most successful in the form of the rail-mounted steam locomotive. The man behind the Cornish Engine, Richard Trevithick, was also a key individual in the development of the steam locomotive.

It's important to note that train tracks already existed in the 1770s in various industrial areas of England. Iron-enforced wooden rails called tramways had been built for horses to pull carts of coal. Live steam model locomotives. This is a freelance model of a typical narrow gauge locomtive as used in Wales on gauge 0 or 1. 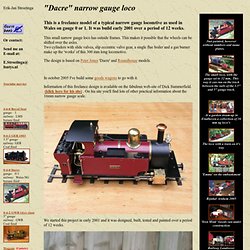 It was build early 2001 over a period of 12 weeks. This small narrow gauge loco has outside frames. Home-made "Dacre" Model boilermaking. Steam Engine Plans 3. Page 3 of the popular John-Tom Steam Engine Plans for Free Model Engine Downloads by John Tomlinson - Please click on the links to download the relevant files Please Contact Me if you have any questions or if you would like to Share you own plans on this page - full credit and links to relevant websites will be given. 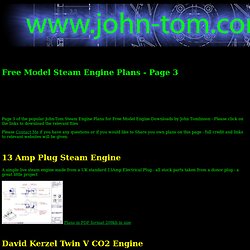 A simple live steam engine made from a UK standard 13Amp Electrical Plug - all stock parts taken from a donor plug - a great little project Plans in PDF format 209kb in size Plans and instructions with build photographs for a mini 2V CO2 engine. Building Brazil - Contents page. Modelling the Kerr-Stuart Brazil Class 0-4-2ST locomotive in 16mm scale. - Keith Bucklitch List of Contents of the Brazil construction pages. (NB. This list is arranged in alphabetic order, and NOT the order of construction. The notes have links to the next page in the construction sequence.) Introduction. Steammodelloco16mm : 16mm NG steam loco builder. This group will offer help and support to builders of NG steam engines. It is possible it may extend to a wider range of loco scales eg. 3.5 inch to 7.25 inch as the principals are the same.

A picture library will be posted of construction and development issues related to the building of them. Loco's presently covered include Kerr Stuart Brazil , Hunslet Charles and Bagnall Dennis to Keith Bucklitch's design. A dewinton called Idris by Dave Watkins. Gentoo's Journals - all about a Station Road Steam Stafford model steam locomotive. Small scale live steam frequently asked questions. So-called "small scale" live steam is actually on the large end of the usual model railroading spectrum, though most live steam equipment runs on much wider track (.75" scale or larger). There are quite a few different sizes and scales which fall into this category. Live steamers are easy to find in 1 gauge (45mm or "G" gauge), and in 0 gauge (32mm). In the US, most live steamers are in 1:22.5 or 1:32 scale, running or 1 gauge track. The correct US narrow gauge scale, 1:20.3, has become widely accepted in live steam circles more quickly than among electric train buyers.

His ingenuity and ability to solve problems no matter how impossible they seemed never made him into a rich man, but his undeniable technical advances enabled him to become part of history that will always remain remembered. Richard Trevithick was born in 1771, in the coal lands of Carn Brea between Camborne and Redruth in Cornwall. Surrounded by mines, and educated from young days to work with his father on water pump engines, he soon formulated the vision of improving efficiency of mining and transporting precious coal that was powering Britain’s vast industry.

History Learning Site. "en-gb"> transport Changes in transport Roads : For longer than people could remember, our roads were nothing more than dirt tracks that turned to mud in the winter and baked rock hard in the summer. Either way, movement along these tracks was difficult and at certain times of the year, practically impossible. By law, every parish had to look after the 'roads' that ran in it.