How To Stream Oculus Quest 2 On Twitch, YouTube, Or Facebook. Update: 10/15/20: We’ve updated this guide with references to the Oculus Quest 2 and amended the sections that mention ScrCpy to reflect that it’s now included as a feature in SideQuest. 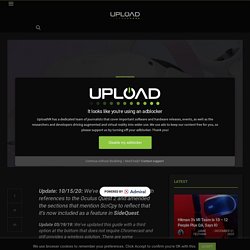 Update 05/19/19: We’ve updated this guide with a third option at the bottom that does not require Chromecast and still provides a wireless solution. There are some drawbacks, but it’s a good overall solution. We’ve also updated the text to reflect a third option. Main Article: The Oculus Quest is an impressive standalone VR headset that lets you wirelessly enter games from anywhere with full 6DOF positional tracking. And now, the platform is better than ever with the release of the Oculus Quest 2. Thankfully Oculus included some options, but it isn’t quite as flexible as we would have liked. Don’t worry — we’ve got you covered. So, here’s everything you need to stream Oculus Quest to Twitch, YouTube, Facebook, and any other streaming platform of your choice. Wired Quest / Quest 2 Streaming: What You Need. 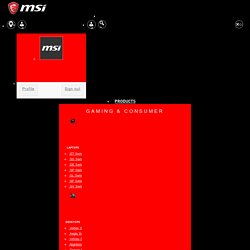 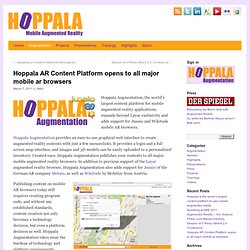 Hoppala Augmentation provides an easy-to-use graphical web interface to create augmented reality contents with just a few mouseclicks. It provides a login and a full screen map interface, and images and 3D models can be easily uploaded to a personalized inventory. Created once, Hoppala Augmentation publishes your contents to all major mobile augmented reality browsers. In addition to previous support of the Layar augmented reality browser, Hoppala Augmentation also adds support for Junaio of the German AR company Metaio, as well as Wikitude by Mobilizy from Austria. Publishing content on mobile AR browsers today still requires creating program code, and without any established standards, content creation not only becomes a technology decision, but even a platform decision as well.

Download FLARToolKit 2.5.1 - This is a Flash port of the augmented reality graphics library ARToolKit. FlarToolkit made easy : SimplARSeb Lee-Delisle. As cool as bell-bottom pants according to Keith Peters! Which is pretty damn cool. And it can be really fiddly setting up the FLARToolkit, so I’ve finally released some of my AR code. Just in time for it to go out of fashion. It uses the Alchemy branch of the FLARToolkit and includes everything you need to get up and running. It also has a very optimised automatic threshold adjustment system that takes virtually no extra processor time. Here’s a quick intro : It’s easy to use, there’s just one class. Check out the screencast below to see how to use a custom marker, handle when the pattern is lost and found, and load a 3D model in.

You can check out the project from my googlecode repository at : There area couple of extra things I’d like to add to the code, at the moment the size is fixed at 640×480 and the image is not mirrored; both things I would like to fix in the future. I’d like to thank thesven.com for his FLARToolkit Alchemy code that saved me masses of time! Downloads - XP Films. Download. ARToolKit Marker Generator Online released! « flash.tarotaro.org.blog. Flash sites Tarotarogu. ARToolKit Marker Generator Online released! « flash.tarotaro.org.blog. Welcome to ARToolworks. Plug Into the Smart Grid. Augmented Reality Technology, 3D Interactive Toyota iQ.