Handy vampire bloodline tracks all your favorite bloodsuckers. Severen is just too awesome for the poster. 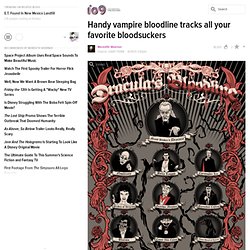 I noticed this too. Then I realized that Near Dark was released in 1987, same as Lost Boys. Seeing as how they only have one entry per year on the chart, only the most prominent got up there. While Near Dark added a whole new level of brutality to vampire movies, Lost Boys managed to make them [the vamps] cool and modern. They did it with style, and occasional angsty brooding. 1987 had more than its fair share of vampire movies. 1987 also saw the release of "Monster Squad" & "My Best Friend is a Vampire" (`88 in US). SExpand. Brian Lumley.com Necroscope Series. Harry Keogh. 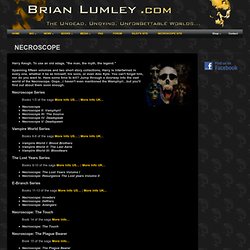 When you think of the physical appearance of a vampire, what do you see? 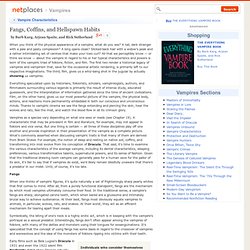 A tall, dark stranger with a pale and pasty complexion? A long opera cloak? Slicked-back hair with a widow's peak and a rather intimidating set of canines that make your toes curl? All that we perceptibly know — or think we know — about the vampire in regard to his or her typical characteristics and powers is born of the vampiric triad of folklore, fiction, and film. The first two render a historical legacy of vampires and vampirism that, save for the occasional artistic rendering, is primarily left to our respective imaginations. Everything speculated upon by historians, folklorists, scholars, vampirologists, authors, and filmmakers surrounding various legends is primarily the result of intense study, educated guesswork, and the interpretation of information gathered since the time of ancient civilizations.

Vampires as a species vary depending on what one sees or reads (see Chapter 19). Fangs Fingernails. Origins of Belief in Vampires. Vampires Among Us and Real Bloodsuckers One modern variation on the vampire legend is the "psychic vampire. 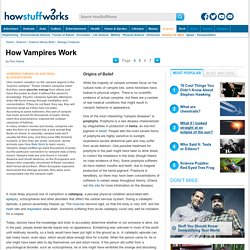 " These modern vampires claim that they crave psychic energy from others and have the power to drain it without the person's knowledge. Psychic vampires typically attempt to drain life-force energy through meditation and concentration. If they do not feed, they say, they will become weak as if they had not eaten. According to some believers, this sort of vampire has been around for thousands of years. In many modern movies and books, vampires can take the form of a vampire bat, a real animal that feeds on blood. Vampiric shape-shifters go back thousands of years, but the particular connection to vampire bats is fairly recent. The History of Vampires - The Untold Story. Until recently, we didn't know a lot about the history of vampires. 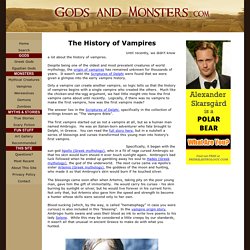 Despite being one of the oldest and most prevalent creatures of world mythology, the origin of vampires has remained unknown for thousands of years. It wasn't until the Scriptures of Delphi were found that we were given a glimpse into the early vampire history. Only a vampire can create another vampire, so logic tells us that the history of vampires begins with a single vampire who created the others. Much like the chicken-and-the-egg argument, we had little insight into how the first vampire came about until recently. Logically, if there was no vampire to make the first vampire, how was the first vampire made? The answer lies in the Scriptures of Delphi, specifically in the collection of writings known as "The Vampire Bible".

The first vampire started out as not a vampire at all, but as a human man named Ambrogio. Ambrogio later moved back to Italy, now as a full-fledged vampire.