Thales, the First Scientist. In the book The Day the Universe Changed, author James Burke writes about an ancient Greek man named Thales, who lived on the west coast of modern day Turkey, around 624-546 BC. 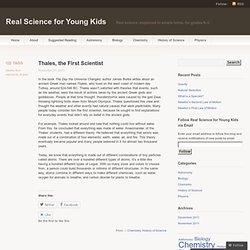 Thales wasn’t satisfied with theories that events, such as the weather, were the result of actions taken by the ancient Greek gods and goddesses. People at that time thought thunderstorms were caused by the god Zeus throwing lightning bolts down from Mount Olympus. Thales questioned this view and thought the weather and other events had natural causes that were predictable. Many people today consider him the first scientist, because he sought to find explanations for everyday events that didn’t rely on belief in the ancient gods. For example, Thales looked around and saw that nothing could live without water. Today, we know that everything is made out of different combinations of tiny particles called atoms. 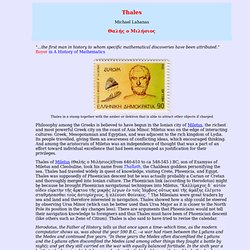 Boyer in A History of Mathematics Thales in a stamp together with the amber or ilektron that is able to attract other objects if charged Philosophy among the Greeks is believed to have begun in the Ionian city of Miletus, the richest and most powerful Greek city on the coast of Asia Minor. Miletus was on the edge of interacting cultures: Greek, Mesopotamian and Egyptian, and was adjacent to the rich kingdom of Lydia. Its people travelled, giving them an awareness of conflicting ideas, which encouraged thinking. Thales of Miletus (Θαλής ο Μιλήσιος)(from 640-610 to ca 548-545 ) BC, son of Examyas of Miletus and Cleobuline, took his name from Thallath, the Chaldean goddess personifying the sea. Herodotus, the Father of History, tells us that once upon a time--which time, as the modern computator shows us, was about the year 590 B.C. Socrates. Aristotle writes about Thales: and F. 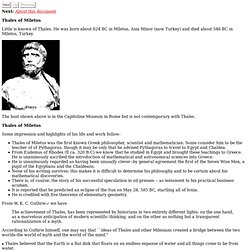 He was born about 624 BC in Miletus, Asia Minor (now Turkey) and died about 546 BC in Miletos, Turkey The bust shown above is in the Capitoline Museum in Rome but is not contemporary with Thales. Some impression and highlights of his life and work follow: Thales of Miletus. The Greek philosopher, Thales was born around 624BC, the son of Examyes and Cleobuline. 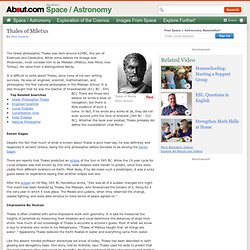 While some believe his lineage was Phoenician, most consider him to be Milesian (Miletus, Asia Minor, now Turkey). He came from a distinguished family. It is difficult to write about Thales, since none of his own writing survives. He was an engineer, scientist, mathematician, and philosopher, the first natural philosopher in the Milesian School. It is also thought that he was the teacher of Anaximander (611 BC - 545 BC). Seven Sages Despite the fact that much of what is known about thalse is pure hear-say, he was definitely well respected in ancient Greece, being the only philosopher before Socrates to be among the Seven Sages.

There are reports that Thales predicted an eclipse of the Sun in 585 BC. After the eclipse on 28 May, 585 BC Herodotus wrote, "Day was all of a sudden changed into night. Impressive Bu Human Thales is often credited with some impressive work with geometry. Thales Biography - Thales Childhood. Thales - Greek Philosopher. Thales of Miletus (ca. 635 BC-543 BC), also known as Thales the Milesian, was a pre-Socratic Greek philosopher and one of the Seven Sages of Greece. 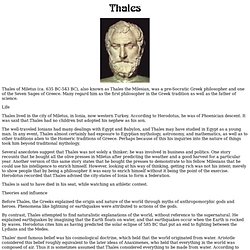 Many regard him as the first philosopher in the Greek tradition as well as the father of science. Life Thales lived in the city of Miletus, in Ionia, now western Turkey. According to Herodotus, he was of Phoenician descent. It was said that Thales had no children but adopted his nephew as his son. The well-traveled Ionians had many dealings with Egypt and Babylon, and Thales may have studied in Egypt as a young man. Several anecdotes suggest that Thales was not solely a thinker; he was involved in business and politics. Thales is said to have died in his seat, while watching an athletic contest. Theories and influence. Thales.