Henry Matisse Biography - Art History. Written by: Anitra Redlefsen [Anitra is a teaching artist - www.artisjoy.com] “To find joy in the sky, the trees, the flowers… There are always flowers for those who want to see them.” - Matisse Henri Matisse was born December 31, 1869 in northern France. 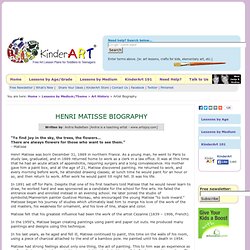 As a young man, he went to Paris to study law, graduated, and in 1889 returned home to work as a clerk in a law office. It was at this time that he had an acute attack of appendicitis, requiring surgery and a long convalescence. His mother gave him a paint box, and at the age of 21, Matisse discovered painting. In 1891 set off for Paris. Matisse felt that his greatest influence had been the work of the artist Cezanne (1839 – 1906, French). In the 1950‘s, Matisse began creating paintings using paint and paper cut outs.

In his last years, as he aged and fell ill, Matisse continued to paint, this time on the walls of his room, using a piece of charcoal attached to the end of a bamboo pole. Art for Kids: Paper Cut-out Artwork Inspired by Matisse {Kids Get Arty} Lucy and I are so excited to take part in our first Kids Get Arty Challenge! 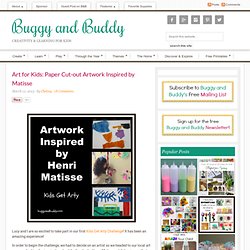 It has been an amazing experience! In order to begin the challenge, we had to decide on an artist so we headed to our local art museum looking for inspiration. Luckily, they had a Henry Matisse exhibit going on that Lucy was immediately drawn to! Outside the museum We walked around the large gallery taking photographs and commenting on each piece of artwork with Lucy unable to resist making a few echoing sounds in the large room. Sketching Lucy began by drawing shapes from her favorite pieces. Searching for my sketch inspiration… Later, we headed downstairs and were pleasantly surprised to find a very inviting area set up for making art from paper cut outs like Matisse did. Cutting some shapes She had us end with creating a tear art paper flower she had seen in one of the books nearby~ (You do the center, Mommy, and I’ll do the petals.)

Adding our flower to the wall Footage of Henri Matisse Making a Paper Cut Out 1. Henri Matisse: "Painting with Scissors" Over here at Modern Art 4 Kids, we are no strangers to Henri Matisse, the most beloved Fauve of all! 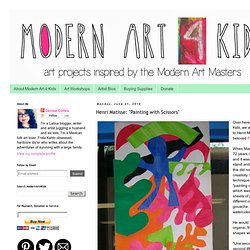 When Matisse was nearly 72 years old, he became ill and it was difficult for him to stand and paint. However, this did not damper his creativity. He began a new technique, which he called, "painting with scissors", which was painting large sheets of paper with different colors using gouache, an opaque watercolor. He would then cut beautiful, organic, free-flowing shapes with scissors. "Une seconde vie”, a second life, was what Matisse called the last fourteen years of his life, working on his collages, or cut outs. Here is where it gets good. He used several assistants to be his "arms and legs", moving and arranging his cut outs along the walls of his studio. Move it a little to the right.To the left! Biography: Henri Matisse Art for Kids. Biography >> Art History Occupation: Artist, Painter Born: December 31, 1869 in Le Cateau-Cambrésis, France Died: November 3, 1954 in Nice, France Famous works: The Dinner Table, Woman with a Hat, The Desert: Harmony in Red, Le Rifain assis, The Red Studio Style/Period: Fauvism, Modern Art Biography: Where did Henri Matisse grow up? 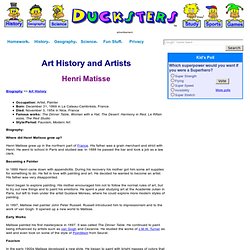 Henri Matisse grew up in the northern part of France. His father was a grain merchant and strict with Henri. He went to school in Paris and studied law. In 1888 he passed the bar and took a job as a law clerk. Activities - Baltimore Museum of Art. Matisse for Kids Online Activity Meet Raoudi, artist Henri Matisse's perky schnauzer, in Matisse for Kids, a delightful on-line exploration of the beloved 20th century master's bold, bright paintings. 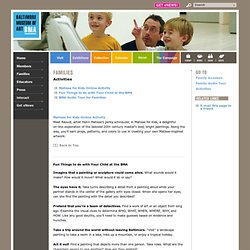 Along the way, you'll earn props, patterns, and colors to use in creating your own Matisse-inspired artwork. Fun Things to do with Your Child at the BMA Imagine that a painting or sculpture could come alive. What sounds would it make? The eyes have it. Pretend that you’re a team of detectives. Take a trip around the world without leaving Baltimore. Act it out! Tell a tale. Fun for the very young. You’ll enjoy the Museum more if you look at just a few objects, or one special exhibition. For more information about the BMA’s programs for children and families, call 443-573-1818.

BMA Audio Tour for Families FREE The BMA is one of the only museum audio tours with a dog leading the way! F_conekids.swf (Oggetto application/x-shockwave-flash) Henri Matisse - ARTISTS - FREE Presentations in PowerPoint format, Free Interactives & Games.