The 13 best Google Chrome life hacks. Flickr/Isaac Bowen Since it debuted in 2008, Google Chrome has quickly risen to be the most popular web browser in the world, beating out Firefox and Internet Explorer. 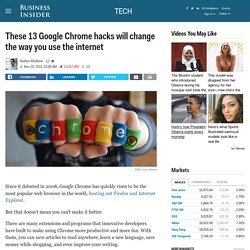 But that doesn't mean you can't make it better. There are many extensions and programs that innovative developers have built to make using Chrome more productive and more fun. With them, you can save articles to read anywhere, learn a new language, save money while shopping, and even improve your writing. The 60 Second Blog Content Plan — Digital Marketer. How to Name A Facebook Heir or "Legacy Contact" Facebook has introduced a new feature allowing users to designate a "legacy contact" who will serve as their online personal representative after they die, with the ability to manage their account and take a limited number of actions. 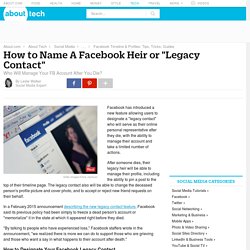 After someone dies, their legacy heir will be able to manage their profile, including the ability to pin a post to the top of their timeline page. The legacy contact also will be able to change the deceased person's profile picture and cover photo, and to accept or reject new friend requests on their behalf. In a February 2015 announcement describing the new legacy contact feature, Facebook said its previous policy had been simply to freeze a dead person's account or "memorialize" it in the state at which it appeared right before they died. 75 of the Greatest Life Hacks - Keyboard Cleaner. She Pours Egg Into The Waffle Iron. Seconds Later? I’m Never Cooking Again. : HotMomsClub. 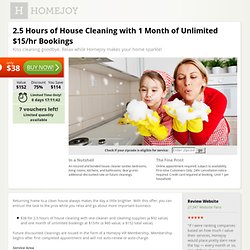 Versal. The best project management tools for freelancers. Tired of keeping track of everything in spreadsheets, post-it notes, or your inbox? 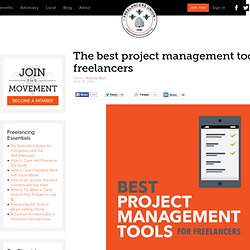 Project management software can help you save time, collaborate effectively, and prevent important to-do’s from slipping through the cracks. Here’s a run-down of some project management programs that we recommend. In addition to running on a standard desktop, each of these tools offers iOS and Android apps. Domain name registrar and VPS cloud hosting. Typeform. Managing multiple email accounts. Do you have a personal email account and an Oxy email account? 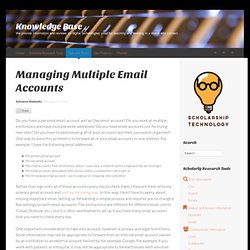 Do you work at multiple institutions and have multiple work addresses? Do you have email accounts just for trying new sites? Do you have trouble keeping all of your accounts and their passwords organized? One way to solve this problem is to forward all of your email accounts to one address. For example, I have the following email addresses: Winning the Battle Against Your Email Subscriptions. Take control of your Inbox 1. 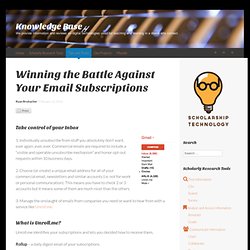 Individually unsubscribe from stuff you absolutely don’t want, ever again, ever, ever. Winning the battle against your email subscriptions. Domain name registrar and VPS cloud hosting. Streamlining your Gmail Inbox. Sign in. See All The Companies That Are Tracking You On Facebook — And Block Them. Website settings - Chrome Help. Permissions When you visit a website, you can easily adjust cookie and permissions settings related to that site in Google Chrome. 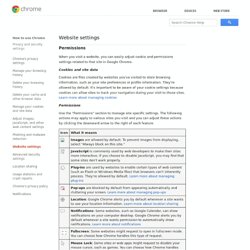 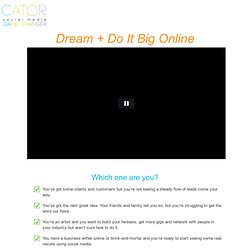 You’ve got some clients and customers but you’re not seeing a steady flow of leads come your way.You’ve got the next great idea. Your friends and family tell you so, but you’re struggling to get the word out there.You’re an artist and you want to build your fanbase, get more gigs and network with people in your industry but aren’t sure how to do it.You have a business either online or brick-and-mortar and you’re ready to start seeing some real results using social media. If you can identify with any of these, well you’re in the right place. - 2013 Gift Guide. Surf Better With These 9 Killer Google Chrome Extensions. Big Pharma’s focus on blockbuster cancer drugs squeezes out cheaper treatments. 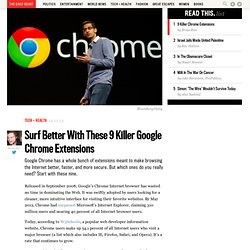 The result, one researcher says: ‘If we’re winning the war on cancer, we’re not winning that fast.’ Michael Retsky awoke from surgery to bad news. The tumor in his colon had spread to four of his lymph nodes and penetrated the bowel wall. When Retsky showed the pathology report to William Hrushesky, his treating oncologist, the doctor exclaimed, “Mamma mia.”

“Michael had a mean-looking cancer,” Hrushesky remembers. Retsky didn’t need anyone to tell him his prognosis. In the absence of chemotherapy, there was an 80 percent chance of relapse. Like many cancer patients, Retsky didn’t much like the odds. Seventeen years later and cancer-free, Retsky cannot be entirely sure the treatment cured him, but he believes it likely did. Take Michelle Holmes, an associate professor of medicine at Harvard Medical School. The newer drugs have in some cases shown dramatic life-extending results for patients. 10 Gmail gadgets to try. Posted by Martin Gruau, Consumer Operations There is a powerful but little known Gmail feature that lives in Labs called “Add any gadget by URL.” 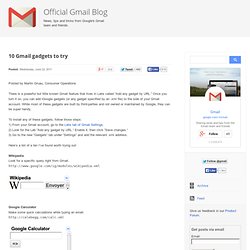 Once you turn it on, you can add iGoogle gadgets (or any gadget specified by an .xml file) to the side of your Gmail account. While most of these gadgets are built by third-parties and not owned or maintained by Google, they can be super handy. To install any of these gadgets, follow those steps: 1) From your Gmail account, go to the Labs tab of Gmail Settings. 2) Look for the Lab “Add any gadget by URL.”

Enable it, then click “Save changes.” 3) Go to the new “Gadgets” tab under “Settings” and add the relevant .xml address. Here’s a list of a ten I’ve found worth trying out: Wikipedia Look for a specific query right from Gmail. Google Calculator Make some quick calculations while typing an email. Office Supplies - Work Happy with Colorful Products + Designs for Your Home, Office, and Back to School. 10 Gmail gadgets to try. 99 Life Hacks That Could Make Your Life Easier.

The Beginner's Guide to the Hashtag. If you’re a social media novice, hashtags — those short links preceded by the pound sign (#) — may seem confusing and unnecessary. But they are integral to the way we communicate online, and it’s important to know how to use them (even though some people, like Jimmy Fallon and Justin Timberlake, are not the biggest fans). Plus, they can be a lot of fun. On Twitter, the pound sign (or hash) turns any word or group of words that directly follow it into a searchable link.

Ways to clean up mac. This Amazing Accessory Turns Your iPad Into a 3-D Scanner. The Structure Sensor is a new 3-D Scanning accessory for iPads created by Occipital, makers of the Red Laser bar code scanner and 360 Panorama app.Photo: Occipital Inspired by the Microsoft Kinect, the Structure Sensor raised over $250,000 dollars on its first day on Kickstarter.

We explored how to lock down your Facebook account's privacy settings, for both your public profile and under the hood. Follow this simple step-by-step process to make sure you're not sharing anything outside your comfort zone. Taking some time to lock down your Facebook privacy settings is a good idea. When Facebook makes future changes, it will be easier to keep on top of what's new. Take a look below for our privacy walkthrough. Download MacKeeper. System Requirements: Mac OS X 10.5 or later Your download of a fully functional demo version of MacKeeper will start automatically. If it doesn't happen, CLICK HERE. Blackmagic Design Announces New Cameras: ATEM 4K and More. Blackmagic Production Camera 4K The Blackmagic Production Camera 4K will have an EF-compatible lens mount and will retain the same chassis—and thus, the same size and shape of its EF mount predecessor.