Mom Writes Book, ‘Bad Hair Does Not Exist!’ For Daughters. An article by Maya Chung for NBC News. 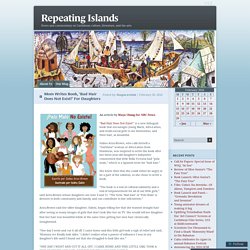 “Bad Hair Does Not Exist!” Is a new bilingual book that encourages young Black, Afro-Latino, and multi-racial girls to see themselves, and their hair, as beautiful. Sulma Arzu-Brown, who calls herself a “Garifuna” woman or Afro-Latino from Honduras, was inspired to write the book after her three-year-old daughter’s babysitter commented that little Bella Victoria had “pelo malo,” which is a Spanish term for “bad hair.” She knew then that she could either be angry or be a part of the solution, so she chose to write a book. “The book is a tool of cultural solidarity and a tool of empowerment for all of our little girls,” said Arzu-Brown whose daughters are now 4 and 11.

Did You Know California Was Named After A Native Black Woman? Was California was named after, Queen Califia, a Black Amazon warrior Queen? 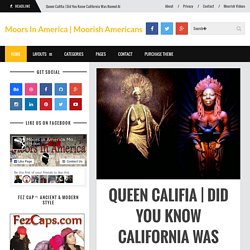 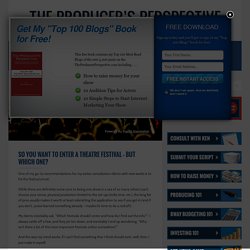 One of my go-to recommendations for my writer consultation clients with new works is to hit the festival circuit. While there are definitely some cons to being one show in a sea of so many others (can’t choose your venue, physical production limited to the set-up/strike time, etc.), the long list of pros usually makes it worth at least submitting the application to see if you get in (and if you don’t, you’ve learned something already – maybe it’s time to do a redraft).

My clients inevitably ask, “Which festivals should I enter and how do I find out the info?” I always rattle off a few, and they jot ’em down, and inevitably I end up wondering, “Why isn’t there a list of the most important festivals online somewhere?”

How to Book Your One-Person Show - Thriving Artist Circle. Many thriving artists enjoy taking matters into their own hands and creating their own one-person show. 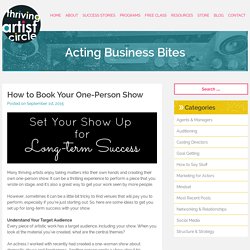 It can be a thrilling experience to perform a piece that you wrote on stage, and it’s also a great way to get your work seen by more people. However, sometimes it can be a little bit tricky to find venues that will pay you to perform, especially if you’re just starting out. So, here are some ideas to get you set up for long-term success with your show. Understand Your Target Audience Every piece of artistic work has a target audience, including your show. When you look at the material you’ve created, what are the central themes? 5 Stages of Loc Hair. Writing Tips/Summer Classes/Gorgeous Stories & Shows. What Angela Davis Thinks Of Her Face On T-Shirts. Son of Semele Ensemble. Festival Dates: July 1 – 19, 2015 Application Deadline: April 1, 2015 Solo Creation Festival (SCF) exists to support the creation of new and innovative solo works in all stages of development. 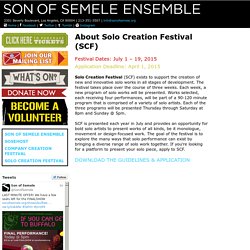 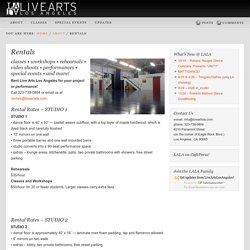 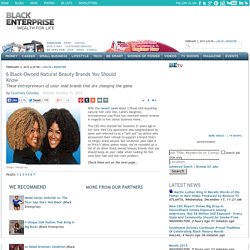 The CEO who started her business 21 years ago in her New York City apartment was congratulated by some and referred to as a “sell out” by others who announced their refusal to support a brand that’s no longer black owned. The changing business of black hair. - by Antonia The Black haircare industry is grossly underestimated, and knowingly so. 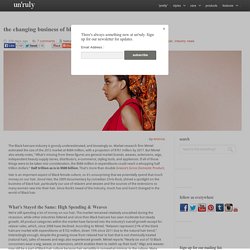 Market research firm Mintel estimated the size of the 2012 market at $684 million, with a projection of $761 million by 2017. But Mintel also wisely notes, “What’s missing from these figures are general market brands, weaves, extensions, wigs, independent beauty supply stores, distributors, e-commerce, styling tools, and appliances. If all of those things were to be taken into consideration, the $684 million in expenditures could reach a whopping half trillion dollars.” Half trillion as is in $500 billion. 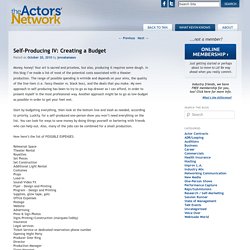 Your art is sacred and priceless, but alas, producing it requires some dough. In this blog I’ve made a list of most of the potential costs associated with a theater production. The range of possible spending is wiiiiide and depends on your aims, the quality of the line item (i.e. fancy theater vs. black box), and the deals that you make. My own approach in self-producing has been to try to go as top-drawer as I can afford, in order to present myself in the most professional way. Another approach might be to go as low-budget as possible in order to get your feet wet. 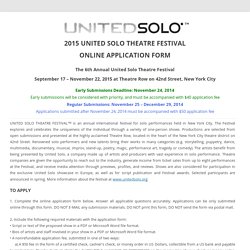 The Festival explores and celebrates the uniqueness of the individual through a variety of one-person shows. Productions are selected from open submissions and presented at the highly acclaimed Theatre Row, located in the heart of the New York City theatre district on 42nd Street. Creating Your One-Man or One-Woman Show, Part One - acting advice. Creating Your One-Man or One-Woman Show, Part One by Victoria Larimore Let's be real – producing a one-man or one-woman show is quite a big undertaking and requires lots of plain old hard work. But the payoff can be huge – including launching the careers of actors from John Leguizamo (Moulin Rouge, Summer of Sam, etc.) to Eric Bogosian (Talk Radio, “Law & Order: Criminal Intent,” etc.) to my old pal Claudia Shear (two Tony nominations for “Dirty Blonde”) and revitalizing the career of the likes of Lily Tomlin (“Intelligent Signs of Life in the Universe” on Broadway), among others.

Web Series Pitch Sheet: 'White Collar Brawler' Supernaturaltwo. Supernaturaltwo. The Misadventures of AWKWARD Black Girl by Awkward Black Girl. Why ABG exists: Television today has a very limited scope and range in its depictions of people of color. As a black woman, I don’t identify with and relate to most of the non-black characters I see on TV, much less characters of my own race.

When I flip through the channels, it's disheartening. I don’t see myself or women like me being represented. I’m not a smooth, sexy, long-haired vixen; I’m not a large, sassy black woman; an angry Post Office employee. And I’m not alone. I created this series as an extension of my everyday experiences, as well as my friends. Ever since I launched the show in February, the response has been overwhelming.

Now more than ever, we need more diverse characters and stories on-screen. Like Cosby and Fresh Prince, I believe ABG is also universal. ABG is simply about embracing the “awkward” person in each and every one of us and learning to accept and love ourselves for who we are. Why we need Kickstarter: Thank you for checking out our Kickstarter page. Bag Lady: A One Woman Show & Web-series by Tammi Mac. It is a theatrical production of a one-woman show, starring Tammi Mac. Bag Lady is an epic saga of true stories, about a woman who carries the bags of her past, into each of her relationships with men.

The more relationships she encounters, the more bags she drags, which leads her into a whirlwind of bad decisions. When she finally connects her past to her present, she discovers the key to unlock the leash of bags that have bound her. Bag Lady is a hilarious, yet tear jerking dramedy, that recounts actual episodes of Tammi Mac’s life and the life of some of her very best friends. Laugh til you cry and cry til you laugh at what is probably, YOUR STORY too. (Think: For Colored Girls Who Have Considered Suicide When the Rainbow is Enuff or The Vagina Monolgues.) If you click the first reward option, $5 or more. "Unexpectedly Expecting" - A One-Woman Show by Angie Light.

Tickets are now on sale at Brown Paper Tickets! Not everyone was born wanting to have kids. For me, it was a struggle to get to a point where I was ready. Elephant Stageworks / Elephant Theatre Company. Creating Your One-Man or One-Woman Show, Part One - acting advice. Self-Producing V: Sources of Income, Pt. 1. Submit. We want to read your story. Everyone has one. In fact, everyone has a REALLY interesting one. Send yours to us and tell your story on our stage! Stories must be taboo, which means you wouldn’t really ever talk about them at a dinner party. They can’t be drunk stories because most people love to talk about how drunk they got that one time.

They must show your vulnerable side. These are things that everyone deals with in one way or another. Most importantly, your story must be funny! Requirements: Please send us a Word Doc. 1500 words or less Even if it’s about suicide, it should have some humor to it. NEW YORK CITY!!!! People reading things that are funny, dirty and sad, twice a month in Los Angeles. Kevin Allison Presents: RISK! Live Show & Podcast! Want to tell a story on the RISK!

This is where the rubber meets the road--we took creative risks and pushed past our normal habits and ideas about who we are and what we can create. Long Form Monologue/One Person Shows. Written and Edited by Lindsay Price June, 2007 Welcome! Where did the summer go? It's time to gear up for another year. We here at Theatrefolk are pretty excited about the upcoming days, weeks and months. New products, new plays, new conferences, a new look for our website, the list goes on. For Spotlight this month we're going to look at the long form monologue and the One Person Show.

Creative Heart Coaching: So You Want to Write a One Person Show? Part 1 of 7. How To Write A One-Person Show. Are you a writer who has always wanted to write, produce, and star in your own show? Creating Your One-Man or One-Woman Show, Part One - acting advice. (2) Awaken The Solo Performer Course. Black Executive Allegedly Fired From BP For Braided Hair And Ethnic Clothing. We're Not Joking. Melphine Evans, A black former executive at BP (British Petroleum Oil Co.), is suing the oil company for allegedly firing her because of her braided hair and "ethnic" attire.

One-person show. Sarah Jones, Playwright, Scouting the City for Her Characters. UNPACKED, a one-woman show about growing up everywhere by Elizabeth Liang. All For One Theater Festival. The One-Man Show: 8 Solo Performers To Watch. United Solo.