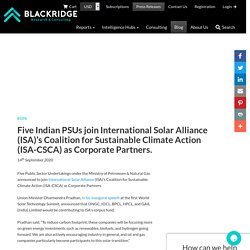 Union Minister Dharmendra Pradhan, in his inaugural speech at the first World Solar Technology Summit, announced that ONGC, IOCL, BPCL, HPCL, and GAIL (India) Limited would be contributing to ISA's corpus fund. Pradhan said, "To reduce carbon footprint, these companies will be focusing more on green energy investments such as renewables, biofuels, and hydrogen going forward. We are also actively encouraging industry in general, and oil and gas companies particularly become participants to this solar transition.” About International Solar Alliance (ISA) ISA is a joint initiative of France and India and launched during COP21 to increase the deployment of solar energy technologies in developing member countries. Current Developments Way Ahead. Why Indian Consumers are not able to enjoy the Low global crude prices. During these turbulent times when the international crude oil price has fallen steeply to low levels, the retail price of petrol and diesel in India has not come down even though the supply has outpaced the demand. 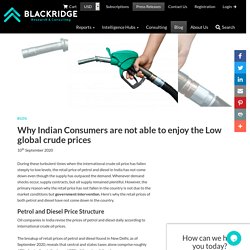 Whenever demand shocks occur, supply contracts, but oil supply remained plentiful. However, the primary reason why the retail price has not fallen in the country is not due to the market conditions but government intervention. Here's why the retail prices of both petrol and diesel have not come down in the country. Petrol and Diesel Price Structure Oil companies in India revise the prices of petrol and diesel daily according to international crude oil prices. 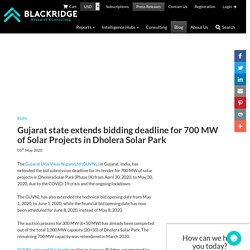 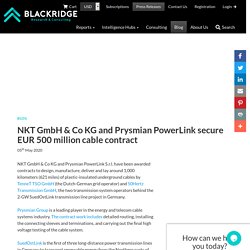 Prysmian Group is a leading player in the energy and telecom cable systems industry. Saipem bags EUR 280 Million Gas Pipeline Project. A contract worth approximately EUR 280 million has been awarded to Saipem, a leading company in engineering, drilling, and construction of major projects in the energy and infrastructure sectors, by GAZ-SYSTEM S.A. for the transportation and installation of a natural gas pipeline between Denmark and Poland in the Baltic Sea. 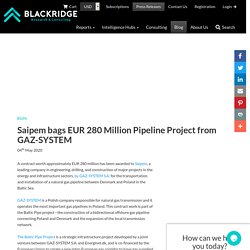 GAZ-SYSTEM is a Polish company responsible for natural gas transmission and it operates the most important gas pipelines in Poland. This contract work is part of the Baltic Pipe project—the construction of a bidirectional offshore gas pipeline connecting Poland and Denmark and the expansion of the local transmission network. The Baltic Pipe Project is a strategic infrastructure project developed by a joint venture between GAZ-SYSTEM S.A. and Energinet.dk, and is co-financed by the European Union to create a new inter-European gas corridor to have gas supplied directly from Norway to the markets in Poland, Denmark, and neighboring countries. Foresight Group has completed the acquisition of Sweden’s Skaftasen wind project. On April 20, 2020, Foresight Group LLP, a leading independent infrastructure and private equity investment management firm in the United Kingdom announced the completion of its acquisition of the 231 MW Skaftasen wind project in Sweden. 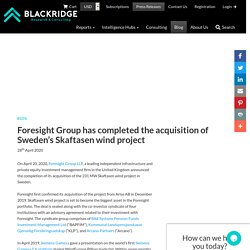 Foresight first confirmed its acquisition of the project from Arise AB in December 2019. Skaftasen wind project is set to become the biggest asset in the Foresight portfolio. The deal is sealed along with the co-investor syndicate of four institutions with an advisory agreement related to their investment with Foresight. The syndicate group comprises of BAE Systems Pension Funds Investment Management Ltd (“BAPFIM”), Kommunal Landspensjonskasse Gjensidig Forsikringsselskap (“KLP”), and Arcano Partners (“Arcano”).

In April 2019, Siemens Gamesa gave a presentation on the world’s first Siemens Gamesa 5.X platform during WindEurope Bilbao trade fair. This is part of our Wind Intelligence Service and Project Tracker Services. France Shoot Up its Offshore Wind Energy target to 8.75 GW. After the public consultation held from January 20th, 2020 to February 20th, 2020, the Multi-annual Energy Plan (MEP) or Programmation Pluriannuelle de l’énergie (PPE) came into effect on April 23rd, 2020. 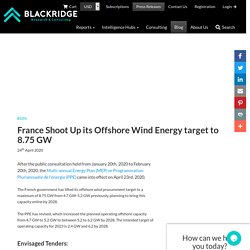 The French government has lifted its offshore wind procurement target to a maximum of 8.75 GW from 4.7 GW-5.2 GW previously, planning to bring this capacity online by 2028. The PPE has revised, which increased the planned operating offshore capacity from 4.7 GW to 5.2 GW to between 5.2 to 6.2 GW by 2028. The intended target of operating capacity for 2023 is 2.4 GW and 6.2 by 2028. Envisaged Tenders: · In 2020, a tender will be released for 1000 MW offshore wind project in Manche Est Mer du Nord. · In 2021 and 2022, a tender would be released for wind farm between 500-1000 MW wind farm off the coast of Oléron. · Another 3*250 MW floating wind farm tenders will see in Brittany and the Mediterranean areas. Spain’s Endesa Seeking Approval for the First Phase of 1.7 GW of Renewable Energy Deployment. Endesa, a leading company in the Spanish electricity sector and the second-biggest operator in the electricity market in Portugal, has applied to Aragon’s Department of Industry, Competitiveness, and Business Development to build a 50 MW solar PV plant on the site of the Andorra thermal power station, situated in Teruel province, Spain. 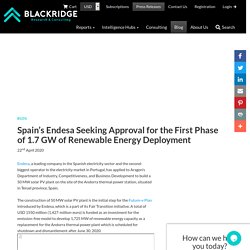 The construction of 50 MW solar PV plant is the initial step for the Future-e Plan introduced by Endesa, which is a part of its Fair Transition initiative. A total of USD 1550 million (1,427-million-euro) is funded as an investment for the emission-free model to develop 1,725 MW of renewable energy capacity as a replacement for the Andorra thermal power plant which is scheduled for shutdown and dismantlement after June 30, 2020.

The whole target is planned in three phases. All the stages are expected to be completed by 2026. Three Tidal Tech Developers Signed Up For Morlais Project. North Wales tidal stream energy project, Morlais, received a significant boost to their project following their announcement of addition of three new turbine developers to with the project. After months of talks with the French makers, namely Hydro Quest, Sabella’s & Spain maker Magallanes the deal was sealed to deploy their turbine equipment on the commercial scale at Crown Estate-designated zone off the coast of Anglesey, North Wales, United Kingdom. The social enterprise, Menter Môn, runs the Morlais project. It has the potential to become one of the most significant tidal energy projects in the world. Electricity generated from this site will be transmitted to the National grid. Uzbekistan’s Ministry of Energy released EOI for its 100 MW Wind Project. The Ministry of Energy, Uzbekistan has released the invitation for Express of Interest (EOI) for its initial wind Public-Private Partnership (PPP) tender of 100 MW. 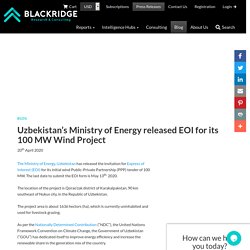 The last date to submit the EOI form is May 13th, 2020. The location of the project is Qorao’zak district of Karakalpakstan, 90 km southeast of Nukus city, in the Republic of Uzbekistan. The project area is about 1636 hectors (ha), which is currently uninhabited and used for livestock grazing. As per the Nationally Determined Contribution (“NDC”), the United Nations Framework Convention on Climate Change, the Government of Uzbekistan (“GOU”) has dedicated itself to improve energy efficiency and increase the renewable share in the generation mix of the country. To meet the NDC objectives, GOU has deployed a strategy to add up to 30 GW of installed capacity by 2030, which includes solar (5 GW), wind (3 GW), and hydro (3.8 GW). Tender Process Snapshot The tender process consists of two stages. First Stage: Second Stage: Massive 600 MW Energy Storage Set to Open in Australia.

French renewable energy developer Neoen along with Mondo Power has submitted a planning application for the battery storage facility known as “Victoria big battery” to the Statutory Planning department of the City of Greater Geelong. Victoria big battery project will be four times the size of the Tesla big battery, officially known as “Hornsdale Power Reserve,” which is at Hornsdale in South Australia. The estimated project budget is USD 185 million (AUD 300 million), and the proposed capacity of the storage facility is 600 MW. The project is located at the Moorabool terminal station, 13 km northwest of the Geelong CBD. The 100 MW/129 MWh Tesla Big Battery, which is being operated by Neoen, has seen significant numbers in revenue in recent times, so they are planning for a 50% up-gradation. In the first year of operation, Tesla Big Battery (Hornsdale Power Reserve) saved almost USD 25 million in grid stabilization cost.

Global LNG Market Outlook to 2025. The rising cost-competitiveness of LNG, coupled with a push for cleaner air, expansion in LNG usage in transportation and industrial sectors, development of the Asian LNG spot market, expansion of LNG Infrastructure, and supporting government policies are driving the growth of the LNG market. The reduction in liquefaction and regasification cost, development of new technologies like SSLNG and FLNG and all-time low prices further push LNG demand across the globe.

With the outbreak of the Covid-19, industry is experiencing low prices and oversupply. JKM slipped to as low as USD 1.825 per MMBTU in April 2020, reduced gas demand, force majeure notices, DQT requests, tank top situation, and increased concerns over projects' viability. As major LNG demand centers worldwide have begun easing lockdown measures and are gradually opening up the economy, the LNG market has expected to rebound. Our report will provide insights of the Global LNG Market.

The investments related to deep-water projects are expected to be limited in short time period as resources are typically more expensive to develop in remote locations. Due to recent offshore oil and gas discoveries, the offshore construction market segment will likely dominate the market during the forecast period, particularly the North Sea area. The global offshore construction market is expected to grow in the medium term as market recovers from the pandemic. Brazil and the United States together accounted for more than 90% of ultra-deep-water production globally. Global Steam Turbine Market Outlook to 2025. In the last few years, globally, the steam turbines market weakened due to environmental regulations. Nevertheless, the growing demand from thermal renewables (biomass, waste-to-energy, geothermal, and solar CHP, etc.) is expected to propel the steam turbine market growth.

With the outbreak of the COVID-19 pandemic, there is a sharp pullback in economic activity due to mandatory lockdowns and other containment measures. According to the IMF World Economic Outlook published in June 2020, the world economy is set to post a -4.9% GDP growth rate in 2020. That will be a downgrade of 8.2% from January 2020. Analysis of COVID 19 Impact on Battery Market. Global Heat Recovery Steam Generator (HRSG) Market Outlook to 2025. Global Air Quality Control Systems (AQCS) Market Outlook to 2025. Growing need to meet increasingly stringent air quality and emission standards is one of the primary growth drivers for the Air Quality Control Systems (AQCS) Market. Global Geothermal Energy Market Outlook to 2025. Only five countries produce above 1 GW of geothermal energy, out of which US comes 1st with a capacity of 3653 MW as of 2018, and 913 MW proposed to install by 2022. Constant availability of energy is a significant advantage in Geothermal energy.

Global Power Plant Service Market Outlook to 2025. Global Building Energy Management Systems Market. The emergence of IoT and could tech plays a prominent role in BEMS market, many governments, globally are focussing on developing smart cities which gives more demand for BEMS market, BEMS helps to reduce costs by conserving energy, it quickly identifies electrical anomalies and reduces the risk of power spikes, shutdowns and electrical failures. BEMS are sophisticated systems integrating hardware and software services with information and communication technologies for automating, managing and controlling energy resources. Global Compressor Control Systems Market. Global compressor control systems market is predicted to proliferate due to the development of innovative advanced compressor systems. The demand for compressors is increasing as the manufacturing facilities are growing along with various applications and energy production.