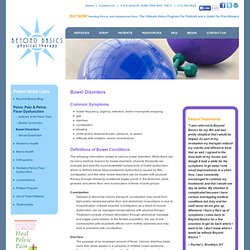 While there can be many medical reasons for bowel disorders, physical therapists can evaluate and treat the musculoskeletal components of bowel dysfunction, which is defined below. Musculoskeletal dysfunctions caused by IBS, constipation, and the other bowel disorders can be treated with physical therapy through releasing myofascial trigger points in the abdomen, back, gluteals, and pelvic floor, and re-education of these muscle groups. Pelvic Pain & Pelvic Floor Dysfunction - Physical Therapy New York City. Millions of Americans are suffering from pelvic floor dysfunction, yet for most, the disease goes unidentified and untreated. 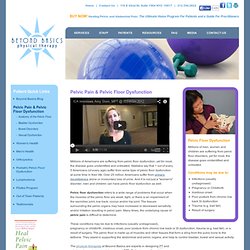 Statistics say that 1 out of every 5 Americans (of every age) suffer from some type of pelvic floor dysfunction at some time in their life. Over 25 million Americans suffer from urinary incontinence alone or involuntary loss of urine. And it is not just a "women's" disorder; men and children can have pelvic floor dysfunction as well. Pelvic floor dysfunction refers to a wide range of problems that occur when the muscles of the pelvic floor are weak, tight, or there is an impairment of the sacroiliac joint, low back, coccyx and/or hip joint. The tissues surrounding the pelvic organs may have increased or decreased sensitivity and/or irritation resulting in pelvic pain. The physical therapists at Beyond Basics are experts in designing PT and rehab regimens to treat pelvic pain and PFD. Treatment may include: For more information, please contact us. 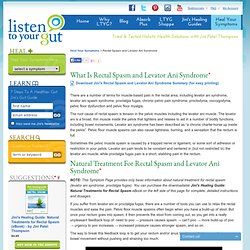 The root cause of rectal spasm is tension in the pelvic muscles including the levator ani muscle. The levator ani is a broad, thin muscle inside the pelvis that tightens and relaxes to aid in a number of bodily functions, including bowel movements. Levator ani syndrome has been described as “a chronic charlie-horse up inside the pelvis”. Pelvic floor muscle spasms can also cause tightness, burning, and a sensation that the rectum is full. Sometimes the pelvic muscle spasm is caused by a trapped nerve or ligament, or some sort of adhesion or restriction in your pelvis.

Natural Treatment For Rectal Spasm and Levator Ani Syndrome* 1. 2. Magnesium is nature's muscle relaxant. 3. 2 months or more healed. The Pelvic Floor Paradox. Massage TodayDecember, 2006, Vol. 06, Issue 12 By Leon Chaitow, ND, DO When I started writing this periodic column, I mentioned that every now and then, a "wow-factor" enters my life; synchronistic events and pieces of information coincide to illuminate what was previously foggy. 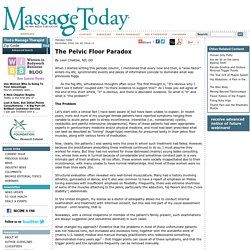 As the fog lifts, simultaneous thoughts often occur. The first thought is, "It's obvious why I didn't see it before" coupled with "Is there evidence to support this? " As I hope you will agree at the end of this short article, "it" is obvious, and there is abundant evidence. The Problem Let's start with a clinical fact I have been aware of, but have been unable to explain. Now, clearly, the patients I was seeing were the ones in whom such treatment had failed. Structural evaluation often revealed very well-toned musculature. Nowadays, with a clinical chaperone or member of the patient's family present, such examinations are always suggested (and sometimes declined) in such cases. Anismus. Anismus (or dyssynergic defecation) refers to the failure of the normal relaxation of pelvic floor muscles during attempted defecation. 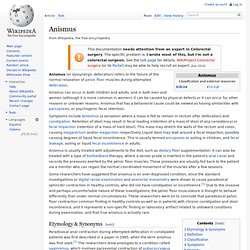 Anismus can occur in both children and adults, and in both men and women (although it is more common in women). It can be caused by physical defects or it can occur for other reasons or unknown reasons. Anismus that has a behavioral cause could be viewed as having similarities with parcopresis, or psychogenic fecal retention. Symptoms include tenesmus (a sensation where a mass is felt to remain in rectum after defecation) and constipation. Retention of stool may result in fecal loading (retention of a mass of stool of any consistency) or fecal impaction (retention of a mass of hard stool). Anismus is usually treated with adjustments to the diet, such as dietary fiber supplementation. Etymology & Synonyms[edit] Latin ani - "of the anus" Latin spasmus - "spasm" Many terms have been used synonymously to refer to this condition, some inappropriately. Chronic Pelvic Pain.

Pelvic pain is an uncommon but significant problem in some women. 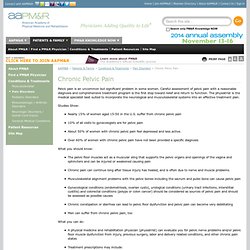 Careful assessment of pelvic pain with a reasonable diagnosis and comprehensive treatment program is the first step toward relief and return to function. The physiatrist is the medical specialist best suited to incorporate the neurological and musculoskeletal systems into an effective treatment plan. Paindrawing.pdf.