Brim silos: How street artist Guido van Helten made investing in a tiny town an unlikely good idea. Posted Three years ago, the only hotel in the small Victorian farming town of Brim was closed after it had languished on the market unable to find a buyer. 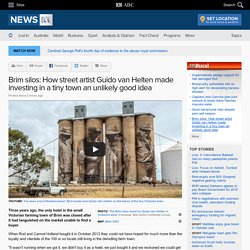 When Rod and Carmel Holland bought it in October 2013 they could not have hoped for much more than the loyalty and clientele of the 100 or so locals still living in the dwindling farm town. "It wasn't running when we got it, we didn't buy it as a hotel, we just bought it and we reckoned we could get it up and running again," Mr Holland said. "Some people said we'd never ever get it up and happening. " But they did, and Mr Holland said the pub had "done all right" for the past two years. "But we've had bad seasons up here, so the farmers have pulled their belts in a bit, and not spending ... it was looking after itself, but we still had to find a little extra money working outside the hotel just for spending money for us," he said. "There's no railways here, no post master, no railway gangers," one local said about Brim. 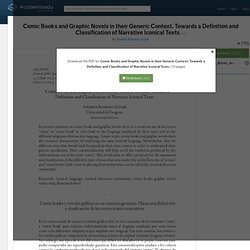 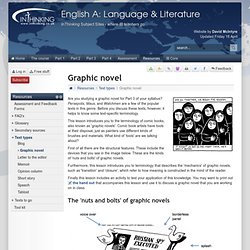 Persepolis, Maus, and Watchmen are a few of the popular texts in this genre. Before you discuss these texts, however, it helps to know some text-specific terminology. This lesson introduces you to the terminology of comic books, also known as 'graphic novels'. Comic book artists have tools at their disposal, just as painters use different kinds of brushes and materials. What kind of 'tools' are we talking about? First of all there are the structural features. Furthermore, this lesson introduces you to terminology that describes the 'mechanics' of graphic novels, such as 'transition' and 'closure', which refer to how meaning is constructed in the mind of the reader. Finally this lesson includes an activity to test your application of this knowledge. The hand out that accompanies this lesson and use it to discuss a graphic novel that you are working on in class.

Kapow! The language of comics. Glossary of Comic Book Terms - How To Love Comics. When talking to comic book fans it can sometimes feel like they are speaking another language. 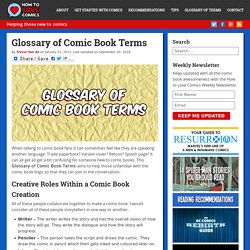 Trade paperback? Variant cover? Retcon? Splash page? It can all get all get a bit confusing for someone new to comic books. Creative Roles Within a Comic Book Creation All of these people collaborate together to make a comic book. Writer – The writer writes the story and has the overall vision of how the story will go. Comic Book Formats Single Issue – This is the serial magazine style format of a comic. Prestige Edition – These are comics that are generally 48-64 pages long that have a thin spine. Digital Comics – Editions of comics that can be viewed on computer screens, tablets or mobile phones.

Digital First – This is where a comic is released in a digital format first then later in print. Collected Edition – This is where multiple single issues are collected to create a whole story or set of stories, often collecting 5-6 single issues. Www.readwritethink.org/files/resources/lesson_images/lesson1102/terms.pdf.