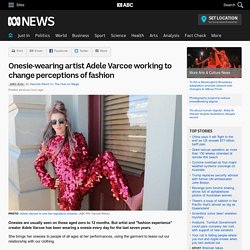 No Room for America Left in Those Jeans. The news came as a shock. 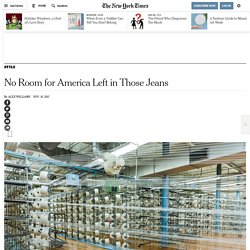 A couple years ago, Mr. Williams, who also runs a marketing company that represents heritage brands like Red Wing and Levi’s, wrote a paean about his visit to the White Oak plant. Photo. Fast Fashion’s Surprising Origins - Racked. The Vogue editor didn’t hold back. 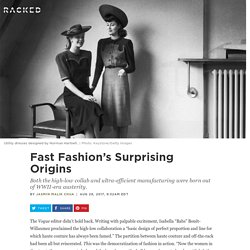 Writing with palpable excitement, Isabella “Babs” Bouët-Willaumez proclaimed the high-low collaboration a “basic design of perfect proportion and line for which haute couture has always been famed.” The partition between haute couture and off-the-rack had been all but eviscerated. The Cost of Dead Inventory: Retail’s Dirty Little Secret. NEW YORK, United States — Check any recent retail headline and it’s hard to miss the headwinds the industry has been experiencing. 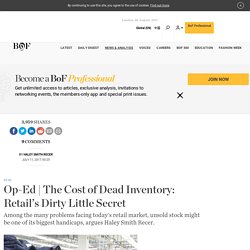 A warm winter, consumers focusing more on experiences than their closets, and the ever elusive "omnichannel strategy" are just a few reasons why retailer’s top lines have been struggling. These misses translate to exponentially weaker bottom lines as retailers and fashion houses struggle to adapt their organisations quickly enough to make up for lower sales. We’re all aware of the layoffs permeating retail headlines and of the constant promotional activities as brands try to prompt purchasing — but one plan of action that has received little, if any attention (at least publicly) is the effort to buy more responsibly up front and limit the amount of dead inventory at the end of a season.

Retailers define success at the end of a season in many ways. Did we hit our retail sales or gross margin dollar plan? Automated Sewbot to make 800,000 adidas T-shirts daily. Not So Fast (Fashion)! African Countries to Ban Secondhand Clothing Imports. A flea market in Kampala, Uganda — a popular resource for local shoppers seeking secondhand bargains from the West | Image credit: CNN In March, the governments of the East African Community, which includes Kenya, Tanzania, Uganda, Rwanda, and Burundi, proposed a ban on imports of secondhand clothes to their regional trade bloc. 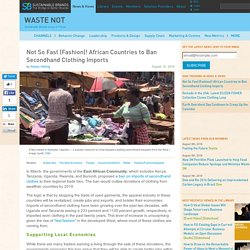 The ban would outlaw donations of clothing from wealthier countries by 2019. The logic is that by stopping the trade of used garments, the apparel industry in these countries will be revitalized, create jobs and exports, and bolster their economies. Imports of secondhand clothing have been growing over the past two decades, with Uganda and Tanzania seeing a 233 percent and 1100 percent growth, respectively, in imported worn clothing in the past twenty years. This level of increase is unsurprising given the rise of “fast fashion” in the developed West, where most of these clothes are coming from.

Supporting Local Economies The Global Impact. How Fast Fashion Destroyed the Capsule Wardrobe, and What You Can Do to Reclaim It - Eco Warrior Princess. Australian Fashion Week: Adapting in a digital age a matter of survival, experts say. Posted Australian Fashion Week has kicked off with Toni Maticevski sending his collection down the runway, but it's not just about the glitz and glamour as social media challenges the viability of the traditional trade event. 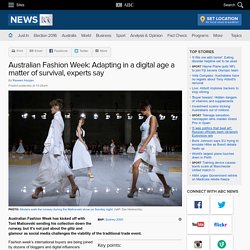 Key points: International buyers joined by bloggers, social media influencersEmergence of social media has forced industry to changeEvent pushed back from April to May Fashion week's international buyers are being joined by dozens of bloggers and digital influencers including social media heavyweights like Adam Katz Sinding, Lee Oliveira and Paola Alberdi. Those three names alone account for more than 1 million Instagram followers combined. CATALOGUE MAGAZINE - Your fashion, beauty, design and music magazine. 2015 was the year of major shakeups in the high fashion space. 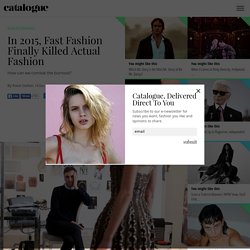 Out of the blue, Raf Simons up and left Dior, Alber Elbaz was sacked from Lanvin and labels like Band of Outsiders and Jonathan Saunders shuttered their doors for good. But despite all that, Zara owner Inditex’s profits were up by 20 percent this year, with a 15 percent spike in sales. And, according to Vogue, statistics show that Australians spend more money on clothes than anyone else in the world — with an average annual spend of US$1050 (that’s almost AUD$1500). This is in stark contrast to the sinking profits seen across the luxury sector of late though, with historic brands like Prada performing amongst the worst.

This disconnect suggests that, on a global level, people are more inclined to spend their money on fast fashion than they are to invest in quality designer goods. 4 Common Shopping Fallacies and How to Avoid them. Fashion made-in-China: fine for everyone but the Chinese. It has been called fashion's dirty little secret but according to Miuccia Prada, soon everybody will be doing it. 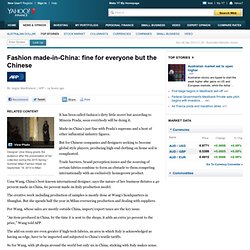 Made-in-China's just fine with Prada's supremo and a host of other influential industry figures. But for Chinese companies and designers seeking to become global style players, producing high-end clothing on home soil is complicated. Trade barriers, brand perception issues and the sourcing of certain fabrics combine to form an obstacle to them competing internationally with an exclusively homegrown product. Uma Wang, China's best-known international designer, says the nature of her business dictates a 40 percent made-in-China, 60 percent made-in-Italy production model.

The creative work including production of samples is mostly done at Wang's headquarters in Shanghai. For Wang, whose sales are mostly outside China, import/export taxes are the key issue. "An item produced in China, by the time it is sent to the shops, it adds an extra 30 percent to the price," Wang told AFP. Ill Seen, Ill Said: Aesthetic lives and the economic taint. The End of Trends. Anthony Vaccarello AW14, via Vogue. 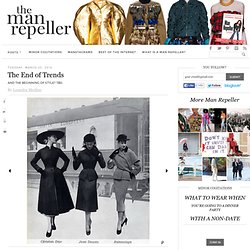 Lean Closet Movement. The Lean Closet Series will help all of us to jumpstart our New Year's resolutions for a leaner closet; it will provide tools to help us invest in key pieces we will wear over the years; it will encourage us to take forgotten things we may have accumulated and gift them to others. 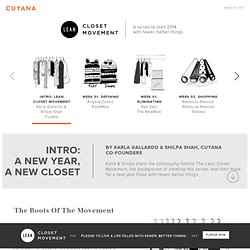 The series will be taught by experts in the field each week. The Nife en l'Air: On Psychological Price. When minimalists discuss the price of things, it usually comes down to investing in quality pieces, calculating cost per use (or cost per wear in the case of clothing). Or it is about high street store and the real price of the cheap items we have at our disposal.

Today, I'd like to discuss another side to price: how marketing sets a price point to objects, and why we should be aware of that as consumers. When a company decides to put an object on shelf, they have to decide how much they want to sell it. First, there is the basic, logical calculation - how much does it cost to produce, and how much margin they need to get out of it to pay for the company's expenses, paychecks etc. I'm sure there are finance teams with excel sheets and "ROI calculations" right on top of it.