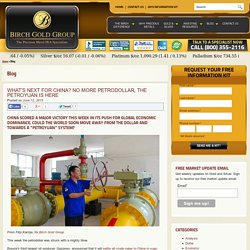 Could the world soon move away from the dollar and towards a “petroyuan” system? From Filip Karinja, for Birch Gold Group This week the petrodollar was struck with a mighty blow. Russia’s third largest oil producer, Gazprom, announced that it will settle all crude sales to China in yuan, and thus officially ditch the dollar. With relations between China and Russia growing stronger by the day, both economically and militarily, and with the U.S. placing more and more sanctions on Moscow, Russia’s movements away from Western-dominated systems are increasing. That now includes Russian companies who are beginning to take on efforts to de-dollarize. Continue reading. Germany Joins China and Russia's Move to Gold. Posted on From Filip Karinja, for Birch Gold Group Germans are now rushing into gold. 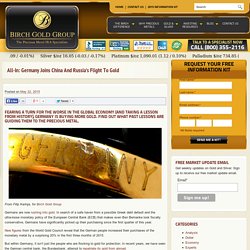 In search of a safe haven from a possible Greek debt default and the ultra-loose monetary policy of the European Central Bank (ECB) that makes even Ben Bernanke look fiscally conservative, Germans have significantly picked up their purchasing since the first quarter of this year. New figures from the World Gold Council reveal that the German people increased their purchases of the monetary metal by a surprising 20% in the first three months of 2015. But within Germany, it isn’t just the people who are flocking to gold for protection: In recent years, we have seen the German central bank, the Bundesbank, attempt to repatriate its gold from abroad.

Texas to New York: "Give Us Back Our Gold" Posted on From Filip Karinja, for Birch Gold Group In the past few years, we’ve seen a groundswell of nations demanding their gold back from the New York Federal Reserve. 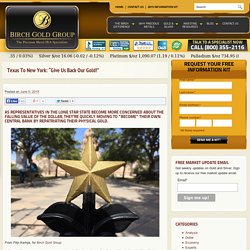 Already, that list includes Germany, Austria, Netherlands, Belgium and Venezuela. Now another place is joining the list, but it isn’t a country: It’s the state of Texas. The Lone Star state of Texas wants its gold back – a whopping $1 billion dollars of it. China's Claim for Gold Catapults, Will a New Record be Set? Posted on For some time now, mainstream analysts have been insisting that Chinese gold consumption is nowhere near the gold withdrawal numbers reported by the Shanghai Gold Exchange (SGE). 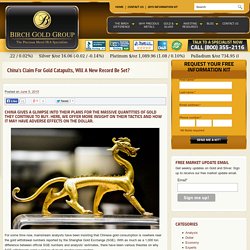 With as much as a 1,000 ton difference between official SGE numbers and analysts’ estimates, there have been various theories on why SGE withdrawals paint a picture of much greater consumption. Writing for Mineweb, Lawrence Williams recently tried to shed some light on the discrepancies between SGE withdrawals and analysts’ reports, as well as the direction China might be moving towards with the precious metal. In his Bloomberg Precious Metals Forum presentation, Philip Klapwijk former executive chairman of GFMS offered his take on the issue. Klapwijk – operating out of Hong Kong himself – attributed the 1,000 ton discrepancy to “technically illegal“ cross border movement of gold from mainland China to Hong Kong. Austria Demands its Gold Back from the U.K.

Posted on Austria announced this week that it will no longer allow the U.K. to store their gold reserves worth billions of dollars. 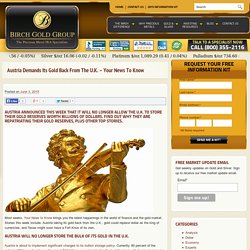 Find out why they are repatriating their gold reserves, plus other top stories. What Tibble v Edison Supreme Court ruling means for 401(k)'s. Posted on From Filip Karinja, for Birch Gold Group In what may soon prove to be a landmark case, last week the U.S. 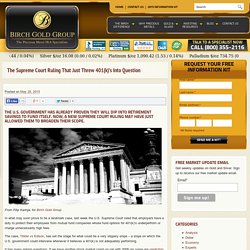 Supreme Court ruled that employers have a duty to protect their employees from mutual fund companies whose fund options for 401(k)’s underperform or charge unnecessarily high fees. The case, Tibble vs Edison, has set the stage for what could be a very slippery slope – a slope on which the U.S. government could intervene whenever it believes a 401(k) is not adequately performing. It has many asking questions: If we have another stock market crash on par with 2008 (as some are predicting for this year) would the government step in when 401(k)’s suffer any kind of substantial loss? 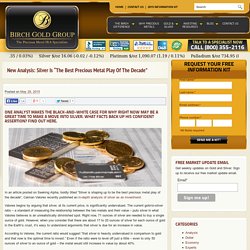 Valores begins by arguing that silver, at its current price, is significantly undervalued. China's Push for Reserve Currency Status Threatens the West. Posted on From L Todd Wood, for Birch Gold Group Donald Rumsfeld famously said during the stressful times after 9/11, “…there are also unknown unknowns. 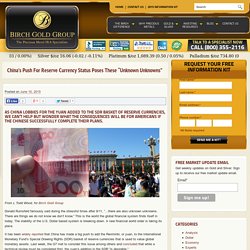 There are things we do not know we don’t know.” China's "One Belt, One Road" boosted by $16 billion gold fund. Posted on We’ve already written extensively about China’s recent efforts to establish themselves as a major financial superpower. 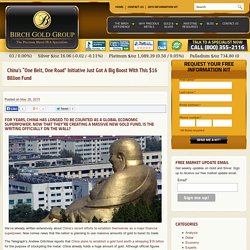 Now comes news that the nation is planning to use massive amounts of gold to boost its trade. The Telegraph’s Andrew Critchlow reports that China plans to establish a gold fund worth a whopping $16 billion for the purpose of stockpiling the metal. Nichols: When is the right time to back your savings with gold? Posted on With the tumultuous outlook of the global economic future and the many geopolitical uncertainties facing us in the middle east, is now the time to allocate some of your savings to gold? 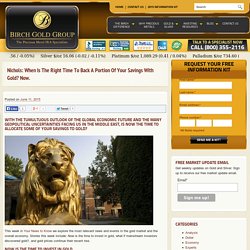 Silver Resources. Gold usually grabs all the headlines, but for many, an investment in silver can be just as savvy. According to studies by the United States Geological Survey in recent years, there are far fewer deposits of silver to be mined around the globe than previously believed. However that hasn’t slowed demand for the metal, which has soared in recent years. This increase in interest is due not only to investment demand, but also from a wide range of industry such as technology, medical, photography and solar power. Because the demand for silver comes from so many more sources than that of gold, it allows the savvy investor a unique way to diversify their portfolio of precious metals.

You can purchase your silver for physical possession or include it as part of your Precious Metals IRA. Ron Paul on gold, the dollar and the Fed; exclusive for Birch Gold. In this exclusive interview with Birch Gold Group, former Congressman Ron Paul shares his opinions on a number of topics, including investing in physical gold and silver, the future of the U.S. dollar and the role of the Federal Reserve. Rachel Mills for Birch Gold Group (BGG): This is Rachel Mills for Birch Gold Group. I am speaking with Ron Paul today. How are you, Ron Paul? Ron Paul (RP): I am doing very well. Nice to talk to you Rachel. BGG: It’s good to talk to you again, and by the way of information for Birch’s audience, I was your last press secretary on Capitol Hill in Congress and I worked for you for the 5 years.

RP: Okay! BGG: But, just really quick – today with you I’d like to go over several things. RP: Yes, for a good while. But finally the market overwhelmed. BGG: Yeah and I’ve heard people argue that the dollar is doing well against other currencies. So there is a lot of price inflation, but that’s the ultimate tests. RP: No, she’ll make them worse. BGG: Yeah, scary. Floyd Brown: Gold and Silver are Historic Forms of Money. Steve Forbes Interview: On the Federal Reserve, Dollar & Gold. Birch Gold Group. As the dollar continues to decline in value, more and more Americans are turning their attention to investing in hard assets such as gold. Unlike the dollar, the supply of gold and other precious metals can’t be artificially inflated on a government’s whim, thus making the metal a solid hedge against the Federal Reserve’s loose monetary policies.

Investors are also attracted to an investment in gold for the simple reason that it offers a way to further diversify their savings portfolio. Jim Rogers on QE, gold and inflation; exclusive Birch Gold interview. Posted on November 12, 2013 In this revealing interview with Birch Gold Group, Jim Rogers, legendary investor and author, explains just how badly Quantitative Easing and ongoing currency wars are damaging the U.S. economy, and why it’s so important for any person to protect their savings with physical gold and silver. Rachel Mills, Birch Gold Group (BGG): This is Rachel Mills for Birch Gold, and I am very pleased to be joined today by Jim Rogers, legendary investor.

Thank you so much Jim for joining me. Jim Rogers: I am delighted to be here Rachel. BGG: So today I wanted to talk a little about stock market highs and Quantitative Easing and inflation and a little bit of Federal Reserve and when is the taper is going to happen and currency wars. Precious Metals IRA Resources. Did you know that you can place physical precious metals directly into an IRA? It’s true: If you already have an IRA or 401k, or if you’ve been considering opening a new retirement savings account, you can reduce your exposure to the dollar and stock market by moving out of paper assets like stocks and mutual funds, and into real, tangible assets like gold and silver.

Not only does an IRA backed by precious metals protect you from the declining value of the dollar, but you retain all the same tax benefits of your current retirement savings account. Best of all, there are no tax implications or penalties for making the move. Precious Metals IRAs have become the foundation of business for Birch Gold Group – it’s why we’ve come to be known as the Precious Metal IRA Specialists. Peter Schiff on dollar crisis, economy and future of gold prices. Get Yours Today with Zero Obligation. Get Yours Today with Zero Obligation.

First issued in 1967, the Krugerrand is named after Paul Kruger, the 5th president of South Africa and war hero of the Second Boer War, and the rand, the official South African currency unit. In 1975, the coin became famous among Americans who were excited to once again take possession of gold as a personal asset. The Krugerrand was such a wild success due to the gold bull run that other countries followed suit, issuing their own bullion coins. Canada (Gold Maple Leaf), Australia, China, the United States (American Gold Eagle) and Great Britain all issued their first bullion coins in the late 1970s through the 1980s.

Though it inspired other countries’ bullion coins, the Krugerrand stands alone in one important regard: Although it was meant primarily as an investment vehicle, it was also issued as legal tender for use in South Africa. Gold Coins > Saint-Gaudens Double Eagle ($20) Gold Coins > Liberty Head (Coronet Head) Collection. In the late 18th Century, with passage of the Coinage Act of 1792 and establishment of the U.S. Gold Coins > Indian Head Eagle. After the successfully landing the highly esteemed, but ailing sculptor Augustus Saint-Gaudens to redesign the some aspect of US coinage in 1904, President Theodore Roosevelt was swift in asking the artist to make models for several different denominations of gold coins. Canadian Gold Maple Leaf. American Buffalo. The first American coin of its kind, the American Buffalo, also known as the Gold Buffalo, is a 24-karat bullion coin.

Its significance can be accredited to it being the first large-scale circulation of a .9999 fine gold coin in the history of the United States Mint. The coin features images by American sculptor James Earle Fraser who designed America’s five-cent coin, first introduced in 1913, which serves as a testament to the native beauty of the American West. The front of the coin displays a Native American, who is a blend of three Indian chiefs – Big Tree, Iron Tail and Two Moons – with the word “LIBERTY” engraved to the right. American Gold Eagle (Proof) American Gold Eagle (Bullion) Risk Disclosure. Precious Metals IRA - Backed by Gold & Silver. Make A Smart Investment. Turn Paper Into Smart Gold Investments. Birch Gold Group Reviews from Real Customers. Why are Precious Metals a Good Investment? The Birch Gold Difference ➤ Our Knowledge is Your Advantage.