An Overview Of Narrowband IoT (NB-IoT) How the AWS IoT Platform Works - Amazon Web Services. AWS IoT provides an SDK to help you easily and quickly connect your hardware device or your mobile application. 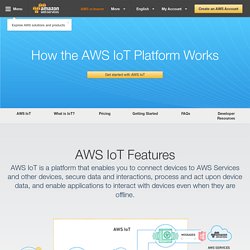 The AWS IoT Device SDK enables your devices to connect, authenticate, and exchange messages with AWS IoT using the MQTT, HTTP, or WebSockets protocols. The Device SDK supports C, JavaScript, and Arduino, and includes the client libraries, the developer guide, and the porting guide for manufacturers. You can also use an open source alternative or write your own SDK. To learn more read the AWS IoT Device SDK documentation or get started by downloading the SDKs. MQTT Dashboard. Is IoT replacing SCADA? - Blog. Twitter: @nokianetworks For more than 40 years Supervisory Control and Data Acquisition (SCADA) has helped various industries to monitor and manage their industrial applications and processes, helping to boost the efficiency of operations and reduce costs. 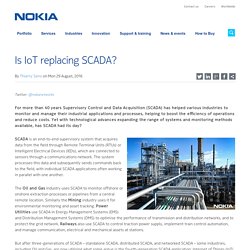 Yet with technological advances expanding the range of systems and monitoring methods available, has SCADA had its day? SCADA is an end-to-end supervisory system that acquires data from the field through Remote Terminal Units (RTUs) or Intelligent Electrical Devices (IEDs), which are connected to sensors through a communications network. The system processes this data and subsequently sends commands back to the field, with individual SCADA applications often working in parallel with one another. Home - Rethink Technology Research ltd. Darpa competition sees dawn of autonomous IoT hacking - Rethink IoTRethink Internet of Things – IoT News and Analysis. This site uses cookies to store information on your computer. 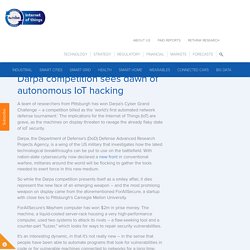 Some of these cookies are essential to make our site work and others help us to improve by giving us some insight into how the site is being used. These cookies are set when you submit a form, subscribe to premium articles. We also use some non-essential cookies to anonymously track visitors or enhance your experience of this site. If you're not happy with this, we won't set these cookies but some nice features on the site may be unavailable. To control third party cookies, you can also adjust your browser settings. By using our site you accept the terms of our Privacy Policy. Fuchsia Is Google's OS For IoT; Runs Virtually On Everything - IOT League. Google is known for building operating systems from time to time; however, the one it’s working on at this moment seems unique than others. 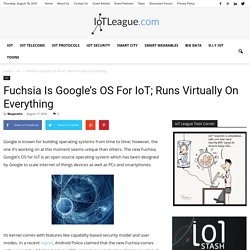 The new Fuchsia, Google’s OS for IoT is an open source operating system which has been designed by Google to scale internet of things devices as well as PCs and smartphones. Its kernel comes with features like capability-based security model and user modes. In a recent report, Android Police claimed that the new Fuchsia comes with support for 64-bit Intel-based PCs and advanced graphics. Not to mention, it uses Dart programming language. Also Read: List of operating systems for IoT As of now, you can run the new Fuchsia, Google’s OS for IoT on a virtual machine or a computer depending upon the requirement. Whatever be the case, users will have to wait and watch to know the final status of Fuchsia. 80 Linux Monitoring Tools for SysAdmins. It’s hard work monitoring and debugging Linux performance problems, but it’s easier with the right tools at the right time. 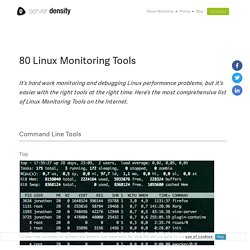 Here’s the most comprehensive list of Linux Monitoring Tools on the Internet. Command Line Tools Top This is a small tool which is pre-installed on many unix systems. When you want an overview of all the processes or threads running in the system: top is a good tool. Htop Htop is essentially an enhanced version of top. Atop Atop monitors all processes much like top and htop, unlike top and htop however it has daily logging of the processes for long-term analysis. Apachetop Apachetop monitors the overall performance of your apache webserver. Ftptop. How to Monitor Network Bandwidth On Linux. Analyzing and monitoring the network traffic of an entire network infrastructure is a very important task for every Linux system administrator. 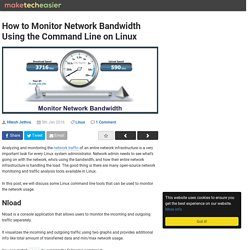 Network admin needs to see what’s going on with the network, who’s using the bandwidth, and how their entire network infrastructure is handling the load. The good thing is there are many open-source network monitoring and traffic analysis tools available in Linux. In this post, we will discuss some Linux command line tools that can be used to monitor the network usage. Nload is a console application that allows users to monitor the incoming and outgoing traffic separately. It visualizes the incoming and outgoing traffic using two graphs and provides additional info like total amount of transferred data and min/max network usage. You can install nload by running the following command: sudo apt-get install nload Now run the nload command: Once the nload command is executed, you should see the following output. To install iptraf, run the following:

20 Command Line Tools to Monitor Linux Performance. It’s really very tough job for every System or Network administrator to monitor and debug Linux System Performance problems every day. After being a Linux Administrator for 5 years in IT industry, I came to know that how hard is to monitor and keep systems up and running. For this reason, we’ve compiled the list of Top 20 frequently used command line monitoring tools that might be useful for every Linux/Unix System Administrator. These commands are available under all flavors of Linux and can be useful to monitor and find the actual causes of performance problem.

This list of commands shown here are very enough for you to pick the one that is suitable for your monitoring scenario. 1.