The cost of loneliness: Canadians are facing a solitary future — and it's affecting their health. Why Loneliness Is Hazardous to Your Health. Source: Woman home alone by ezeileagu chibisi chidubem. 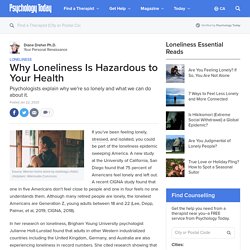 Wikimedia Commons If you’ve been feeling lonely, stressed, and isolated, you could be part of the loneliness epidemic sweeping America. A new study at the University of California, San Diego found that 75 percent of Americans feel lonely and left out. A recent CIGNA study found that one in five Americans don't feel close to people and one in four feels no one understands them. Although many retired people are lonely, the loneliest Americans are Generation Z, young adults between 18 and 22 (Lee, Depp, Palmer, et al, 2019; CIGNA, 2018). article continues after advertisement In her research on loneliness, Brigham Young University psychologist Julianne Holt-Lunstad found that adults in other Western industrialized countries including the United Kingdom, Germany, and Australia are also experiencing loneliness in record numbers. 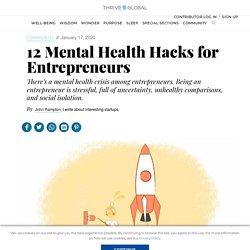 Mishra’s Mishmash: Social isolation and loneliness: major health issues for coming decade - The Post. The queen of Denmark has been remarkably successful at setting new agendas for public discourse despite the fact she is not the political head of the country. 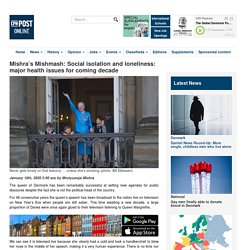 For 48 consecutive years the queen’s speech has been broadcast to the nation live on television on New Year’s Eve when people are still sober. This time awaiting a new decade, a large proportion of Danes were once again glued to their television listening to Queen Margrethe. We can see it is televised live because she clearly had a cold and took a handkerchief to blow her nose in the middle of her speech, making it a very human experience.

There is no time nor possibility to cut out such moments. Concordia's engAGE lab is a new space for study and engagement with seniors. MONTREAL -- Concordia University is giving seniors another reason to go to the Cavendish Mall by setting up a space to help combat social isolation, while getting creative and active. 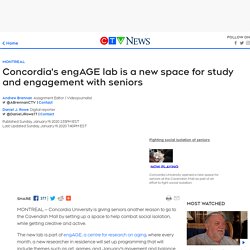 The new lab is part of engAGE, a centre for research on aging, where every month, a new researcher in residence will set up programming that will include themes such as art, games, and January's movement and balance program. "I would come back for painting, I would come back for exercieses, like for balancing," said Cote Saint-Luc resident Shirley Alter. The location is ideal for the type of study Concordia is pursuing. "Cavendish Mall is of course one mall that has a large population of older adults," said neuroscientist Najmeh Khalili-Mahani. Young People Are Befriending Lonely Seniors Across the UK by Volunteering as Storytellers. A simple, yet powerful, UK program has been fighting elderly isolation by recruiting young adults as volunteers to read to seniors with vision problems and dementia. 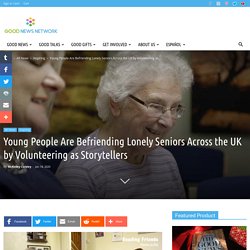 Lorna Burnett has benefited from the program having her vision “restored” by 15-year-old Ailsa, a schoolgirl who was paired with Burnett through the Reading Friends project. Prior to developing lupus in her 40s, Burnett was a librarian and avid reader who would read “two to three books every week”. After developing the disease, however, Burnett found herself unable to read or watch television for any length of time without her eyes hurting. RELATED: Two Sisters Have Been Reading Bedtime Stories for Children on Facebook Live Every Night. Talk to Me Worcester campaign launched to tackle social isolation. AN event which encourages the community to come together to tackle social isolation has been launched. 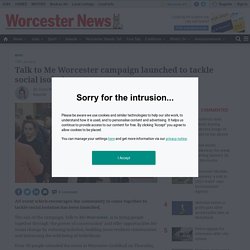 The aim of the campaign, Talk to Me Worcester, is to bring people together through ‘the power of conversation’ and offer opportunities for social change by reducing isolation, building more resilient communities and enhancing the well-being of individuals. Over 30 people attended the event at Worcester Guildhall on Thursday, January 9, which was organised by community cohesion officer, Basia Ligas. New ‘upmarket’ pizzeria set to open in Worcester by owners of The Olive Branch Mothercare closed in Worcester's Crowngate Shopping Centre Ms Ligas said: “The event worked out really well. “Some of those coming said that they live in isolation and feel lovely, so when they heard about the event, they were keen to pop in. “The launch is a great example of how a simple idea can help bring people together to meet and chat. 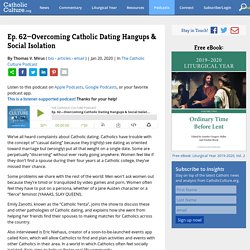 Mirus ( bio - articles - email ) | Jan 20, 2020 | In The Catholic Culture Podcast Listen to this podcast on Apple Podcasts, Google Podcasts, or your favorite podcast app.This is a listener-supported podcast! Thanks for your help! We’ve all heard complaints about Catholic dating. Catholics have trouble with the concept of “casual dating” because they (rightly) see dating as oriented toward marriage but (wrongly) put all that weight on a single date.