N.Y. Official: Require Licenses for Digital Currency Exchanges. Canadian Mint ready to test its own digital money project. As the government body responsible for the production of loonies, toonies, nickels and sundry “limited-edition” collector coins, the Royal Canadian Mint is hardly the first thing that comes to mind when you think of cutting-edge technology. 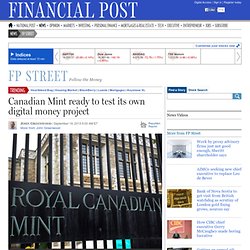 But that may be about to change. Q&A: MintChip boss explains why project 'isn't a stretch for us' Digital currencies such MintChip offer enormous opportunities for both consumers and business, but experts warn the space is fraught with peril. Marc Brûlé, the Royal Canadian Mint’s point man on its virtual money project, talked to the Financial Post’s John Greenwood about what makes MintChip different and why it will be successful Continue reading.

Royal Canadian Mint readies its version of Bitcoin: MintChip. Mobile payments may edge a little closer to becoming commonplace in Canada, with the unveiling of the prototype of the MintChip, a digital currency that’s akin to Bitcoin – only this currency was designed by the Royal Canadian Mint, is backed by the Canadian dollar, and has been paired with a credit and debit machine. 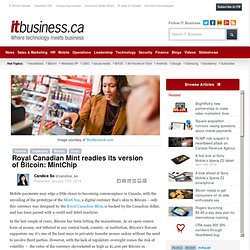 In the last couple of years, Bitcoin has been hitting the mainstream. As an open-source form of money, not tethered to any central bank, country, or institution, Bitcoin’s fiercest supporters say it’s one of the best ways to privately transfer money online without the need to involve third parties. However, with the lack of regulatory oversight comes the risk of volatility – the value of the currency skyrocketed as high as $1,200 per Bitcoin in November 2013, although it was worth just $12 at the beginning of 2013.

Related In April 2012, the Mint announced it’d be launching the MintChip, billing it as a digital currency stored on a microSD card. MintChip Misses the Point of Digital Currency. News - Bitcoin not a currency says Japan government. 7 March 2014Last updated at 02:15 GMT A number of countries have imposed restrictions on transactions in Bitcoins Japan's government said Bitcoin is not a currency but that some transactions using the virtual unit should be taxed. 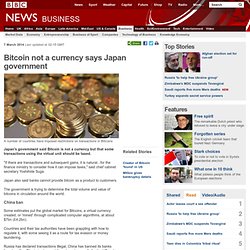 "If there are transactions and subsequent gains, it is natural...for the finance ministry to consider how it can impose taxes," said chief cabinet secretary Yoshihide Suga. Japan also said banks cannot provide bitcoin as a product to customers. The government is trying to determine the total volume and value of bitcoins in circulation around the world. China ban. News - MtGox gives bankruptcy details. 4 March 2014Last updated at 04:12 ET Customers concerned about their Bitcoin holdings travelled to Japan More details have emerged into what led MtGox, one of the largest Bitcoin exchanges, to file for bankruptcy. 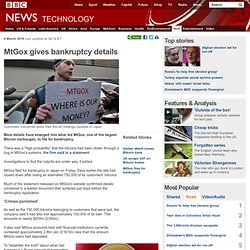 There was a "high probability" that the bitcoins had been stolen through a bug in MtGox's systems, the firm said in a statement. Investigations to find the culprits are under way, it added. The Mt Gox bitcoin scandal is the best thing to happen to bitcoin in years. Mystery of the missing bitcoins: Fate of $365M unknown after major exchange closes. Has $365-million just been stolen, or nothing? 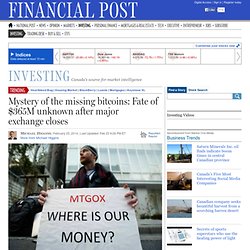 Kolin Burges, a self-styled “crypto-currency trader,” certainly believes he is out more than $300,000 after Mt. Why bitcoin isn't dead yet - Business. It's been a rough month for bitcoin. 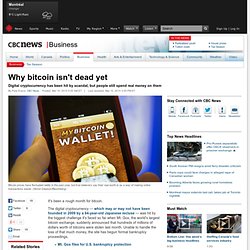 The digital cryptocurrency — which may or may not have been founded in 2009 by a 64-year-old Japanese recluse — was hit by the biggest challenge it's faced so far when Mt. Gox, the world's largest bitcoin exchange, suddenly announced that hundreds of millions of dollars worth of bitcoins were stolen last month. World's first bitcoin ATM opens in Vancouver - Technology & Science. An ATM that converts bitcoins to Canadian dollars and vice versa opened for business in a Vancouver coffee shop today, marking a world first. The kiosk, located inside Waves Coffee House at Howe and Smithe streets in downtown Vancouver, attracted its first customers, along with dozens of people who wanted to see how it worked, shortly after it went live at 9 a.m. The automated teller machine will be operated by Vancouver-based Bitcoiniacs and Nevada-based Robocoin.

They plan to open four more locations across Canada. Customers will need to have their palms scanned in order to exchange up to $3,000 worth of bitcoins per day. Canadian cash can be fed in or taken out from the machine and exchanged for bitcoins on Canada’s VirtEx exchange. Waves Coffee House is one of at least 20 businesses in Vancouver that currently accept bitcoins. A Special Report on the Future of Money. To secure your bitcoins, print them out. By Quentin Fottrell Getty Images Bitcoin was created to provide an anonymous, digital currency free from government control or physical existence. 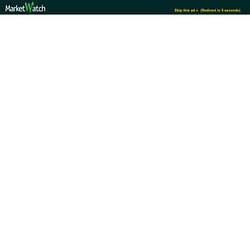 But after the implosion of bitcoin exchange Mt. MIT Report Finds Bitcoin More Likely to be Spent Than Hoarded. Newly released research from the MIT Technology Review, a faculty-run university magazine, suggests that new bitcoins are increasingly being spent, not hoarded, by users after purchase. 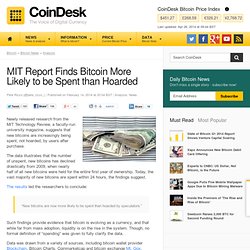 The data illustrates that the number of unspent, new bitcoins has declined drastically from 2009, when nearly half of all new bitcoins were held for the entire first year of ownership. Today, the vast majority of new bitcoins are spent within 24 hours, the findings suggest. Bitcoin: Bitten. What a Shrem CHARLIE SHREM was a featured speaker at a gathering of Bitcoin enthusiasts in Miami on January 26th. 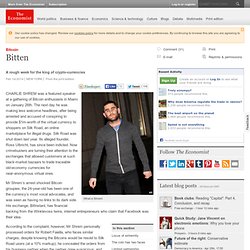 The next day he was making less welcome headlines, after being arrested and accused of conspiring to provide $1m-worth of the virtual currency to shoppers on Silk Road, an online marketplace for illegal drugs. Silk Road was shut down last year. Its alleged founder, Ross Ulbricht, has since been indicted. Now crimebusters are turning their attention to the exchanges that allowed customers at such black-market bazaars to trade traceable old-economy currencies for near-anonymous virtual ones. The Bitcoin Bubble and the Future of Currency — Money & Banking. A few days ago, the value of all the bitcoins in the world blew past $1 billion for the first time ever. 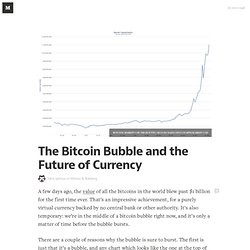 That’s an impressive achievement, for a purely virtual currency backed by no central bank or other authority. It’s also temporary: we’re in the middle of a bitcoin bubble right now, and it’s only a matter of time before the bubble bursts. There are a couple of reasons why the bubble is sure to burst. The first is just that it’s a bubble, and any chart which looks like the one at the top of this post is bound to end in tears at some point.

But there’s a deeper reason, too — which is that bitcoins are an uncomfortable combination of commodity and currency. Ben Bernanke’s letter to Congress: Bitcoin and other virtual currencies “may hold long-term promise” America’s top central banker has given his cautious blessing to bitcoin, the virtual currency that famously requires no central bank. In a letter ahead of today’s congressional hearings, US Federal Reserve chairman Ben Bernanke mostly distanced himself from virtual currencies, saying the Fed “does not necessarily have authority to directly supervise or regulate these innovations or the entities that provide them to the market.” But he also said that bitcoin and its ilk “may hold long-term promise, particularly if the innovations promote a faster, more secure and more efficient payment system.”

Wristband Lets Users Unlock Bitcoin Wallets With Heartbeats. Where there's muck there's bitcoins. Never has the old English expression "where's there's muck there's brass" been more true. For those of you not familiar with those wise words: They come from the northern county of Yorkshire, where "brass" is slang for money, and "muck" is, well, muck. Dirty work can yield riches. That's the task facing James Howell from the Welsh city of Newport, after he threw out a computer hard drive forgetting that it was full of bitcoins that are now worth around $7.5 million, the BBC reports. In Bitcoin's Orbit: Rival Virtual Currencies Vie for Acceptance. Stockholm’s homeless now take credit cards. In Australia, bitcoins can be used to buy a car. The Future of Money in a Mobi-Digital World. By Michael Lee, Founder of Southern African Chapter of the World Future Society; CEO of the ATM Industry Association; Author of Knowing our Future - the startling case for futurology.

What will happen to money, and especially cash, in this new electronic age? Will all money eventually be digitized? Money-laundering rules for virtual currency. With the increasing popularity of online cash, there’s growing concern that virtual currencies bought on the Internet are funding illicit activities. Now, standard banking rules aimed at suspicious dollar transfers will be applied to Web money. Companies that issue or exchange online cash will be regulated like traditional money-order providers, such as Western Union.

Wall Street Journal reports. One of the fastest-growing alternative cash products is Bitcoin, an online currency launched in 2009 that isn't backed by a central bank or controlled by a central administrator. Pay for your Starbucks latte with Square Wallet. Starbucks Coffee Co. began accepting Square's mobile payment app today at about 7,000 U.S. stores, three months after the San Francisco startup landed the game-changing deal. How will you buy dinner in space? PayPal Galactic. Bitcoin takes off in Berlin. BERLIN -- If you visit a bar, cafe or restaurant off the beaten tourist path in Germany's capital city, it's usually best not to count on your credit card. Germany accepts Bitcoin as currency. The German ministry of finance now recognizes Bitcoin, allowing the country to tax users and creators of the virtual currency.

Branson's Virgin Galactic to accept bitcoin for tickets to space. Richard Branson has joined a burgeoning group of entrepreneurs to endorse bitcoin, the decentralized digital currency. Branson announced on his blog Friday that his commercial space startup Virgin Galactic will allow customers to pay for a ticket to space with bitcoins. A female flight attendant from Hawaii has already used bitcoin to buy a Virgin Galactic ticket to space, according to Branson.