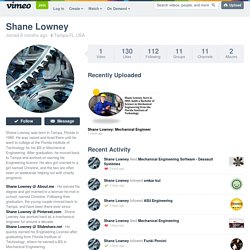 He was raised and lived there until he went to college at the Florida Institute of Technology for his BS in Mechanical Engineering. After graduation, he moved back to Tampa and worked on earning his Engineering license. He also got married to a girl named Christine, and the two are often seen on weekends helping out with charity programs. External Links Shane Lowney @ About.me - He earned his degree and got married to a woman he met in school, named Christine.