What is a style guide and why would I need one? Stylesheets_3.pdf. How To Write A Visual Style Guide for eLearning. Sharebar The most efficient way to achieve consistency in visual design for an eLearning course or presentation is to write a visual style guide. 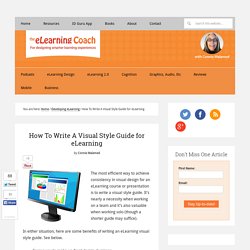 It’s nearly a necessity when working on a team and it’s also valuable when working solo (though a shorter guide may suffice). In either situation, here are some benefits of writing an eLearning visual style guide. See below. Forces you to make up-front design decisionsProvides one visual standard for an entire course, curriculum or companySaves time when you need to look up colors, font sizes, etc.Provides a reference for future courses if you want to re-use the designProvides a way to get buy-in from your client Here are my recommendations for the standards to include in your guide. Do you have additional recommendations? Notes that refer to the table:

Plotting Linear Graphs. Equation Grapher. Description :: All Functions Enter an Equation using the variables x and/or y and an =, press Go: Description It can plot an equation where x and y are related somehow (not just y=...), like these: Examples: 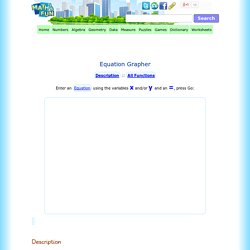 Math Functions and Relations, what makes them different and how to Find the Domain and Range. Wikipedia:Manual of Style/Mathematics. This subpage of the Manual of Style contains guidelines for writing and editing clear, encyclopedic, attractive, and interesting articles on mathematics and for the use of mathematical notation in Wikipedia articles on other subjects. 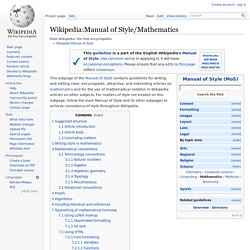 For matters of style not treated on this subpage, follow the main Manual of Style and its other subpages to achieve consistency of style throughout Wikipedia. Suggested structure[edit] Article introduction[edit] The article should start with a short introductory section (often referred to as the lead). The purpose of this section is to describe, define, and give context to the subject of the article, to establish why it is interesting or useful, and to summarize the most important points. In general, the lead sentence should include the article title in bold along with alternative names, establish context by linking to a more general subject, and informally define or describe the subject. The lead section should include, where appropriate: Mathematica. Features[edit] Features of Mathematica include:[7] Interface[edit] The front end, designed by Theodore Gray, provides a GUI, which allows the creation and editing of Notebook documents containing program code with prettyprinting, formatted text together with results including typeset mathematics, graphics, GUI components, tables, and sounds. 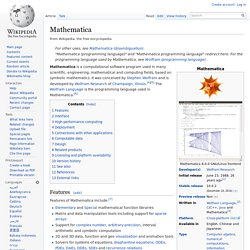 All contents and formatting can be generated algorithmically or interactively edited. Most standard word processing capabilities are supported. MathML. Mathematical Markup Language (MathML) is a mathematical markup language, an application of XML for describing mathematical notations and capturing both its structure and content. 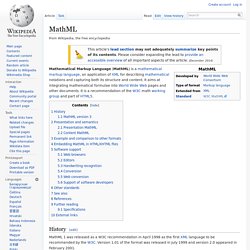 It aims at integrating mathematical formulae into World Wide Web pages and other documents. It is a recommendation of the W3C math working group and part of HTML5. History[edit] MathML 1 was released as a W3C recommendation in April 1998 as the first XML language to be recommended by the W3C. Version 1.01 of the format was released in July 1999 and version 2.0 appeared in February 2001. In October 2003, the second edition of MathML Version 2.0 was published as the final release by the W3C math working group. MathML was originally designed before the finalization of XML namespaces.

MathML version 3[edit] Version 3 of the MathML specification was released as a W3C Recommendation on 20 October 2010. The development of MathML 3.0 went through a number of stages. Writingman.pdf. Tb54becc.pdf. Coes_equation_guidelines.pdf. Typesetting-standards.pdf. Tools - Math Working Group. Many browsers support MathML and support in math&science applications is ubiquitous. 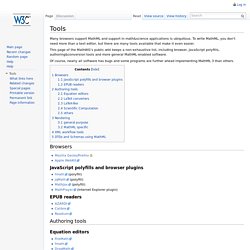 To write MathML, you don't need more than a text editor, but there are many tools available that make it even easier. This page of the MathWG's public wiki keeps a non-exhaustive list, including browser, JavaScript polyfills, authoring&conversion tools and more general MathML-enabled software. Of course, nearly all software has bugs and some programs are further ahead implementing MathML 3 than others. Browsers JavaScript polyfills and browser plugins fmath (polyfill) jqMath (polyfill) MathJax (polyfill) MathPlayer (Internet Explorer plugin) EPUB readers Authoring tools Equation editors LaTeX converters LaTeX-like Scientific Computation others Rendering general purpose. 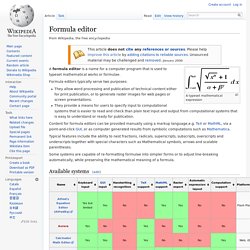 Formula editors typically serve two purposes: They allow word processing and publication of technical content either for print publication, or to generate raster images for web pages or screen presentations.They provide a means for users to specify input to computational systems that is easier to read and check than plain text input and output from computational systems that is easy to understand or ready for publication.

Content for formula editors can be provided manually using a markup language,e.g. TeX or MathML, via a point-and-click GUI, or as computer generated results from symbolic computations such as Mathematica. Typical features include the ability to nest fractions, radicals, superscripts, subscripts, overscripts and underscripts together with special characters such as Mathematical symbols, arrows and scalable parentheses.