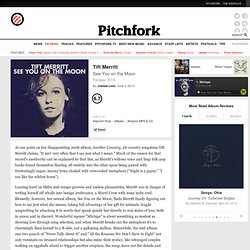 " Much of the reason for that record's mediocrity can be explained by that line, as Merritt's willowy voice and limp folk-pop hooks found themselves floating off entirely into the ether upon being paired with frustratingly vague, moony lyrics choked with overcooked metaphors ("Night is a gypsy;" "I ran like the wildest horse").

Leaning hard on blithe mid-tempo grooves and useless pleasantries, Merritt was in danger of writing herself off wholly into benign irrelevance, a Sheryl Crow with some indie cred. Tift.Merritt-See.You.On.The.Moon-2010-(Retail)-MJN (download tor. Saint Etienne sur MySpace Music - Ecoute gratuite de MP3, Photos. Saint Etienne: Tiger Bay / Finisterre. Many great pop songs can be said to have their own personality. 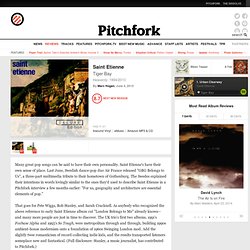 Saint Etienne's have their own sense of place. Last June, Swedish dance-pop duo Air France released "GBG Belongs to Us", a three-part multimedia tribute to their hometown of Gothenburg. The Swedes explained their intentions in words lovingly similar to the ones they'd used to describe Saint Etienne in a Pitchfork interview a few months earlier: "For us, geography and architecture are essential elements of pop. " That goes for Pete Wiggs, Bob Stanley, and Sarah Cracknell.

As anybody who recognized the above reference to early Saint Etienne album cut "London Belongs to Me" already knows-- and many more people are just in time to discover. Faster than you could say "Live Forever", though, there went the neighborhood. Tiger Bay is sort of Saint Etienne's best album. No matter. The rest of the album brilliantly explores this crossroads between pre-modern, modern, and ultramodern. Where were we? Saint Etienne - Tiger Bay. Saint Etienne - Finisterre (2002. Teenage fanclub sur MySpace Music - Ecoute gratuite de MP3, Phot. 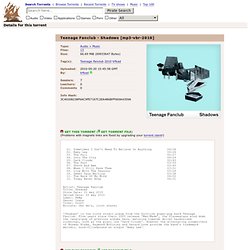 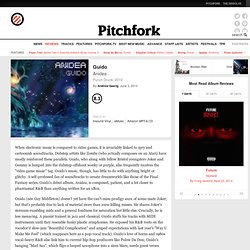 Dubstep artists like Zomby (who actually composes on an Atari) have mostly reinforced these parallels. Guido, who along with fellow Bristol youngsters Joker and Gemmy is lumped into the dubstep-offshoot wonky or purple, also frequently receives the "video game music" tag. Wild Nothing sur MySpace Music - Ecoute gratuite de MP3, Photos. Wild Nothing: Gemini. Wild Nothing - Gemini [2010] 256 kbps. NAKED ON THE VAGUE sur MySpace Music - Ecoute gratuite de MP3, P. Naked on the Vague: Heaps of Nothing. Naked on the Vague's second album isn't just Heaps of Nothing-- it's mountains of non-existent stuff, a landfill of noisy cacophony. 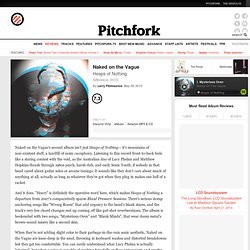 Listening to this record front-to-back feels like a staring contest with the void, as the Australian duo of Lucy Phelan and Matthew Hopkins thrash through 1960s psych, harsh dub, and early Sonic Youth, if nobody in that band cared about guitar solos or arcane tunings. It sounds like they don't care about much of anything at all, actually as long as whatever they've got when they plug in makes one hell of a racket. And it does. "Heavy" is definitely the operative word here, which makes Heaps of Nothing a departure from 2007's comparatively sparse Blood Pressure Sessions. There's serious stomp anchoring songs like "Wrong Room" that add urgency to the band's blank stares, and the track's very few chord changes end up coming off like gut-shot reverberations. 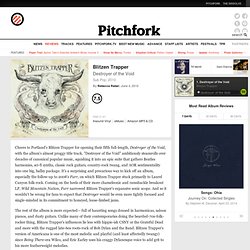 "Destroyer of the Void" ambitiously steamrolls over decades of canonical popular music, squishing it into an epic suite that gathers Beatles harmonies, sci-fi synths, classic rock guitars, country-rock twang, and AOR sentimentality into one big, ballsy package. It's a surprising and precarious way to kick off an album, especially the follow-up to 2008's Furr, on which Blitzen Trapper stuck primarily to Laurel Canyon folk-rock. Coming on the heels of their more chameleonic and ramshackle breakout LP, Wild Mountain Nation, Furr narrowed Blitzen Trapper's expansive sonic scope.

And so it wouldn't be wrong for fans to expect that Destroyer would be even more tightly focused and single-minded in its commitment to honeyed, loose-limbed jams. If anything, the record could use more prog pomp. Blitzen Trapper - Destroyer of the Void - 2010 (rhsiv) (320) (do. Tame Impala sur MySpace Music - Ecoute gratuite de MP3, Photos e. Tame Impala: Innerspeaker. From the Vines to Wolfmother to Jet, recent Aussie rock exports have been painfully indebted to arena rock-- quick to recycle a sound but rarely succeeding in revitalizing it. 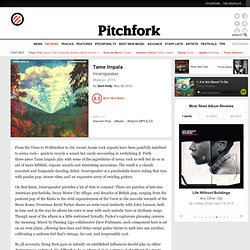 Perth three-piece Tame Impala play with some of the ingredients of arena rock as well but do so in aid of more leftfield, organic sounds and interesting excursions. The result is a cleanly executed and frequently dazzling debut: Innerspeaker is a psychedelia-heavy outing that toys with paisley pop, stoner vibes, and an expansive array of swirling guitars. On first listen, Innerspeaker provides a lot of dots to connect: There are patches of late-60s American psychedelia, buzzy Motor City riffage, and decades of British pop, ranging from the pastoral pop of the Kinks to the vivid expansiveness of the Verve to the narcotic warmth of the Stone Roses.

By all accounts, fixing their gaze so intently on established influences should play as either disingenuous or forced. Tame Impala - Innerspeaker (MP3, 320kbps) [2010] The Ponys: Deathbed +4 EP. Late last year, The Chicago Reader ran a story hailing the Ponys' return to the live stage. 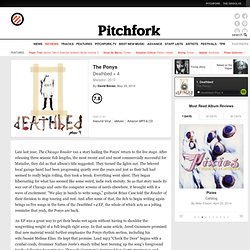 After releasing three seismic full-lengths, the most recent and and most commercially successful for Matador, they did as that album's title suggested: They turned the lights out. The beloved local garage band had been progressing quietly over the years and just as their ball had seemed to really begin rolling, they took a break. Everything went silent. They began hibernating for what has seemed like some weird, indie rock eternity. So as that story made its way out of Chicago and onto the computer screens of nerds elsewhere, it brought with it a wave of excitement. An EP was a great way to get their beaks wet again without having to shoulder the songwriting weight of a full-length right away. Traditionally, the Ponys have been devout frontloaders. "Pop Culture (Revisited)" ensures there's no lull in its wake. The Ponys. The Ponys - Turn The Lights Out [2007] [Rock] (download torrent) Redhooker sur MySpace Music - Ecoute gratuite de MP3, Photos et. 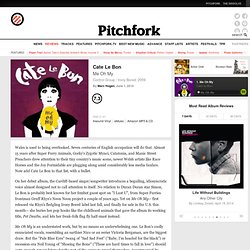 Seven centuries of English occupation will do that. Almost 15 years after Super Furry Animals, Gorky's Zygotic Mynci, Catatonia, and Manic Street Preachers drew attention to their tiny country's music scene, newer Welsh artists like Race Horses and the Joy Formidable are plugging along amid considerably less media fanfare. Now add Cate Le Bon to that list, with a bullet. On her debut album, the Cardiff-based singer/songwriter introduces a beguiling, idiosyncratic voice almost designed not to call attention to itself. No relation to Duran Duran star Simon, Le Bon is probably best known for her fembot guest spot on "I Lust U", from Super Furries frontman Gruff Rhys's Neon Neon project a couple of years ago. Me Oh My is an understated work, but by no means an underwhelming one. ACTIVE CHILD sur MySpace Music - Ecoute gratuite de MP3, Photos. 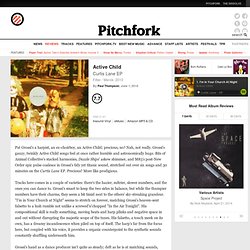 Nah, not really. Grossi's gauzy, twinkly Active Child songs feel at once rather humble and astronomically huge. Bits of Animal Collective's stacked harmonies, Dazzle Ships' askew shimmer, and M83's post-New Order epic pulse coalesce in Grossi's tidy yet titanic sound, stretched out over six songs and 30 minutes on the Curtis Lane EP. Precious? More like prodigious. Robyn sur MySpace Music - Ecoute gratuite de MP3, Photos et clip. Robyn: Body Talk Pt. 1. "I'm always going to feel like this person on the outside looking in," Robyn recently told Popjustice. The Swedish singer and songwriter has no fear of pop: A platinum seller in her own country, Robyn cracked the Billboard top 10 in the late 1990s working with famed teen-pop producer Max Martin. As the daughter of a couple who ran an independent theater company, however, Robin Miriam Carlsson is also a woman who enjoys doing things her own way.

Robyn [Body.Talk Pt. 1][2010] Robyn [Body.Talk Pt. 1][2010]Mp3@VBR.NeRoZ Type: TRASH KIT sur MySpace Music - Ecoute gratuite de MP3, Photos et. Trash Kit: Trash Kit. Over the past couple of years, we've heard a lot of new indie rock bands playing charming, low-tech music like the last 10 years-- or 20, or 30 years-- never happened: Vivian Girls, Real Estate, the Pains of Being Pure at Heart, etc. Some of these bands try to take their old influences in new directions, and some don't bother. (Now that I'm thinking about retro, I'm thinking about Folgers Coffee ads: Tonight, we're secretly replacing this noisy cassette-label band from the mid-80s with something that came out last week-- let's see if people know the difference, or if they care.)

Trash Kit are three British girls who are single-mindedly faithful to a very specific style born in the late 1970s: small-scale, distortion-free punk like the Slits and the Raincoats. Onra "Long Distance" out now on Itunes sur MySpace Music - Ecout. Onra: Long Distance. If I didn’t know better, I'd think that Onra's Long Distance was conceived, recorded, and mastered just yesterday. The Parisian producer's latest is that much in touch with some of electronic music's more prevalent trends of the moment: broken beats, woozy aural effects, and the lush sounds of vintage funk and R&B, all filtered through hip-hop's rhythmic, lyrical bounce.

Which isn't to say that Onra is merely trend-hopping; if anything, the stylistic evolution of Long Distance is more of a logical extension from his already established sound. Ariel Pink’s Haunted Graffiti sur MySpace Music - Ecoute gratuit. Ariel Pink's Haunted Graffiti: Before Today. Most people who follow Ariel Pink were introduced to him by 2004's The Doldrums, the first non-Animal Collective release on that band's Paw Tracks label.

Here we go magic sur MySpace Music - Ecoute gratuite de MP3, Pho. Here We Go Magic: Pigeons. Listeners crave tidy narratives. Thus, when "Collector", the second track from Here We Go Magic's second LP and first as a full band, Pigeons, began to make the blog rounds, there was quite a bit of chatter about the album possibly being the band's-- and its bandleader, Luke Temple's-- breakout moment. Makes sense: It's hard to listen to "Collector"-- one of the finest pieces of post-Sufjan Stevens chamber pop-- and not get excited about something. Can anyone be blamed for hoping that the rest of the record would endlessly vibe on that theme? Pigeons by Here We Go Magic [2010] Full Album (download torrent) Casiokids sur MySpace Music - Ecoute gratuite de MP3, Photos et. Casiokids: Topp Stemning På Lokal Bar. Despite its casual feel-- the unusually edifying title means "great vibe at a local bar"-- Casiokids' U.S. debut has been ages in the making.

One of its most striking songs is "Fot I Hose", a dance track with infectious bass synths scudding over a sizzling rhythm section. It's the song that turned me on to Norway's Casiokids two years ago, when it appeared on a sampler CD for the 2008 Øya Festival in Oslo. Emeralds: Does It Look Like I'm Here?

Describing Emeralds' music feels a little like capping that underwater oil spill must: how do you get your hands around this stuff? The Cleveland trio may favor methodical cadences in their music, but their releases come fast and furious. According to Discogs.com, they've put out around 40 releases in just four years, most of them CDRs and cassettes. Emeralds - Does Look Like Im Here [2010] VBR (download torrent) The Gaslight Anthem sur MySpace Music - Ecoute gratuite de MP3, Album Reviews: The Gaslight Anthem: American Slang. Where so many young rock bands struggle to liberate themselves from the tyranny of influence, the Gaslight Anthem simply embrace it.