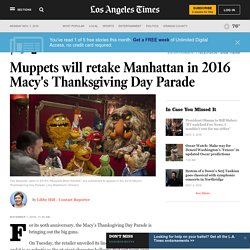 On Tuesday, the retailer unveiled its lineup for the 2016 parade and it is as eclectic as the 16 giant character balloons that will loom over Herald Square on Nov. 24. The event will host not one, but two sets of Muppets, with Kermit and his crew kicking off the parade with a musical number and Big Bird and the “Sesame Street” team appearing later in the parade. Among the human participants will be legendary crooner Tony Bennett, singer-songwriters Sarah McLachlan and Regina Spektor and soul artist Aloe Blacc. 2016 Macy's Thanksgiving Day Parade Visitors Guide. Updated October 04, 2016. 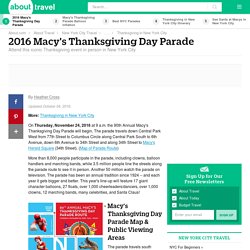 More: Thanksgiving in New York City On Thursday, November 24, 2016 at 9 a.m. the 90th Annual Macy's Thanksgiving Day Parade will begin. The parade travels down Central Park West from 77th Street to Columbus Circle along Central Park South to 6th Avenue, down 6th Avenue to 34th Street and along 34th Street to Macy's Herald Square (34th Street). (Map of Parade Route) More than 8,000 people participate in the parade, including clowns, balloon handlers and marching bands, while 3.5 million people line the streets along the parade route to see it in person. Continue reading below our video. Macy’s Thanksgiving Day Parade Balloons Take Test Flight At Citi Field.

NEW YORK (CBSNewYork) — The balloons that will be flown during the 90th annual Macy’s Thanksgiving Day Parade took a test flight at Citi Field on Saturday. 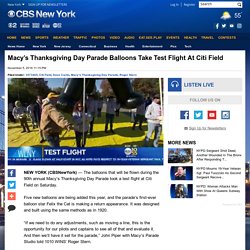 Five new balloons are being added this year, and the parade’s first-ever balloon star Felix the Cat is making a return appearance. It was designed and built using the same methods as in 1920. “If we need to do any adjustments, such as moving a line, this is the opportunity for our pilots and captains to see all of that and evaluate it. And then we’ll have it set for the parade,” John Piper with Macy’s Parade Studio told 1010 WINS’ Roger Stern. It also served as an opportunity for the balloon handlers to practice. “Just got to hold on to the tension and be aware of what you’re doing,” one said. Nearly 2,000 handlers will take part in the parade, with roughly 70 assigned to each balloon. Mike Baumrind became a balloon pilot after spending 10 years volunteering.

Regardless, his daughter looks forward to getting things off the ground. Bye Bye Balloons. The First Macy’s Thanksgiving Day Parade - History in the Headlines. Every year more than 3.5 million New Yorkers line the route of the Macy’s Thanksgiving Day Parade while 50 million television viewers tune in to watch the holiday pageant of giant character balloons, floats, celebrities and marching bands. 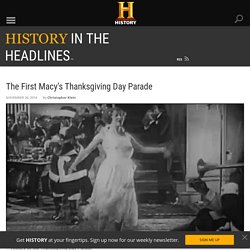 Although it is now as much of an American tradition as turkey and stuffing, the first Macy’s parade on Thanksgiving morning of 1924 was a much more humble affair that bore the name of an altogether different holiday. As the United States prospered during the Roaring Twenties, so did New York City’s iconic department store—Macy’s. After going public in 1922, R. H. Macy & Co. started to acquire competitors and open regional locations. 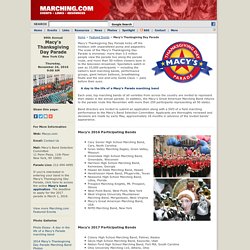 The scale of the Macy's Thanksgiving Day Parade is immense: more than 3.5 million people view the parade live along the parade route, and more than 50 million viewers tune in to the television broadcast. Spectators watch in awe as 10,000 participants — including the nation's best marching bands, performance groups, giant helium balloons, breathtaking floats and the one-and-only Santa Claus — pass before their eyes. A day in the life of a Macy's Parade marching band Each year, top marching bands of all varieties from across the country are invited to represent their states in the annual parade. In addition, the Macy's Great American Marching Band returns to the parade route this November with more than 250 participants representing all 50 states. Band directors are invited to submit an application along with a DVD of a field marching performance to the Macy's Band Selection Committee. 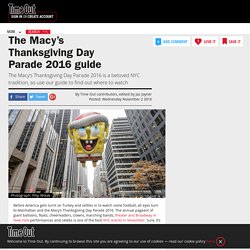 The annual pageant of giant balloons, floats, cheerleaders, clowns, marching bands, theater and Broadway in New York performances and celebs is one of the best NYC events in November. Sure, it’s fun to watch in your PJs, but there’s nothing like watching the procession in person. Use our guide to examine the parade route and get a sneak peek of this year’s balloons and floats (or watch the pre-Thanksgiving balloon inflation). We’ll also tell you about nearby restaurants open on Thanksgiving as well as bars and festive New York attractions to check out for the full NYC experience. For a guided tour of the Thanksgiving Day Parade click here. RECOMMENDED: Full guide to Thanksgiving in NYC. Macy's Thanksgiving Day Parade Through the Years Photos. Macy's Thanksgiving Day Parade NYC. *Terms & Conditions: Offers, promotions and rates subject to change and may vary based upon date, length of stay and other factors. 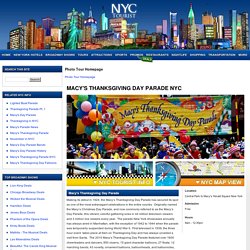 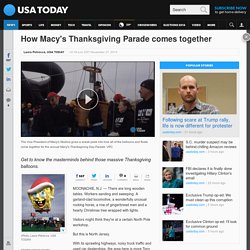 VPC MOONACHIE, N.J. — There are long wooden tables. Workers sanding and sweeping. A garland-clad locomotive, a wonderfully unusual rocking horse, a row of gingerbread men and a hearty Christmas tree wrapped with lights. Visitors might think they're at a certain North Pole workshop. But this is North Jersey. With its sprawling highways, noisy truck traffic and used car dealerships, the area here is more Tony Soprano than Santa Claus. A large green dragon with outspread wings dangles over welders, woodworkers and 27-foot orca whales.