Papillon hall. Old Pamp and the Slippers of Papillon Hall. 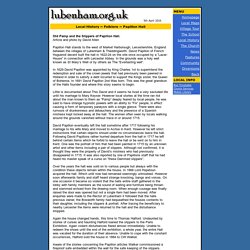 Article and photo by David Allen Papillon Hall stands to the west of Market Harborough, Leicestershire, England between the villages of Lubenham & Theddingworth. David Papillon of French Huguenot decent built the hall in 1622-24 on the site once occupied by a “Lazar-House” in connection with Leicester Abbey. In the grounds was a holy well known as St Mary’s Well or by others as The “Everlasting well”. In 1629 David Papillon was appointed by King Charles 1st to superintend the redemption and sale of the crown jewels that had previously been pawned in Holland in order to satisfy a debt incurred to support the Kings sister, the Queen of Bohemia.

Little is documented about This David and it seems he lived a very secluded life until his marriage to Mary Keyser. David Papillon eventually left the hall sometime after 1717 following his marriage to his wife Mary and moved to Acrise in Kent. Again the house changed hands, this time to Thomas Halford. Ncealed Shoes - an article by June Swann - Apotropaios.

Dorset Survey - Apotropaios. Footsteps. Shoes, culture, and history. By Cathy Newman At first sight, the 17th-century leather shoe slashed into strips sent a chill through June Swann, then Keeper of the Boot and Shoe Collection at the Northampton Museum in England. 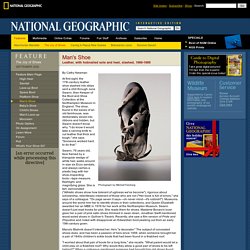 The shoe, found in the eaves of an old farmhouse, was deliberately sliced into ribbons and hidden, but Swann doesn't know why. "I do know it would take a carving knife to cut leather that thick and tough," she says. "Someone worked hard to do that. " Swann, 76 years old, face framed by a triangular wedge of white hair, walks around in size six Ecco sandals, and always carries a plastic bag with her shoe-inspecting tools—tape measure, flashlight, and magnifying glass. Manolo Blahnik doesn't interest her. "I worried about that pair of boots for a long time," she recalls. "Concealing shoes is tied up with superstition," she says, "but I still don't have the answers. " Perhaps, suggests June Swann, the secret must remain one.

No6 1990. Concealed shoes: Australian settlers and an old superstition. Items of clothing found concealed in Australian buildings tell the story of a battle waged by early settlers with the evil spirits they feared were lying in wait in their unfamiliar surroundings. 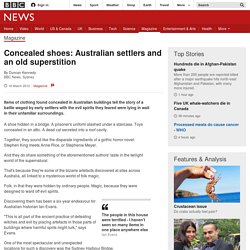 A shoe hidden in a bridge. A prisoner's uniform stashed under a staircase. Toys concealed in an attic. A dead cat secreted into a roof cavity. Together, they sound like the disparate ingredients of a gothic horror novel: Stephen King meets Anne Rice, or Stephenie Meyer. And they do share something of the aforementioned authors' taste in the twilight world of the supernatural. That's because they're some of the bizarre artefacts discovered at sites across Australia, all linked to a mysterious world of folk magic. Northampton Museums. People often hid old boots and shoes in chimneys and walls to bring good luck to their houses and to ward off evil spirits. 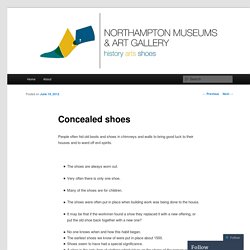 The shoes are always worn out.Very often there is only one shoe.Many of the shoes are for children.The shoes were often put in place when building work was being done to the house.It may be that if the workmen found a shoe they replaced it with a new offering, or put the old shoe back together with a new one? No one knows when and how this habit began. Concealed shoes. Concealed shoes hidden in the fabric of a building have been discovered in many European countries, as well as in other parts of the world, since at least the early modern period. 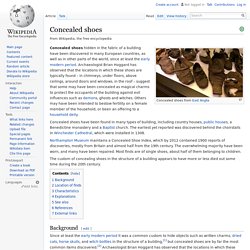 Archaeologist Brian Hoggard has observed that the locations in which these shoes are typically found – in chimneys, under floors, above ceilings, around doors and windows, in the roof – suggest that some may have been concealed as magical charms to protect the occupants of the building against evil influences such as demons, ghosts and witches. Others may have been intended to bestow fertility on a female member of the household, or been an offering to a household deity. Concealed shoes have been found in many types of building, including country houses, public houses, a Benedictine monastery and a Baptist church. The earliest yet reported was discovered behind the choirstalls in Winchester Cathedral, which were installed in 1308. 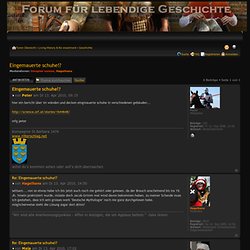