Zafar A Khan. Zafar Karachiwala. Zafar Ehsaan. Zafar Hai. Zafar Rahi. Zafar Gorakhpuri. Zafar Khursheed. Zack Knight. Zachary Coffin. Zach Cowan. Zabyn Khan. Z D Lari. Z Pawar. Latest News. When the handsome chocolate faced actor joined the film industry ten years back, the very first words that reviewed him was, ‘ Ranbir Kapoor is a Promising Talent , True to the remark after his debutant in Bollywood industry a decade back the actor has achieved a lot and has left a mark behind in the hearts of his fans. Being a successful actor , 2017 marks a decade of ‘Promising talent’, these are the first words every debutant in Bollywood wishes to hear after doing his or her first film.

Every year there are many actors, filmmakers, technicians who start with their journey in this exciting world of films especially the Hindi film industry (Bollywood). But, only a few of them achieve a mark and leave behind a deep impression in the hearts of their fans. Latest News. We present you the Powerhouse Women in the Industry who have been successful and proved their guts and spirit not only in the Reel Life but also in their real life. 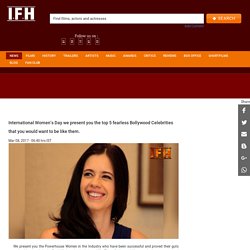 Those Bollywood Women who have represented India on a Global platform and have inspired us. Priyanka Chopra. Latest News. The super hit Bollywood Films coming up with interesting ideas to shape up Sequel 3. 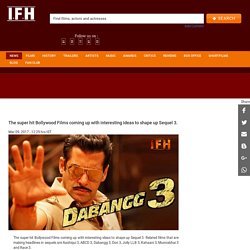 Related films that are making headlines in sequels are Aashiqui 3, ABCD 3, Dabangg 3, Don 3, Jolly LLB 3, Kahaani 3, Munnabhai 3 and Race 3. The recent trend is coming up with sequels with interesting story with the third installment of the films . Converting the film as a franchise, the producers are re-launching the prequel film in two and three parts. Latest News. The filmmaker Rajkumar Santoshi recently is fighting a legal battle regarding a cheque bounce case filed by a real estate proprietor turned producer Dhanraj and Anil Jethani . 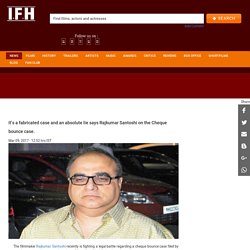 Rajkumar Santoshi says it’s a fabricated case and an absolute lie and that Jethani owes him money and not the other way around and that they are gaining publicity and spoiling his reputation . He says, if they are fighting for the truth they should approach the judiciary system and not the media for justice. Latest News. Follow us on : Varun Dhawan always wanted to work with Shoojit Sircar Mar 09, 2017 - 01:11 hrs IST With the upcoming film, ‘Badrinath Ki Dulhania’ set to release on Friday, actor Varun Dhawan is all excited and is looking forward to its release and also has signed a new films Judwaa 2 s with Shoojit Sircar. 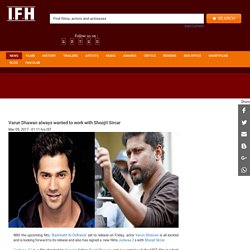 Latest News. Filmmaker Neeraj Pandey , the producer of his spy thriller film of 2015, ‘ Baby ’ is positive again to roll on his new film, ‘ Naam Shabana ’ for which he has been very confident and positive. 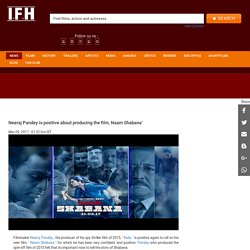 Pandey who produced the spin-off film of 2015 felt that its important now to tell the story of Shabana. He shared the idea with his crew who are going to play the pivotal role in the film and the story has struck them that they are all very positive and inquisitive as well for the film and how to go about it. Director Shivam who also teamed up with the filmmaker for ‘ Baby ’ feels it would be a threat for the audience who have liked the film ‘ Baby ’ . Latest News. Karan Johar’s most recent production, Badrinath Ki Dulhania set to release tomorrow the 10th March 2017 has generated curiosity since it was first announced. 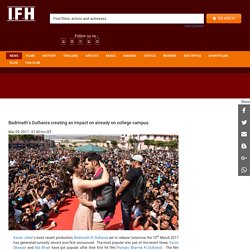 The most popular star pair of the recent times, Varun Dhawan and Alia Bhatt have got popular after their first hit film,’Humpty Sharma Ki Dulhania’ . The film which was also directed by Shashank Khaitan, has already gained its popularity among the youth . ‘Badrinath Ki Dulhania’ is a much anticipated film among the youth and in keeping in tow there’s been a demand from their fan clubs, campus after the filmmaker and the crew had a round of promotional tours across India. Varun Dhawan and Alia Bhatt visited two colleges in Delhi and Lucknow , a school in Kolkotta and Jaipur among many others during their promotional city tours and the stars are simply overwhelmed by the response they have received. Latest News. The star attractions are Alia Bhatt, Vaani Kapoor and Angad Bedi at the upcoming fashion week at the Jawaharlal Nehru Stadium which will commence from March 15th 2017 and will also feature some of the current favourites like Aditi Rao Hydari , Athiya Shetty and Sakshi Tanwar after her success in, ‘Dangal’ . 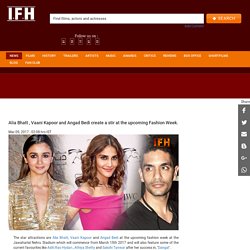 Alia Bhatt will be seen walking the ramp with Namrata Joshipura’s designs while Vaani Kapoor will showcase the designs by Pankaj and Nidhi and Rina Dhaka while Sakshi Tanwar will walk the ramp for one of the sponsored length with an Anju Modi designs. Angad Bedi and Nora Fatehi will also walk the ramp on March 18th for the designer Pawan Sachdeva at the Men’s fashion show. Latest News. The perfect picture that makes your hearty mushy and your eyes moist ! 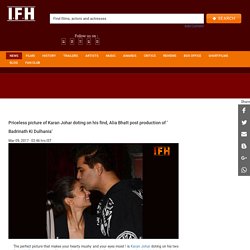 Is Karan Johar doting on his two finds Alia Bhatt and Varun Dhawan after the star pair are all set to be on screen for the third time together in Karan Johar’s production ‘ Badrinath Ki Dulhania ’ . The filmmaker got emotional and declared them as beneficiaries in his Will and the proud mentor to the two couldn’t be more happier as he perched a kiss on Alia Bhatt’s forehead at the recent screening of the film . Latest News. Aamir Khan a game changer who broke all records recently with his Box office records with his most recent release ‘ Dangal ’ and set up a new benchmark with the number game. 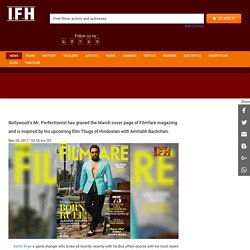 Ahead of his birthday this month on March 14th, Filmfare unveiled a special birthday edition for the star and got the actor to do a cover page photograph . Khan is seeing sporting a very different look with checkered pants and a turquoise jacket looking as charming as ever while he sports the handlebar moustache and a beard, the actor is playing it smart and has his own rules that nobody else can judge…! The picture coincides with the actor beginning his shoot along with Amitabh Bachchan for his forthcoming flick, ‘ Thugs of Hindostan ' under Yashraj Films Banner.. Latest News. The first poster of Begum Jaan , Vidya Balan starrer film was released a few days ago. 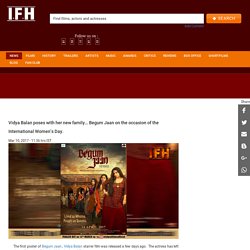 The actress has left the audience bewildered with her looks to kill. The makers have revealed the second poster and its equally vicious look of Vidya Balan and does not just feature the leading lady but also the entire film cast. Latest News. Latest News. The Rajkumar Hirani directed Dutt Biopic is heading for its completion and is taking Ranbir Kapoor places. The actor has arrived at Bhopal at the cells of the Bhopal Central Jail with the director .

They arrived early Wednesday morning to continue with the shooting and the jail sequence for the upcoming biopic film. Anushka Sharma will be essaying the role of journalist and is scheduled to arrive on the sets for her part of the shoot despite her own commitments of promotion of ‘ Phillauri’. Latest News. The recent hot news is Bandra-Vasai local commuters might just get a glimpse of their current hot favourite hero in a hoodie and with a riding face mask!! Yes its none other than Tiger Shroff who is shooting for his climax action sequence for his film, ‘ Munna Michael ’ who prefers to travel by the local train and has forsaken his swanky set of wheels for the past few days. News buzz is that the actor is seen commuting by the local early evening before the rush hour for the past 10 days . On Wednesday , Tiger Shroff shared his video of how he managed to do this , without being noticed by the commuters , sporting in loose sweatpants, a blue hoodie, a riding face mask and flip flops, the most unassuming personality , the actor revealed his process of going undercover and getting ignored!!!

Latest News. Shraddha Kapoor who turned 30 on 3rd March 2017, flew off to Europe on a vacation with her friend after she had a pre-birthday bash with her family back home and close friends at her Juhu residence. Her travel plan included Berlin and Prague. The childlike actress Shraddha Kapoor deserves the good time with her close group of friends as she shared the group picture with her gang, #Birthdayholiday #Fish Birthdays. Latest News. Golmaal Again went on floors but in the fourth installment of Golmaal franchise the leading star Ajay Devgan was missing .The ‘ Shivaay ’ star is busy shooting for ‘ Baadshaho ’ in Rajasthan and will join the team once he is done with the shooting . The new outing of Golmaal series is a complete laugh a riot and the audience are simply going to love this film like they did with the earlier prequels… With the fourth installment promises a lot more what with a huge star cast that includes Parineeti Chopra, Tabu, Neil Nitin Mukesh, Sanjay Mishra and Johny Lever along with the original star cast, Ajay Devgan, Tusshar Kapoor, Arshad Warsi, Shreyas Talpade and Kunal Khemu.