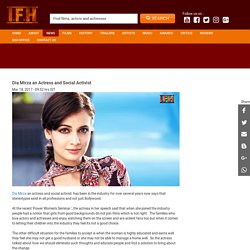 At the recent 'Power Women's Seminar ', the actress in her speech said that when she joined the industry people had a notion that girls from good backgrounds do not join films which is not right. The families who love actors and actresses and enjoy watching them on the screen and are ardent fans too but when it comes to letting their children into the industry they feel its not a good choice. The other difficult situation for the families to accept is when the woman is highly educated and earns well they feel she may not get a good husband or she may not be able to manage a home well. Latest News. The trailer launch of the film' Baahubali: The Conclusion was held in Mumbai which is said to be bigger and better than the first says director S.S. 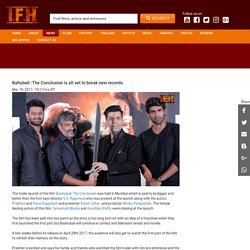 Rajamouli who was present at the launch along with the actors Prabhas and Rana Daggubati and presenter Karan Johar and producer Shobu Yarlagadda. ​ The female leading actors of this film, Tamannah Bhatia and Anushka Shetty were missing at the launch. The film has been split into two parts as the story is too long and not with an idea of a franchise when they first launched the first part but Baahubali will continue in comics and television serials and novels. ​ A few weeks before its release on April 28th 2017, the audience will also get to watch the first part of the film to refresh their memory on the story .