Bhavin Sapariya is an IT consultant by profession and is working with I-PhoneAppDeveloper.com, a leading Android apps development company. He has more than 6 years of experience in developing and implementing marketing strategies.

Smart Development Tactics for a Successful iPhone Application - I-PhoneAppDeveloper. Today, in the age of smartphones, every person aspires to own an iPhone. 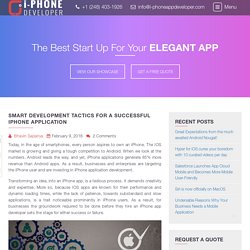 The IOS market is growing and giving a tough competition to Android. When we look at the numbers, Android leads the way, and yet, iPhone applications generate 85% more revenue than Android apps. As a result, businesses and enterprises are targeting the iPhone user and are investing in iPhone application development. Transforming an idea, into an iPhone app, is a tedious process. Rejoice As Android Studio 2.1 IDE Makes Android N Development Easy - I-PhoneAppDeveloper. After marshmallow, a new android mobile operating system with a codename Android “N” is already in the offing. 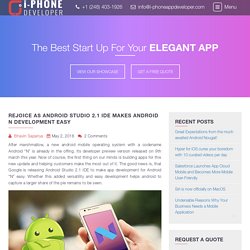 Its developer preview version released on 9th march this year. Now of course, the first thing on our minds is building apps for this new update and helping customers make the most out of it. The good news is, that Google is releasing Android Studio 2.1 IDE to make app development for Android “N” easy. Whether this added versatility and easy development helps android to capture a larger share of the pie remains to be seen.

After the introduction of IDE 2.0 in January, Android recently rolled out an upgraded version of Android Studio 2.1. Furthermore, Android 2.1 improves the compilation and build times. With these advancements and upgraded tools, developers can build better and empowered apps. Why iPhone App Development Is Popular Like Piping Hot Cakes? - I-PhoneAppDeveloper. Over the years, Android’s position in the market has become stronger. 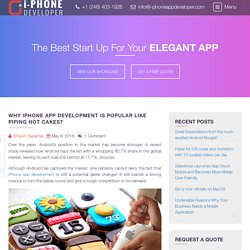 A recent study revealed how Android tops the list with a whopping 80.7% share in the global market, leaving its arch rival iOS behind at 17.7%. (Source) Although Android has captured the market, one certainly cannot deny the fact that iPhone app development is still a potential game changer! It still stands a strong chance to turn the tables round and give a tough competition to its nemesis. Largest app repository focused on a single brand Android sits on the top with around 1.6 million applications in its app store – Google Play, leaving behind Apple with 1.5 million apps. Strong Credibility It cannot be denied that Apple devices guarantee a nearly flawless UI, which other devices fail to do. iOS framework is considered as one of the most sturdy and stable when it is compared to Android device framework.

Is Apple’s Swift the Next Big Thing in Android App Development Sector? - I-PhoneAppDeveloper. Swift programming language has proved a blessing for iOS app developers, and now it is all set to transform the way android application developers build apps. 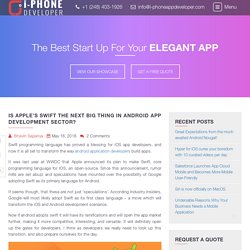 It was last year at WWDC that Apple announced its plan to make Swift, core programming language for IOS, an open-source. Since this announcement, rumor mills are set abuzz and speculations have mounted over the possibility of Google adopting Swift as its primary language for Android. It seems though, that these are not just ‘speculations’. According industry insiders, Google will most likely adopt Swift as its first class language – a move which will transform the iOS and Android development scenarios. Google gets developer-friendly – Updated Firebase extends a unified platform for mobile developers - I-PhoneAppDeveloper.

With mobile devices getting smarter, mobile app development market has been experiencing a drastic shift. 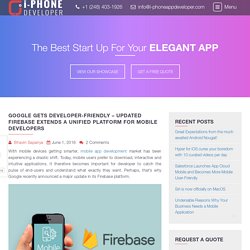 Today, mobile users prefer to download, interactive and intuitive applications. It therefore becomes important for developer to catch the pulse of end-users and understand what exactly they want. Perhaps, that’s why Google recently announced a major update in its Firebase platform. It is believed that with this update, Google is trying to convert Firebase into a unified and comprehensive platform for developing and managing iPhone, Android, and web applications.

Moreover, with this update, Google promises an array of advanced features to help developers create better applications and double up their profit margins. The upgraded Firebase comes with an advanced analytics tool, which helps the developer analyse user behaviour. Above all, Firebase offers bigger and better online storage space, powered by Google Cloud Storage. Great Expectations from the much awaited Android Nougat! - I-PhoneAppDeveloper. Android’s 7.0 initially known by the codename ‘N’ has finally got a name! 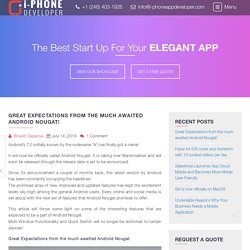 It will now be officially called Android Nougat. It is taking over Marshmallow and will soon be released (though the release date is yet to be announced). Since, its announcement a couple of months back, this latest version by Android has been constantly occupying the headlines! The promised array of new, improved and updated features has kept the excitement levels sky-high among the general Android users. Android N APIs are now final, get your apps ready for Android N! - I-PhoneAppDeveloper. As we put the finishing touches on the next release of Android, which will begin to roll out to consumers later this summer, we’re releasing the 4th Developer Preview of Android N, including the Android N final SDK. 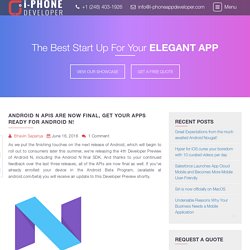 And thanks to your continued feedback over the last three releases, all of the APIs are now final as well. If you’ve already enrolled your device in the Android Beta Program, (available at android.com/beta) you will receive an update to this Developer Preview shortly. Get your apps ready for Android N The final SDK for Android N is now available for download through the SDK Manager in Android Studio. It gives you everything you need to develop and test against the official APIs in the Android N platform. Along with the Android N final SDK, we’ve also updated the Android Support Library to 24.0.0. Publish your apps to alpha, beta or production channels in Google Play. Undeniable Reasons Why Your Business Needs a Mobile Application - I-PhoneAppDeveloper. The rise of mobile applications is undoubtedly one of the most important technological milestones! 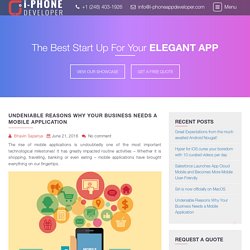 It has greatly impacted routine activities – Whether it is shopping, travelling, banking or even eating – mobile applications have brought everything on our fingertips. While android app development and iPhone app development are highly popular due to the increasing number android and IOS users, Windows too has its fair share of users. The increasing usage of mobile and the tendency of users to prefer using internet while on the go on their mobile devices have forced businesses to go place themselves where they can be found the most.

In fact, many business verticals are increasingly adopting mobile app development to stay relevant in this tech-savvy and competitive world. A large number of them are harnessing the power of mobile applications to augment employee productivity, enhance their deliverance efficiency and even expand their business on a global level. About the Author: Siri is now officially on MacOS - I-PhoneAppDeveloper. In recently concluded WWDC event, Apple announced an array of innovative technologies and gadgets. 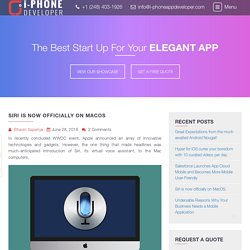 However, the one thing that made headlines was much-anticipated introduction of Siri, its virtual voice assistant, to the Mac computers. With this announcement, the developers’ community was set abuzz, since it is seen as a significant move by Apple. By moving its digital assistant Siri to Mac, Apple eventually opened it for third -party developers. Salesforce Launches App Cloud Mobile and Becomes More Mobile User-Friendly - I-PhoneAppDeveloper. Competition in the mobile app market has reached to an unprecedented level. 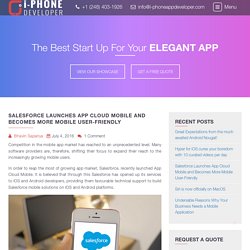 Many software providers are, therefore, shifting their focus to expand their reach to the increasingly growing mobile users. In order to reap the most of growing app market, Salesforce, recently launched App Cloud Mobile. Hyper for iOS cures your boredom with 10 curated videos per day - I-PhoneAppDeveloper. You probably have a bunch of times every day when you have some time left to check up on the best videos from around the Web. But who’s got the time to go looking for them? Enter Hyper, which presents a curated list of 10 videos that changes every day — and it’s all downloaded to your phone. During setup, you pick a couple of things you’re interested in – such as pop culture and tech – and off you go.

All videos are curated daily by the Hyper team and include a mix of short- and long-form videos. The selection contains recent videos and keeps you up-to-date on what’s hot, without having to spend hours browsing Reddit or YouTube. At night when your phone is charging and connected to Wi-Fi, all videos are automatically downloaded to your phone — that means a small data plan or limited cellular signal won’t get in the way of your content anymore. Source : About the Author: Interesting New iOS 10 Features That We Would Like To See - I-PhoneAppDeveloper. iOS 10 is in the offing, and its release is touted to be around the same time when apple releases the iPhone 7. Cut off limit for iOS 9 update is iPhone4 and iPad2, for the latest iOS 10 update, the company might put the cutoff on iPhone 5 and iPad 3. Apple Music to get over beta version, now officially ready for Android - I-PhoneAppDeveloper.

Apple is all set to come up with its new product for the masses as against last year’s buzz of Apple enabling music service to Android users. The news will now bring great relief for those Android users who, going with the buzz last year had subscribed to Apple’s paid music already. Apple coming out of its beta version is giving much reason for them to rejoice and enjoy this new step of Apple. The launch is official as it is now available on play store. Also, the new launch is coupled with the latest release of the Apple Music Andriod update that unveils and brings the app to version 1.0. bringing in quite some changes. With Apple’s latest Android app, mobile app development excitedly enters a new reforming stage. With Apple music for Android, one can see interesting changes on the scene such as unnamed performances, a boost in equalizer settings, stability improvements, an enhanced playback and much more. Emerging Mobile Apps Industry Ushers Growth Of Economy - I-PhoneAppDeveloper.

Mobile technology has been one of the important reason for digitalization of world. The fact is that people have access to mobile phones more than bank account, electricity or even clean drinking water system. Mobile technology is improving day by day in terms of affordability, functionality and extending network coverage in rural areas also.