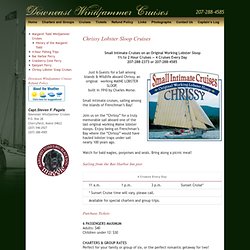 Small intimate cruises, sailing among the islands of Frenchman’s Bay! Join us on the “Chrissy” for a truly memorable sail aboard one of the last original working Maine lobster sloops. Enjoy being on Frenchman’s Bay where the “Chrissy” would have hauled lobster traps under sail nearly 100 years ago. Watch for bald eagles, porpoises and seals. Sailing from the Bar Harbor Inn pier Purchase Tickets 6 PASSENGERS MAXIMUM Adults: $40 Children under 12: $30 CHARTERS & GROUP RATES Perfect for your family or group of six, or the perfect romantic getaway for two! 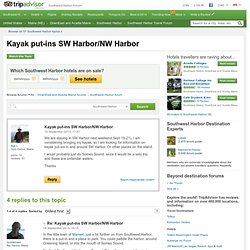 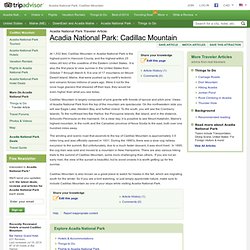 It is also the first place to view sunrise in the United States from October 7 through March 6. It is one of 17 mountains on Mount Desert Island, Maine, that were pushed up by earth's tectonic and volcanic forces millions of years ago. Were it not for the once huge glaciers that sheared off their tops, they would be even higher than what you see today. Cadillac Mountain is largely composed of pink granite with forests of spruce and pitch pine. Views of Acadia National Park from the top of the mountain are spectacular. 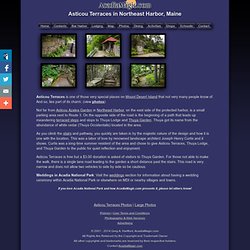 And so, lies part of its charm. (view photos) Not far from Asticou Azalea Garden in Northeast Harbor, on the east side of the protected harbor, is a small parking area next to Route 3. On the opposite side of the road is the beginning of a path that leads up meandering terraced steps and slops to Thuya Lodge and Thuya Garden. Thuya got its name from the abundance of white cedar (Thuya Occidentalis) located in the area. As you climb the stairs and pathway, you quickly are taken in by the majestic nature of the design and how it is one with the location. Asticou Terraces is free but a $3.00 donation is asked of visitors to Thuya Garden. Things to do in Seal Harbor: Check out Seal Harbor Attractions. 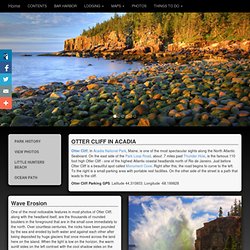 Along the way are many wonderful vantage points from which you may partake in this visual feast in all its splendor and it is highly recommended. Since this is on the east coast of Mount Desert Island, this whole section of Acadia National Park is perfect for watching a sunrise. Use utmost caution when near the cliffs. The rocks may be slippery and little bits of sand and rock particles can act like marbles causing you to slip and fall. Severe injuries can result. Note: Just prior to arriving at Otter Cliff, you may notice a road on the right called Otter Cliff Road. Puffin and Whale Watch Tours. Puffin and Whale Watch Tours Approximate Trip Time: 3 1/2 - 4 hours This is an incredible trip, fully narrated, on the gulf of Maine. 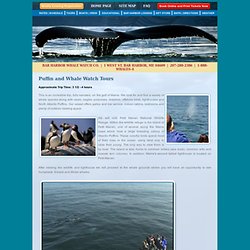 We look for and find a variety of whale species along with seals, eagles, porpoises, dolphins, offshore birds, lighthouses and North Atlantic Puffins. Our vessel offers galley and bar service, indoor cabins, restrooms and plenty of outdoor viewing space. We will visit Petit Manan National Wildlife Refuge. After viewing the wildlife and lighthouse we will proceed to the whale grounds where you will have an opportunity to see humpback, finback and Minke whales. Wildlife & Habitat - Maine Coastal Islands. 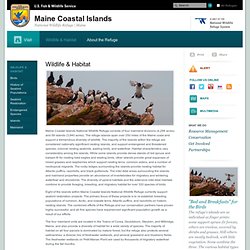 The refuge islands span over 250 miles of the Maine coast and support a tremendous diversity of wildlife. The majority of the islands within the refuge are considered nationally significant nesting islands, and support endangered and threatened species, colonial nesting seabirds, wading birds, and waterfowl. Habitat characteristics vary considerably among the islands. While some islands provide dense stands of red spruce and balsam fir for nesting bald eagles and wading birds, other islands provide great expanses of mixed grasses and raspberries which support nesting terns, common eiders, and a number of neotropical migrants.

The rocky ledges surrounding the islands provide nesting habitat for Atlantic puffins, razorbills, and black guillemots. Southwest Harbor Maine Region on Mount Desert Island features Acadia National Park Seawall. See virtual tours of the park. The next best thing to being at the tip of the quietside.