Purl Ridges « A Yarnified Life. Pjoning Videos. Bosnian Crochet: Slip Stitch on Its Own - Crochet Me Blog. One of the crochet techniques I am currently learning is Bosnain crochet. 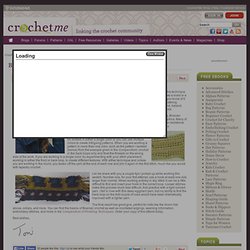 This technique uses slip stitches worked in the front or back loop of the stitch below to create a braid or a woven fabric. If you've never heard of Bosnian crochet, it may be because you know of it by a different name. Bosnian crochet is also known as shepherds knitting, påtning, pjoning, virkning, among other names gathered as it was worked in Scotland, Iceland, Norway, England Estonia, Sweden, Finland, Rumania, and former Yugoslavia. Bosnian Crochet. Hillevi's wristdistaff for securing fibers while spindling. 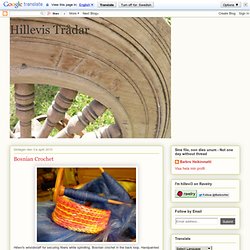 Bosnian crochet in the back loop. Handpainted yarn from Limmo-design. Spindle "Comet" by Tracy Eichheim at Woollydesigns. Fiber merino-silk from Das Wollschaf This blogpost about Bosnian crochet is an English version that is not translated, but completely re-written for Englishspeaking readers, thank's to Carol Ventura (dear Carol, you are a capable teacher, getting people to do things they have not thought of doing just by asking in a friendly way ;) of my blogpost in Swedish earlier this year.

First some clarifying information about where I live. Bilingual surroundings can sometimes cause confusion, because when you speak two or three languages in your everyday life, you mix things up. And now to the matter of this blogpost. Designing Vashti Slip Stitches. Above, 100% crochet slip stitches in "Maizy", a corn fiber sock yarn from Crystal Palace. 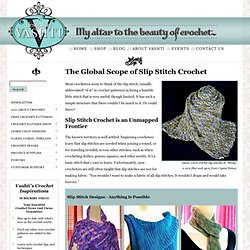 Most crocheters seem to think of the slip stitch, (usually abbreviated “sl st” in crochet patterns) as being a humble little stitch that is very useful, though limited. It has such a simple structure that there couldn’t be much to it. Or could there? Slip Stitch Crochet is an Unmapped Frontier The known territory is well settled: beginning crocheters learn that slip stitches are needed when joining a round, or for traveling invisibly across other stitches, such as when crocheting doilies, granny squares, and other motifs. How Many Kinds of Slip Stitches Are There? The “Dessert Party Apron” appears to be primarily tall triple treble stitches, but slip stitches actually outnumber them in this pattern, and are responsible for the overall dramatic effect.

Perhaps a venerable old subcategory of Slip Stitch Crochet influences these assumptions about what kind of fabric slip stitches produce. Unventing. I think I might have actually unvented something. 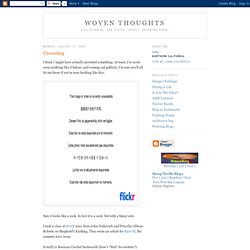 At least, I've never seen anything like it before, and coming out publicly, I'm sure you'll all let me know if you've seen knitting like this: Sure it looks like a sock. In fact it is a sock, but with a funny sole. I took a class at SOAR 2001 from John Yerkovich and Priscilla Gibson-Roberts on Shepherd's Knitting. They wrote an article for SpinOff, the summer 2001 issue. About.com: Ravenhill: A new technique to learn... I had never heard of shepards knitting before I came across it at the Norsk Folkemuseum. 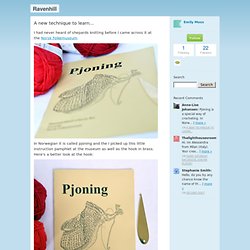 In Norwegian it is called pjoning and the I picked up this little instruction pamphlet at the museum as well as the hook in brass. Here's a better look at the hook: I like how shiny and pretty it looks. Shepherd's knitting is also known as panting, gobelinstitch, or Bosnian crochet. I sure want to make these mittens. These mittens are super cool looking. Hook, Yarn, and Needles the Old Stuff. Shepherd’s knitting also known as panting, gobelinstitch, pjoning, crochet de bosnie or Bosnian crochet. 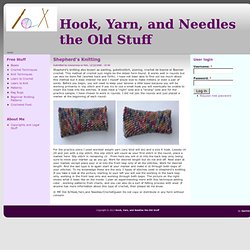 This method of crochet just might be the oldest form found. It works well in rounds but can also be done flat (worked back and forth). I have not been able to find out too much about this method but it does interest me and I myself would love to make mittens or even a pair of socks. Before you begin, you will need to keep your tension a little loose because you will be working primarily in slip stitch and if you try to use a small hook you will eventually be unable to insert the hook into the stitches. It does have a “right” side and a “wrong” side and for the practice sample, I have chosen to work in rounds.

For the practice piece I used worsted weight yarn (any kind will do) and a size K hook. . © ME Did It/Hook,Yarn,and Needles/CrochetQueen Do not copy or distribute in any form without consent. Slip Stitch Crochet Fabric. Slip Stitch Is More Versatile Than You Might Think:: Most of the crocheters I've interacted with have been unaware that they could be using slip stitch to create intriguing, distinctive fabrics. 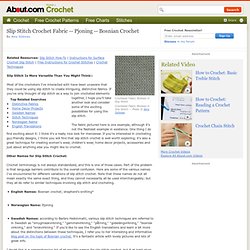 If you've only thought of slip stitch as a way to join crocheted elements together, I hope you'll take another look and consider some of the exciting possibilities for using the slip stitch. The fabric pictured here is one example, although it's not the flashiest example in existence. From Carpets to Jourabs. Fragment of 4th century carpet found in Scythian burial in Pazyryk, Altay mountain region of Russia Similar design to above fragment on modern carpet. 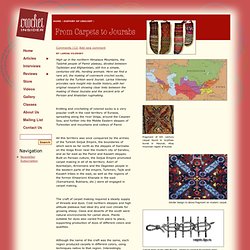 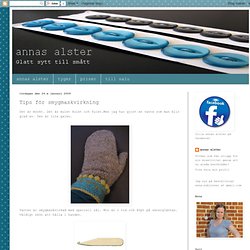 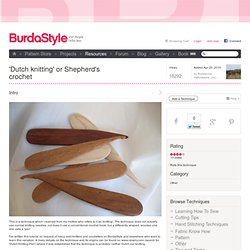 The technique does not actually use normal knitting needles, not does it use a conventional crochet hook, but a differently shaped, wooden one she calls a 'pen'. I've written this tutorial on request of many avid knitters and crocheters on BurdaStyle and elsewhere who want to learn this variation. A lively debate on the technique and its origins can be found on www.ravelry.com (search for 'Dutch Knitting Pen') where it was established that the technique is probably neither Dutch nor knitting. In honour of my mum I am going to be following our family tradition and continue to call this knitting in this tutorial. CROCHET - Bosnian Crochet. WkRoW13.pdf (application/pdf Object)