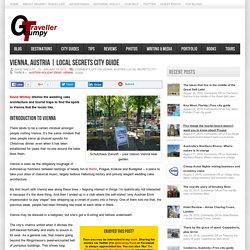 David Whitley ditches the wedding cake architecture and tourist traps to find the spots in Vienna that the locals like. Introduction to Vienna There tends to be a certain mindset amongst people visiting Vienna. It’s the same mindset that sees people serve up brussel sprouts for Christmas dinner, even when it has been established for years that no-one around the table likes them. Vienna is seen as the obligatory roughage of buttoned-up fustiness between lashings of heady fun in Berlin, Prague, Krakow and Budapest – a place to take your dose of classical music, largely tedious Habsburg history and prissily elegant wedding cake architecture. My first brush with Vienna was along these lines – feigning interest in things I’m realistically not interested in because it’s the done thing.

Vienna may be dressed in a ballgown, but she’s got a G-string and tattoos underneath. The overriding vibe that Vienna gives off is contentment. Bar addresses. Shopübersicht. Wien, 2. 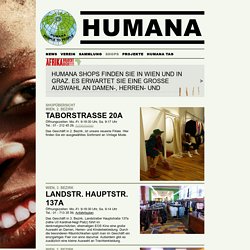 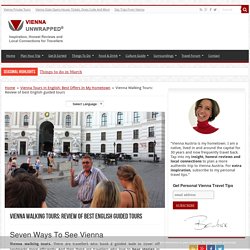 There are travellers who book a guided walk to cover off landmarks more efficiently. And then there are travellers who love to hear stories as they roam places that connect them more deeply with those. With a few great city walks being available, feel free to indulge in your own interests about Vienna: from Imperial history to Jewish Vienna. I’ve put together my favourite tours below for you. Introducing Vienna Tour guide Herbert, who leads this walk, is an attraction in its own right, according to his glowing customer reviews. Small Group Walking Tour This city centre walking tour lets you absorb Vienna’s history, architecture, people and culture in depth.

Walk With An Expert Intellectual Are you a history fan, work in the art sector, admire journalistic scrutiny or love writing? Vienna City Walking Tour An informative and fun tour for those who love to explore a city through historic anecdotes as much as hard facts. Themed Walking Tours. Golden Ages. Masterpieces of book art from the Gothic to the Renaissance. The late middle ages were a golden age for Austrian book art. 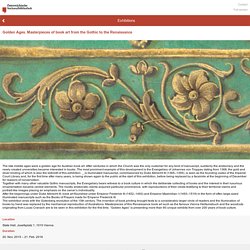 After centuries in which the Church was the only customer for any kind of manuscript, suddenly the aristocracy and the newly created universities became interested in books. The most prominent example of this development is the Evangeliary of Johannes von Troppau dating from 1368, the gold and silver binding of which is also the leitmotif of this exhibition. _ is illuminated manuscript, commissioned by Duke Albrecht III (1365–1395), is seen as the founding codex of the Imperial Court Library and, for the first time after many years, is being shown again to the public at the start of this exhibition, before being replaced by a facsimile at the beginning of December for reasons of conservation.

Together with many other valuable Gothic manuscripts, the Evangeliary bears witness to a book culture in which the deliberate collecting of books and the interest in their luxurious ornamentation became central elements. Location. Opening times & address - KUNST HAUS WIEN. Museum Hundertwasser. Public Library Vienna, Austria. Thrift Shopping in Vienna. Vienna is a great place for second-hand and consignment shopping! 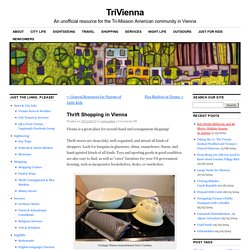 Thrift stores are clean (ish), well-organized, and attract all kinds of shoppers. Look for bargains in glassware, china, enamelware, linens, and hand-painted kitsch of all kinds. Toys and sporting goods in good condition are also easy to find, as well as “extra” furniture for your US government housing, such as inexpensive bookshelves, desks, or wardrobes. Vintage Riess enamelware from Caritas. Caritas, the Catholic charity, has two large stores in Vienna with pretty much everything from housewares to clothing. Humana stores specialize in clothing. The Vienna city animal shelter (Tierschutzheim) has a very nice fundraising thrift shop. Consignment stores are also very popular, especially for “dressy” or vintage clothes, including ball gowns and trachten. Like this: Like Loading...